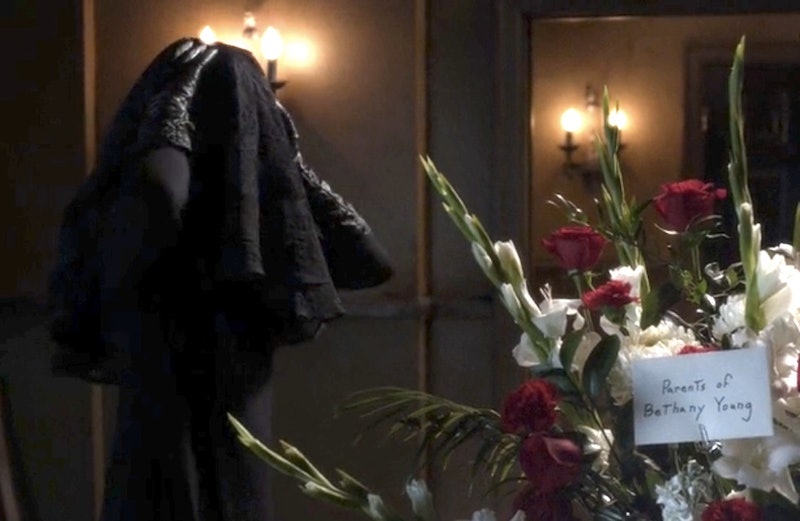 After what felt like an eternity without her, Red Coat returned to Pretty Little Liars last week, giving fans a crucial glimpse into her current whereabouts. She made not one, but two appearances in "FrAmed," both in Charles' lair and in a limo he's using. It was a significant appearance for a lot of reasons, namely because it was our first major confirmation that Charles and Red Coat are working together. After all, Red Coat's definitely been involved in her fair share of the PLL drama, but this is the first time we've seen her working with someone else. That said, even with this new information, things are murkier than ever — who is this incarnation of Red Coat? The PLL fandom has been just as abuzz with theories as ever, and one in particular has been making the rounds since Red Coat's big return: Are Red Coat and Black Widow the same person?

If you think about it, it actually makes a lot of sense. There are multiple Red Coats (Ali and Cece have both been shown wearing the iconic ensemble, and there's at least one more that we don't know of yet), so is it really that much of a stretch to think that one of them might be moonlighting as another enigmatic citizen of Rosewood? As Tumblr PLL theorist xjennax13 points out in her master theory, it would definitely explain why we saw Black Widow's costume in A's lair. She also argues that, logically, the hooded red coat/blonde wig/Ali mask combo don't exactly make sense for public wear... so why not don a different disguise for daytime appearances, like funerals? Also, both Black Widow's mask and Red Coat's coat were burned in the lodge fire — could it be because they were worn by the same person?

Some even think that the respective Black Widow and Red Coat costumes could denote different alliances — meaning, a double agent is in action, using different disguises for her different jobs. One Tumblr theory from wrenischarles ruminated on the possibility that Melissa could be using the Red Coat persona to work with Charles, and the Black Widow persona to work against him. It would certainly be a fun plot twist, no? Plus, it fits in quite nicely with all of the Melissa/Black Widow theories currently making the rounds.

So, Melissa's definitely a handy Black Widow/Red Coat candidate, but who else fits the bill? Well, Ashley Marin has always topped my personal list of Black Widow suspects… but I shudder to think she could be working with Charles, as "FrAmed" implied Red Coat has been (actively trying to harm her own daughter? Not likely, even in Rosewood). There's also Sara Harvey, who's been looking more and more like an undercover A Team member as of late (she was conspicuously absent in the very same episode that featured two appearances from Red Coat), and Jenna Marshall's always been a perennial favorite for both alter egos. For more theories and suspects, check out Bustle's PLL podcast.

We’ve also got CeCe, a former Red Coat (according to her Twitter profile, anyway), and you know who else has been known to don the red coat every once in a while? Alison DiLaurentis. She’s been laying low this season, but the little stunts she played on both her father and Lorenzo should serve as ample reminder that she hasn’t retired from shady shenanigans yet (it’s worth noting that neither Cece nor Alison fit the Black Widow’s distinctive silhouette — but we all know that anything can be explained away in Rosewood).

Could these two masked enigmas be one and the same? Well, there are only two weeks left to Pretty Little Liars' big summer finale, so IMK willing, we’ll find out soon.