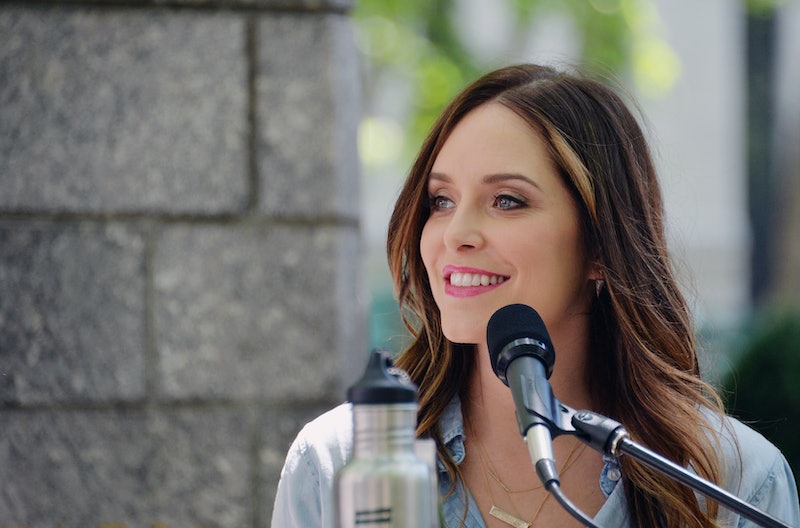 Because we just can’t get enough of The Bachelor and all its assorted programming, Bachelor in Paradise is adding another hour in the form of an after show, post Monday night episodes. The show is just a little chat sesh with Bachelor In Paradise stars and actual celebrities who care about and watch the show. It’s hosted by Chris Harrison and Jenny Mollen. Now, if you’re a Bachelor/ette fan, you’re probably acquainted with Mollen’s off-brand of humor, but if not, I’m here to help you out — Who is Jenny Mollen?

Joss Whedon fans may recognize Mollen from her days starring on Angel, where she played Nina Ash, but she also had parts in shows like Law & Order: LA ; CSI: NY; Suits ; Wilfred ; and Girls . Though she’s an actress, Mollen is an accomplished writer as well. She writes a column called The Smoking Jacket as well as an advice column for Playboy, and her book of essays, I Like You Just The Way I Am, hit number 12 on the The New York Times Best Seller list. Smart and funny? I love it. It’s also worth nothing that Mollen is married to American Pie and Orange Is The New Black star Jason Biggs, but let’s not mark her for who she’s married to, OK?

Mollen’s Bachelorette tweets are definitely what got her the gig as host of the Bachelor In Paradise After Show. Check out these gems:

Come on. Mollen is a Bachelorette genius. I’m so happy she’s hosting, because it’s pretty much just like having her in my living room to yell at the television with me when people start crying and screaming. The only difference is that we’re not eating any ice cream (which could very easily be remedied but I suspect that Harrison is on a strict diet). This After Show is a great addition to Bachelor In Paradise — it’s another example of how the show is not taking itself too seriously.