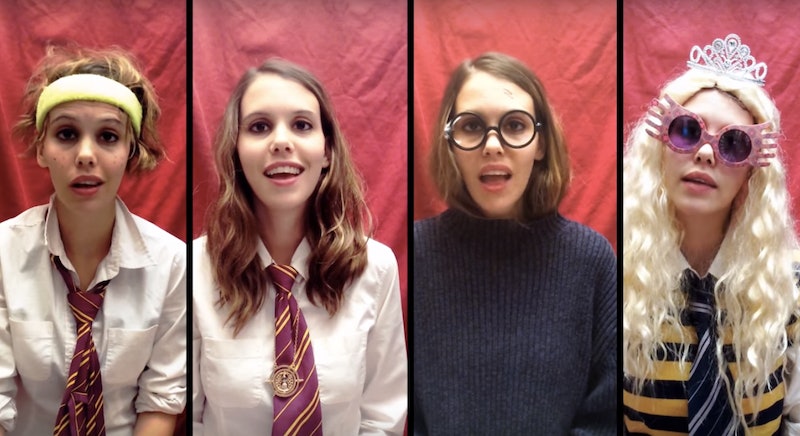 There are only two things I love in this world, and they are Taylor Swift and Harry Potter (sorry, family). But now there is a third thing that I love more than either of them: this mashup of Taylor Swift and Harry Potter created by bona fide genius and all around spectacular human Kate Parkin. She has masterfully rewritten pretty much all of Swift's 1989, donned Hogwarts outfits, and harmonized with herself as all of your faves. If I had an Amortentia potion in front of me, it would smell like this YouTube video. And grilled cheese.

Parkin, an L.A. based actor and singer, is known for her covers of pop songs and various Harry Potter parodies, which are all a gift to magic kind. This video in particular features Ron (who looks hilariously drunk the whole time), Harry (whose sweater game is on point), Draco, Voldemort, Luna Lovegood, and — not to be missed — Hermione, who basically narrates the whole thing like a BAMF and reminds us who was really in charge of keeping sh*t from hitting the fan at Hogwarts.

Because you are already wondering, YES, she did replaced "Bad Blood" with "mudblood," and the entire internet is kicking itself for not thinking of it first. (Just kidding. The entire internet is so grateful this happened that we have forgotten that we even have human flaws anymore.)

NOT ENOUGH? No problemo, because Parkin has miles of Harry Potter parodies to go around, including:

Do You Want To Build A Horcrux?

I'm seriously concerned that Kate Parkin and I were separated at birth? (Except that she took all the talent and YouTube prowess and I'm just sitting here fangirling at it?)

Sorry, Katy, this is the only version in my Muggle heart now.

I love that when you start looking for Harry Potter parodies the internet just basically becomes a blackhole deeper than a Dementor's kiss. But, like, in a good way.

#Bless your nerdy, talented heart, Kate Parkin. This is everything I never knew I needed in my life.