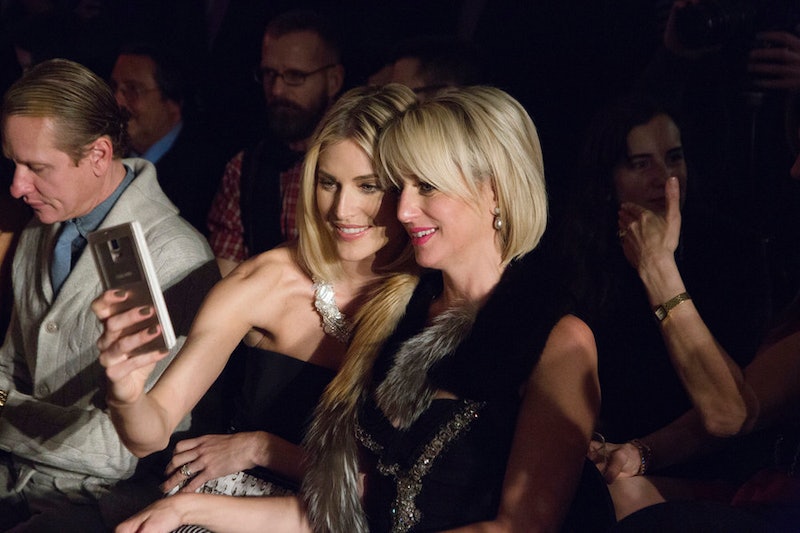 Even in just her first season as a Real Housewives of New York City cast member, there isn't much left unknown about Dorinda Medley — she's an open book so far. But Dorinda's husband, Richard Medley, has been mentioned but not described in detail. That makes some amount of sense, since Dorinda's new boyfriend, John, has been omnipresent during the season, while Dorinda and Hannah, her daughter, have been trying to move on from Richard's death in 2011. But, in a recent episode, Carole, who also has a deceased spouse, and Dorinda opened up about the deaths of their husbands on the show. It was a sweet moment between the two, and made them seem like real friends.

And, that piqued my curiosity about Richard Medley — he must have had a big personality to be with Dorinda, but he was also a notable New Yorker. He's not quite as famed as Carole's husband, who was literally tied to the Kennedys (his mother is Jackie O.'s sister), but Richard made a name for himself as a wealthy businessman and had a interesting, eclectic life right up until his death.

They Had A Somewhat Unconventional Wedding

When you hear that two famous New Yorkers are getting married, you normally think of a big event wedding that will be covered by every major newspaper... and that's what the Medleys had, even though some of the details were totally unique. Instead of a super long white fluffy dress, stuffy dinner, and boring reception, they went for a 1950s-style party complete with cigarette girls, according to NY Magazine's profile on the occasion.

Richard Was A Highly Successful Businessman

Richard Medley was a hedge fund manager and had a widely successful career, according to an article from Bloomberg Business. You can get a hint of how smart Richard was about contemporary economics on Lisa Wexler's talk show.

He Also Worked In Politics

In addition to his career in finance, Richard was a speechwriter for Geraldine Ferraro — the first woman to run for Vice President and be on any Democratic or Republican Presidential ticket at all. That makes Richard a fundamental part of American political history, and makes him much more interesting than the average finance guy working on Wall Street.

He Died Tragically From Liver Failure

In the words of his Bloomberg obituary, Richard succumbed to "a brief illness" in 2011. Radar Online was able to determine that illness lead to some form of liver failure, but Dorinda has remained private about why Richard fell ill. On RHONY, she described taking care of Richard at the end of his life as an "honor," but you can hear in her voice that the time wasn't easy for her.

He May Have Visited Dorinda After His Death

According to Dorinda during the RHONY psychic trip, after Richard's death, a balloon mysteriously rose and floated in her room. While she acknowledges that it sound pretty ridiculous, she doesn't deny that it provided a sense of closure.

Richard and Dorinda were known for their philanthropic efforts, and Dorinda carries on the tradition by working with places like Smile Train.

He Must Have Had A Love For Family

I just can't see Dorinda marrying anyone who wouldn't take on her daughter as his own — and Richard had two biological children also, so he must have known the importance of family.

Richard Medley has been mentioned a few times on the show, and Dorinda's anecdotes always make him sound like he was a perfect match for her. That's probably because he was incredibly smart and successful in business, must have cared deeply about family, and even took the time to be philathropic. He was the total package, and it's no wonder the rest of the Real Housewives of New York cast can be tough on Dorinda's boyfriend John. He has a lot to live up to.