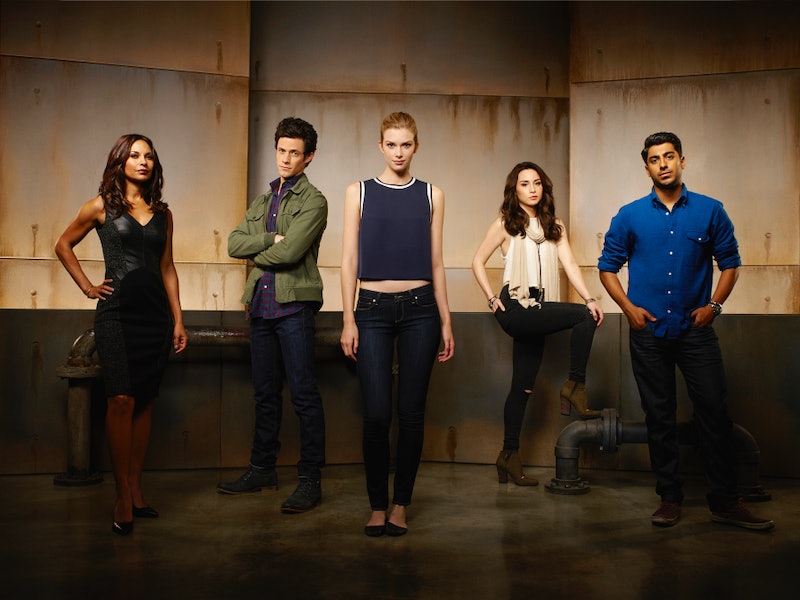 Nope, I refuse to believe it's even possible. In the Stitchers finale on Tuesday night, Cameron may have died. That's right folks, Season 1 ended with a cliffhanger that suggests the series may have offed one of its very best characters. But I just cannot entertain this theory! Cameron cannot be dead, this is not happening! And to make matters worse, Detective Fisher was shot and could potentially die as well. Alright, let me gain my composure a little here so we can talk things through, fellow Stitchers fans.

Before the horrible ending, Cameron gave Kirsten permission to stitch into his memories. Kirsten had discovered that she wasn't born with temporal dysplasia and that she stitched into her mother which led to her death. I would be seriously scarred after a revelation this shocking. Kirsten learns through Cameron's memories that she and Cameron had actually met before when they were kids. But of course, as with her mother, there was a risk of death when stitching into a live person (thus the team's normal approach of stitching into dead people). And in the end, Cameron flatlined on the table. But here's the thing about this potential death, would the show really be so insane as to kill off someone who has become so integral to the team?

I know that it could be argued that killing Cameron would bring a surprising twist and a fresh new look to the show now that it has been renewed for Season 2. Plus, on Tuesday night's finale Cameron did train Camille to take over the Stitchers program from him, so it's not as though the entire program would fall apart if he did die for good. But come on! It's just a terrible idea!

For one, we've already gotten episode after episode of Kirsten and Cameron bonding, becoming friends and potentially have feelings beyond friendship. We already know that Kirsten and Cameron are perfect for each other. And we now know that Cameron and Kirsten knew each other as children, which means their connections and feelings go deeper than we could have possibly imagined at the start of the show when Kirsten kissed Cameron at the end of her first stitch. (Remember those days? We were so young, so naive). So why would the show give us all of these amazing moments of Camsten, just to rip it and our hearts to shreds? I just can't see it happening, I can't believe Cameron is gone for good. Season 2 will vindicate me, I can feel it. Is it time for Season 2 yet?

More like this
The 'PLL: Original Sin' Creators Say A’s Identity Will Be “Very Clear” By The Season Finale
By Alyssa Lapid
Candace Cameron Bure & JoJo Siwa Talked Out Their “Rudest Celebrity” TikTok Drama
By Grace Wehniainen
Jamie Foxx Revealed The Question That Got Cameron Diaz To “Un-Retire”
By Grace Wehniainen
What’s New On Netflix: 'Never Have I Ever' & 'Indian Matchmaking' Return
By Arya Roshanian
Get Even More From Bustle — Sign Up For The Newsletter