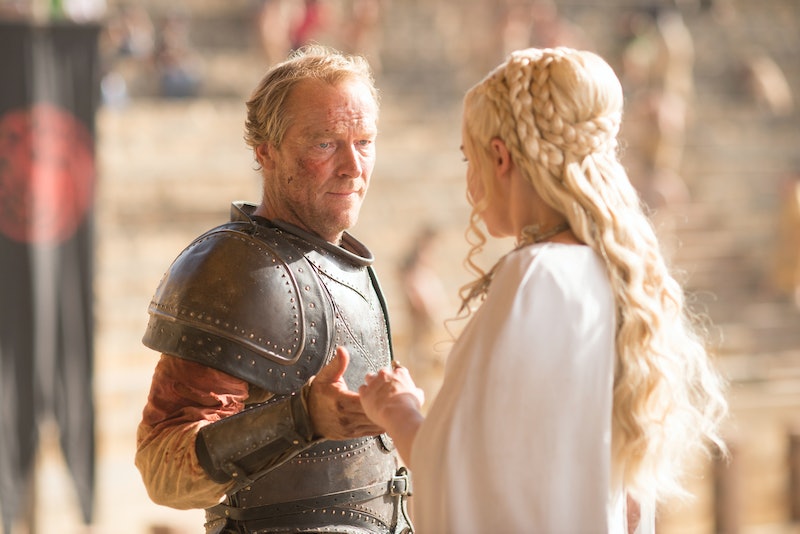 Pop quiz: Can you name every character that died in Season 5 of Game Of Thrones ? Sure, you can probably name most of the big ones like Jon Snow and Stannis Baratheon. But, how many deaths do you think actually happened in the span of those 10 episodes? Five? Ten? A dozen? Would you be surprised to learn that 16 characters died this year? And I'm not even talking about anonymous soldiers and bystanders and Sons of the Harpy; I'm talking about named characters with speaking lines. So which characters on Game of Thrones Season 6 will die next?

If Season 5 accomplished anything, it reinforced the idea that absolutely no character is safe, no matter how beloved they are or how major of a part they play in the story. I thought I'd learned that when Ned got his head chopped off in Season 1. I thought I'd learned it again when the Starks were slaughtered at the Red Wedding in Season 3. But nothing prepared me for the bloodbath that was Season 5; particularly the cliffhanger death of fan-favorite Jon.

Well, they won't catch me or other fans off guard again. It's time to start steeling ourselves for Season 6; in pursuit of that goal, I've put together a list of the characters most likely to die, so you can start the process of mourning them now. In honor of last season's 16 fallen, I've chosen the 16 next candidates for the chopping block, ranked from least to most likely to suffer a grisly fate. [Book spoilers ahead!]

With papa Tywin Lannister and psychotic son Joffrey both dead and buried, Cersei remains the last true villain of GoT. (The Boltons are bad, but they're not exactly final boss material.) For this reason, the Queen Mother remains fairly safe... for now. Maggy the Frog's prophecy did promise Cersei that she would perish at the hands of the valonqar (High Valyrian for "little brother"). Every other part of the witch's prophecy has come true so far, so it's only a matter of time before Cersei kicks the bucket. The only question that remains is, how long will the writers wait to pull the trigger?

Checks in the "plus" column: Podrick is so unassuming no one would possibly want to kill him, and he has fierce warrior Brienne of Tarth to protect him. Checks in the "minus" column: Podrick is currently in a spot of mortal danger in the books with the Brotherhood Without Banners... and if Shireen is any indication, the writers may choose to kill him off simply because they know it would break our hearts.

This character has had "expendable" written all over him since his first appearance. He's the gruff-but-lovable sidekick-type who puts himself in danger for less disposable characters (Tyrion, Jaime), and whose motor mouth is bound to land him in trouble some day. Plus, the writers have already used up all the character's book material — and then some. But, then again, Bronn has survived this long; maybe he'll actually be the last man standing, the Westerosi version of an indestructible cockroach.

Yes, Dany is fond of him. Yes, he's good with a sword. Yes, he's got a great butt. But, is anyone actually that attached to the guy? Offing Dany's paramour would be a great way to wring some pathos from her storyline without actually upsetting viewers too much.

Roose is so low on this list for the same reason as Cersei: Yes, he has to go eventually, but probably not yet. Every drama needs a good villain, and so far there's no one on GoT who seems ready to step in and fill the void should Roose shuffle off the mortal coil anytime soon. And, besides, he's got a son who could do with some dying first...

Tommen's new bride better watch her back. Now that Cersei's out of that prison cell, she's sure to be seeking some unholy vengeance with the help of her FrankenMountain. The death of the beautiful Tyrell queen would certainly be shocking at this stage in the game — but that's why I have a sneaking suspicion it might be more likely than any of us suspect.

The Red Priestess has never been particularly well-liked, what with her penchant for burning people at the stake. But, with her cold-hearted murder of adorable Princess Shireen last season, Melisandre jumped to the top of pretty much everyone's Must Die list. Of course, there are a couple of factors hindering a satisfyingly bloody retribution for the sorceress. First, she absolutely has to resurrect Jon Snow. And secondly, she promised Arya back in Season 3 that they would cross paths again. She has to do both of these things before she can die. But, if they have both happened at any point in Season 6, consider Melisandre fair game.

Cersei Lannister has never been one to ignore a perceived slight against her — so just imagine what she'll do once she gets her hands on the man who threw her in a dreary dungeon, then stripped her naked and forced her to march through the streets of King's Landing for all to see. Now that she's got the reanimated corpse of Westeros' greatest fighter at her side, all of the queen's adversaries should be quaking in their boots... and the High Sparrow is Cersei Enemy #1.

The escaped convict formerly known as Reek has gone too far and done too many terrible deeds to ever find true "redemption." He may not have killed Bran and Rickon, but he did murder two innocent orphans instead, betrayed his adopted family, and beheaded Rikard Karstark. Helping Sansa escape from Winterfell may be as close as he ever gets to atonement. So now would be a logical time for him to go... especially considering the fact that a preview chapter from The Winds Of Winter reveals that Stannis (who's still alive in the books) plans on beheading the Greyjoy scion as a sacrifice.

If his propensity to throw himself in harm's way for his beloved Dragon Queen wasn't enough to paint a target on Ser Jorah's back, there's also the fact that he recently contracted greyscale, a mysterious disease with an unenviable survival rate. (In fact, Shireen is — or was, rather — the only known survivor.) The exiled knight is a ticking time bomb, and we can only hope he dies before he manages to reach Westeros and infect the continent with an epidemic of unstoppable skin disease.

How do you think a prince — a prince who has already given you your last warning, no less — would react to the news that you have killed an innocent young girl against not only his express wishes, but all basic human decency? Yeah, I'm betting that justice would be swift. And, I hope it is for Oberyn's paramour, who took her quest for vengeance waayyy too far when she gave poor Myrcella that poisoned kiss.

Ugh. Just die already, amiright? Many GoT viewers went into the Season 5 finale expecting to finally see the Bastard of Bolton receive his long overdue comeuppance, perhaps at the hand of Sansa during her escape of Winterfell — only for Ramsay to emerge from the hour unscathed, while seemingly a dozen of characters we actually cared about bit the dust. Yeah. It's time to make up for this one, writers.

During Season 5's opening flashback, Maggy the Frog predicted that Cersei would bear three children... and all three of them would die. Well, we all know what happened to Joffrey in Season 4. And Season 5 ended with the shocking murder of Myrcella at the hands of Ellaria Sand. Little King Tommen better be watching his back, because he's next in line. Of course, as everyone in Westeros knows, "All men must die." And there's actually no indication in Maggy's prophecy that Cersei's children will die before her — just that their shrouds will be "gold." Tommen may very well have been able to live into old age... but something tells me that Cersei's overzealous efforts to protect her sole remaining child will inadvertently (and tragically) lead to his death.

OK, the last three entries on this list are kind of cheats: These characters are already dead in the books, so it's really only a matter of time before they bite the dust onscreen, too. A Dance With Dragons ends with Varys returning to King's Landing from across the Narrow Sea and murdering the ineffective Maester in his chambers in the Red Keep.

The second of Varys' casualties is Tywin's younger brother. Kevan proved himself to be a far more effective leader than anticipated, shoring up alliances previously damaged by Cersei while she was locked away in the Sept of Baelor. Varys, who we learned last season is a Targaryen supporter, can't have that; in the books, he murders Kevan to incite unrest that will ideally pave the way for a Targaryen invasion. Cersei will blame the Tyrells for her uncle's death, the Tyrells will blame Cersei, someone will inevitably blame the Martells... and Westeros will fall into chaos.

It's really hard to believe that the King of the Iron Islands hasn't died already. When Melisandre put three leeches in the fire back in Season 3, she named one after Robb, one after Joffrey, and one after Balon. The former two have since perished, but not the latter — even though he's the first of the three to die in the books, falling off a bridge halfway through A Storm Of Swords. Onscreen, Balon hasn't even been seen since the Season 3 finale, with the Iron Islands all but a distant memory in Seasons 4 and 5. But, with the recent news that Game of Thrones is casting the role of Euron Greyjoy, Balon's younger brother who claims the Seastone Chair for himself after Balon's death, viewers can expect to finally witness the Greyjoy's demise in Season 6.

So, now that we're all prepared for the impending Season 6 doom, it's time to go back to imagining how Jon Snow will come back, right?