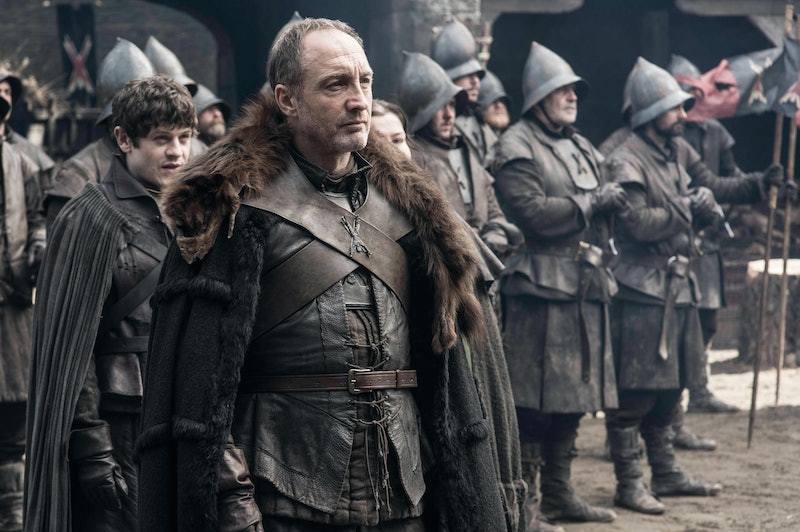 I know, I know — life's not fair. We're all told that a thousand times while we're growing up. But that doesn't make it any less painful every time the world doles out something that feels excruciatingly unfair... like, say, Jon Snow's brutal and traumatizing murder in the Game Of Thrones Season 5 finale. (I'm definitely not still harboring a grudge against the writers, why do you ask?) If they had to kill someone, they've certainly populated their show will plenty of attractive targets. Why not kill off one of the many despicable Game Of Thrones characters who actually deserve to die?

I know, I know — Jon's probably coming back next season, whether by being resurrected by Melisandre or warging into Ghost or becoming a White Walker or whatever. But still; watching a bunch of surly men use Jon's torso as a pincushion was excruciating. (It was such a lovely torso, too...) I'm even more worried going into Season 6, since Thrones is now officially operating away from George R. R. Martin's predetermined A Song Of Fire and Ice book series. Specifically, I'm afraid showrunners David Benioff & D.B. Weiss will take the opportunity to gleefully massacre even more of our favorite characters.

So, before they bump off someone truly heart-wrenching (stay safe, Podrick!), here are 12 characters Benioff and Weiss should consider killing first:

This conniving plotter truly cares about no one but himself, and I'm starting to get the sense that Littlefinger won't stop his scheming until he's clawed his way all the way to the Iron Throne — no matter how many bodies pile up in his wake. His one (sorta) redeeming quality was his genuine devotion to Catelyn — and, by extension, her daughter Sansa. But, he still didn't hesitate before selling Sansa into a loveless marriage to Westeros' most sadistic bachelor. Petyr Baelish must go at some point... but not before some more mustache-twirling villainy, first.

Man, Sansa's really got a knack for picking up the whack jobs, doesn't she? Although she was relieved to learn that Theon hadn't really killed her brothers Bran and Rickon, we should remember that he still murdered two innocent boys — and Rodrik Cassel and Maester Luwin and everyone else who died in the siege of Winterfell. He's on his way to redemption, bumping off Myranda (literally) and helping Sansa escape Ramsay's clutches, but Theon's too far gone for his story to end anywhere other than death.

Cersei did a great job of dispensing with anyone who could actually give her good advice (her uncle Kevan, for instance) and instead filling her Small Council with sycophants and buffoons. All except for Qyburn, that is. The disgraced former Maester is the exception to the rule — and that makes him dangerous. He successfully reanimated the corpse of The Mountain and seems to have transformed him into some sort of loyal Frankenstein's monster. Things didn't end so well for Dr. Victor Frankenstein, and they probably won't for Qyburn, either.

Ugh. This guy seriously gives Westerosi sex workers a bad name. The former lover of both Oberyn Martell and Loras Tyrell showed how little loyalty he possessed when he instantly caved under the pressure of the Sparrows and outed Loras in court — resulting in both Loras' and Margaery's imprisonment. Unacceptable. Hey hey, ho ho, Olyvar has got to GO.

Speaking of the sparrows... this dude is the worst. Like pretty much everyone on the show, he's seeking power... but unlike pretty much anyone else on the show, he's not seeking it for himself, but instead in the name of his gods — and that makes him incredibly dangerous. He doesn't quiver in the face of loyalty, as both Margaery and Cersei learned, to their chagrin. And, even worse, he banned wine, gambling, and brothels! Talk about a debbie downer. Someone better take him out before he reverts all of Westeros back to the joyless Stone Ages.

HE KILLED JON SNOW. Honestly, the only reason he's not higher on the list is because he's still at such an impressionable age and his entire family was slaughtered in front of his own eyes.

Crotchety old Alliser doesn't have Olly's excuse, so he gets a higher slot — even though Olly's the one that delivered the finishing blow to Jon. This surly knight has been a pain ever since Season 1, and at this point, I'm basically hoping that Jon Snow will come back to life just so he can do to Alliser what he did to Janos Slynt. (As long as he dies before he has the chance to be turned into a wight, or else we'll be stuck with zombie-Alliser — which is honestly only marginally more appealing than regular-Alliser.)

Booo! Hisss! Now that Tywin Lannister is dead, Roose Bolton is basically the big bad of the show. He's so evil that some fans have concocted a legitimate theory that he might be a vampire. (Read up on it, there's a surprising amount of textual evidence!) He betrayed the Starks, orchestrated the Red Wedding, allowed his bastard son to torture Sansa, and is generally the all-around worst guy in Westeros. Why is he not higher on the list? 1) Every good show needs a good villain. 2) As bad as he is, I actually want the following people dead even more.

Not only is she a convenient scapegoat for everything that was terrible about Season 5's Dorne storyline, but Ellaria was also just generally THE WORST on her own merits. She refused to listen to reason, obsessed with getting vengeance for her lover's death (even though Oberyn was killed in a trial by combat that he volunteered to participate in), and somehow thought that an appropriate response was the cold-blooded murder of an innocent child who had absolutely nothing at all to do with anything she was upset about... except bearing the Lannister name, of course. If Season 6 doesn't start with Doran executing Ellaria, I will lose all respect for the Dornish prince.

Admittedly, this guy is mostly here out of necessity. Yeah, he kinda sucks; but the real reason Balon needs to die is because of Melisandre's leeches. (Book spoilers!) Remember when Melisandre named three leeches after Robb, Joffrey, and Balon, and threw them all in a fire? Well, the first two died but the latter is still alive and kicking — despite the fact that his book counterpart died way back in the third novel! Given the Thrones writers' propensity for violence, it's very unusual that they would pass up an opportunity for a grisly death scene. So where is it, guys? Don't skimp out on us now!

The Red Priestess has been burning people alive since literally the very first time audiences met her; and yet, the full weight of the atrocities she was committing in the name of her god weren't fully driven home until the victim at her stake was the young, innocent, adorable Princess Shireen. Now, one thing that every Thrones fan can agree on is that Melisandre needs to die. The only reason she's not number one on this list is because we need her to help bring Jon back to life before she's allowed to kick the bucket. After that? I'd gladly push her off a cliff myself.

Do I really need to explain this one? Just looking at his stupid little face is giving me the creeps right now. Ramsay is like his father, except with absolutely no discretion (at least Roose knows how to play the game of thrones) and with the sadism dial turned up to 11. He literally lives only to torture and humiliate. I know I wasn't alone in expecting the Bastard of Bolton to bite the bullet in the Season 5 finale, either at Stannis's hand or Sansa's. The fact that he lived through the season while Jon Snow did not is frankly offensive.