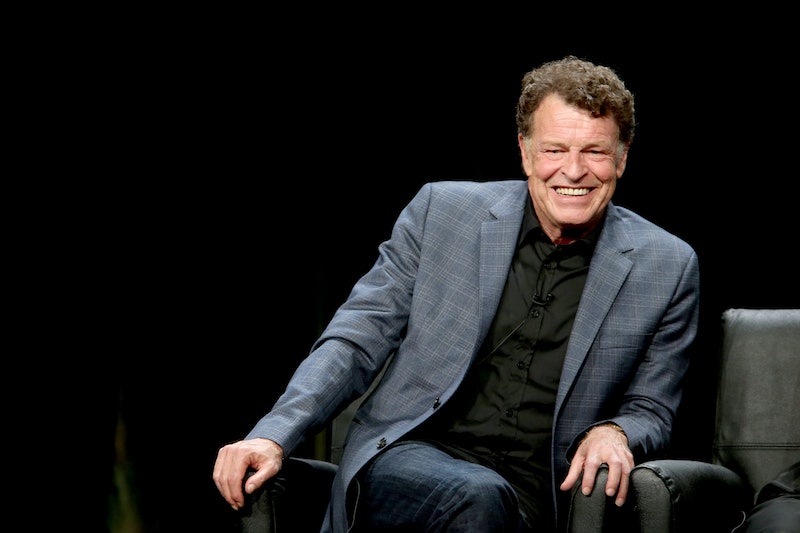 The most recent season of CBS's Sherlock Holmes crime procedural Elementary ended with the famous detective, recently relapsed into his heroin addiction, awaiting the arrival of his father in New York City. For three years, viewers have heard rumblings about the strained relationship between Sherlock and his domineering father, but the writers waited patiently until Season 4 to actually introduce the intimidating patriarch. News broke this June that Australian actor John Noble would be joining Elementary in the upcoming season as a series regular in the role of Holmes' dad, and Entertainment Weekly has just unveiled the first look at Noble in character.

American viewers first became aware of Noble due to his unhinged performance as Boromir's grieving father Denethor in The Lord Of The Rings: The Return Of The King. Television audiences will be familiar with the actor from his recent work on FOX's Sleepy Hollow, where he portrayed Sin Eater Henry Parrish — aka Ichabod and Katrina's diabolical son and the Horseman of War. But Noble is most famous for his work on the cult favorite FOX sci-fi series Fringe, where he played lovable mad scientist Walter Bishop. For five years, fans campaigned for Noble's complex and brilliant performance to be recognized by the Emmys, but to no avail. Could this new, highly-anticipated role be the one that finally catches the attention of the Television Academy?

Noble's appearance on Elementary will likely make casual Sherlock fans wonder if we've ever met the famed detective's parents in any previous adaptation. In fact, details about Holmes' early life are scarce to nonexistent in Sir Arthur Conan Doyle's novels. The only time Sherlock mentions any relatives other than his brother Mycroft in any of the author's 60 short stories was in 1893's The Adventure Of The Greek Interpreter, in which he stated that, "My ancestors were country squires... my grandmother... was the sister of Vernet, the French artist." That's all, in 40 years of publication.

In the 88 years since Doyle's last Sherlock story was published, the act of creating non-canonical backstories for Holmes and Watson has become known by fans as "Holmesian Speculation" or "The Sherlockian Game" — or even, among inner circles, simply "The Game." Players of "The Game" take clues from Doyle's text and combine them with real-life historical events from the time Holmes would have been alive in an attempt to craft a biography of the character as though he were a living person. Sherlock Holmes scholar Dorothy Sayers has been quoted as saying that, "The game must be played with one's tongue firmly in one's cheek, but with all the seriousness of a game of cricket at Lords."

Theories on Sherlock's father, according to the game, have varied from a Captain with the East India Trading company to a vampire named Radu the Handsome, the younger brother of Vlad the Impaler. (Yes, that would make Sherlock Dracula's nephew.) One of the most intriguing theories, published by Robert D'Artagnan in his 2001 novel Sherlock Holmes's Last Case, states that the detective was adopted by Gregory C. Holmes and his wife Lydia Mycroft, but that his biological father was a man named Mark Moriarty and Sherlock's real name was Joseph Moriarty... the younger brother of Professor James Moriarty, Sherlock's chief nemesis.

Has any iteration of Holmes's father ever appeared onscreen before? While it might take weeks to comb through the dozens upon dozens of big- and small-screen adaptations of the character, there are at least two major instances that come to mind. In the 1985 film Young Sherlock Holmes, featuring the teenage detective at boarding school, British actors Roger Brierley and Vivienne Chandler were cast as Mr. and Mrs. Holmes. And, more recently, BBC's popular Sherlock series starring Benedict Cumberbatch introduced viewers to Holmes's parents in a brief scene in the first episode of Season 3, "The Empty Hearse."

In this version, the elderly Holmeses were portrayed as exceedingly ordinary parents in London for an evening of musical theatre on the West End. Of course, Sherlock was quick to escort them out as soon as Watson arrived, cutting the family reunion short. Interestingly, it was a family reunion behind the scenes as well: Mr. and Mrs. Holmes were portrayed by Cumberbatch's real-life parents, Timothy Carlton and Wanda Ventham.

So while we have glimpsed Sherlock's parents at least a few times before, Noble's starring role on Elementary will likely be the largest focus on a first-generation Holmes yet. If anyone can do the mysterious character justice, it's definitely the talented Fringe star. Personally, I'll be hoping for the climactic Season 4 finale revelation that Mr. Holmes is, in fact, a vampire named Radu the Handsome. Honestly, anything less would be a letdown at this point.

More like this
The Office Lego Set Includes All Your Favourite Dunder Mifflin Characters
By Sam Ramsden
Here’s How 'House Of The Dragon' Diverges From The Book’s Timeline
By Allyson Johnson
The 'House Of The Dragon' Showrunners Revealed One Key Similarity With 'GoT'
By Grace Wehniainen and Kadin Burnett
Everything To Know About 'And Just Like That...' Season 2
By Jack Irvin
Get Even More From Bustle — Sign Up For The Newsletter