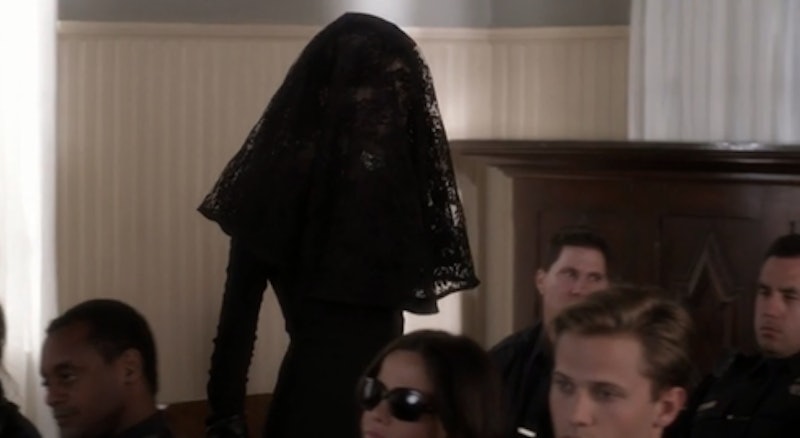 We’re so close to the Pretty Little Liars "Summer of Answers" reveal that I can taste it, Rosewood aficionados. Of course, I’m dying to know everything about A's identity, but there are so many more things that come along with finding out who Big A is, like who killed Toby’s mom, who hit Ali with a rock, and, most intriguing to me especially, who is Black Widow? We’ve only seen this curious character a handful of times in six seasons of Pretty Little Liars, but I just can’t stop thinking about her identity. Does she work with A? Is she the same person as Red Coat? Is she friend or foe to the Liars? Thanks to that answer-filled finale, we finally know that Sara Harvey is Pretty Little Liars ' Black Widow.

What does that even mean? Let me catch you up if you’ve been out of Pretty Little Liars land for too long. We first met Black Widow at Detective Wilden’s funeral. She showed up as a mourner for the dead crooked cop, obscuring her face with a very intricate black lace veil. We've also seen her removing the veil, only to reveal an Alison mask. Super creepy, right? Now that we know the Black Widow’s true identity, it totally makes sense.

You see, CeCe, aka Big A, told Ali that she hired Sara Harvey to be her extra set of eyes when it came to her twisted game. We learned earlier in the episode that Wilden, CeCe, and Mrs. DiLaurentis were the only three people on the planet who knew that CeCe hit Ali with a rock in the noggin (not on purpose of course). When CeCe saw Wilden snooping about, she knew that he would never let Ali come home since she was alive, which did not please CeCe, as she really wanted her sister around. So, she offed Wilden and had Sara go to the funeral (veiled, of course) to make sure that the stiff was really, well, stiff. I always thought there was something fishy about that Harvey chick.

For more on Pretty Little Liars' many mysteries, check out Bustle's podcast Taking This One To The Grave below.