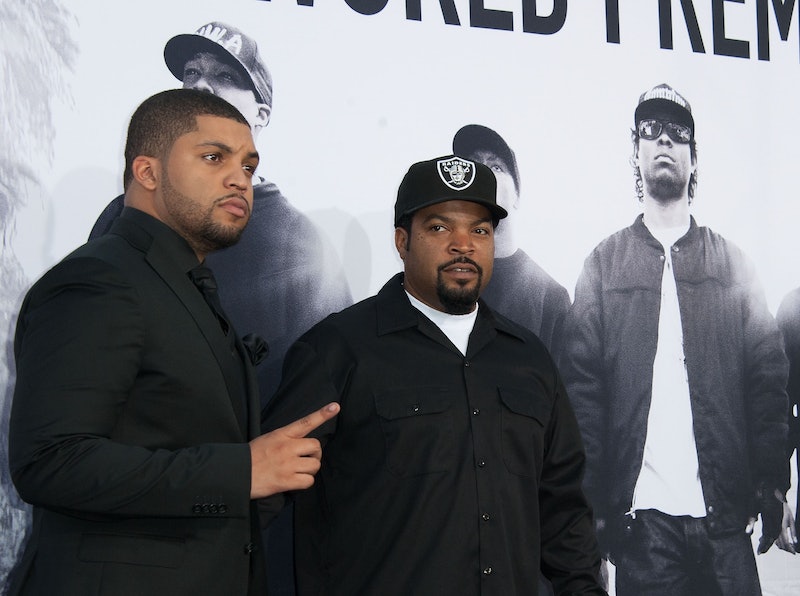 NWA members Eazy-E, MC Ren, Ice Cube, Dr Dre and DJ Yella, earned a place in hip hop history with their 1988 album Straight Outta Compton, but the success soon tore the group apart after only four years. Their rise to fame and eventual implosion is all documented in the new N.W.A biopic, Straight Outta Compton (out Aug. 14). The film focuses on the founding of N.W.A and their rise to fame, as well as their eventual downfall; towards the end of the movie, it even hints at an eventual reunion between the split-up group. But did N.W.A. ever reunite?

The answer? Sort of. The group (minus founding member Eazy-E, who died in 1995), came together a handful of times after their split, although their performance earlier this year at the BET Experience Show marked their first actual reunion in 26 years. Getting the group back together was an emotional experience for many fans, considering N.W.A.'s troubled history — almost immediately after they hit it big in 1988 with Straight Outta Compton, the cracks began to show. First, there was the issues surrounding Ice Cube. The group's most prominent MC, he left to pursue a solo career in 1989, releasing AmeriKKKa's Most Wanted and creating his path to solo stardom. Two years later, he made his big screen debut in Boyz n the Hood and paving the way for a successful movie career. Now, two decades later, Ice Cube has a few successful film franchises to his name (including Ride Along, Barbershop and Friday), not to mention the dozen or so albums he's released since N.W.A.

Yet despite his past feuding with N.W.A.'s former members, Ice Cube was a critical part to getting Straight Outta Compton made. In fact, he acted as a producer on the film alongside fellow N.W.A. member, Dr. Dre; DJ Yella and MC Ren also consulted on the film.

Ice Cube and Dr Dre are probably the most widely known N.W.A. members, at least in today's pop culture world. After the group disbanded, Dr Dre co-founded Death Row Records with Suge Knight and began working on a solo career, which included engaging in a feud with Eazy-E. Dre went on to become one of the most respected rap producers in the music industry — he molded Eminem's career, among others — and is also a (very) successful businessman. This month, Dre released his first studio album in 16 years, inspired by the film, called Compton: A Soundtrack , which features a handful of all star collaborations.

Meanwhile, MC Ren has also maintained his career in the music industry, though he's perhaps not as widely known as Dr Dre or Ice Cube. Following the disbanding of N.W.A in 1992, MC Ren stuck with the group's label, Ruthless, releasing his own solo album and writing for Eazy-E, who also went on to have a successful solo career. Eazy-E continued to work in the music industry until he died from complications due to AIDS in 1995 — a tragedy that is featured in the movie, when Ice Cube (played by the rapper's son O'Shea Jackson Jr.) and Dr Dre (Corey Hawkins) visit an unconscious Eazy-E in the hospital.

After Eazy-E's death, DJ Yella quit producing music and moved to other artistic pursuits: directing pornography. However, Yella recently decided move on yet again, and the N.W.A producer has returned to his original passion of music. "Now I'm back to DJing. That's my passion. I've been to Paris, Australia, Canada. That's my thing now. I still DJ the same way, but I'm not a scratch-scratch-scratch battle DJ. No, I'll rock the house. I'm old school," he told The Daily Beast.

With Straight Outta Compton, founding members Ice Cube and Dr Dre hope to put N.W.A. back into the public consciousness. After all, many young people have barely even heard of the rap group that created a cultural movement in the late 1980s with their explosive single "F*ck Tha Police"— they weren't even alive when N.W.A. broke out in 1988 with their signature album, Straight Outta Compton. However, the harsh realities of police brutality, poverty and violence exposed in the group's classic album remain just as prevalent.

"I'm black, male and young so what's happening to me is likely to be happening to N.W.A's audience. Some police overuse their authority, they judge you on what you wear instead of how you are. They stereotype you; make you get out your car, get you face down on the ground and then start questioning you. If I was white and in another neighbourhood, they would not do that," Ice Cube said in a 1989 interview that's still sadly relevant today.

Straight Outta Compton may chronicle the early days in the lives of N.W.A. members, but its importance transcends any trend or time.