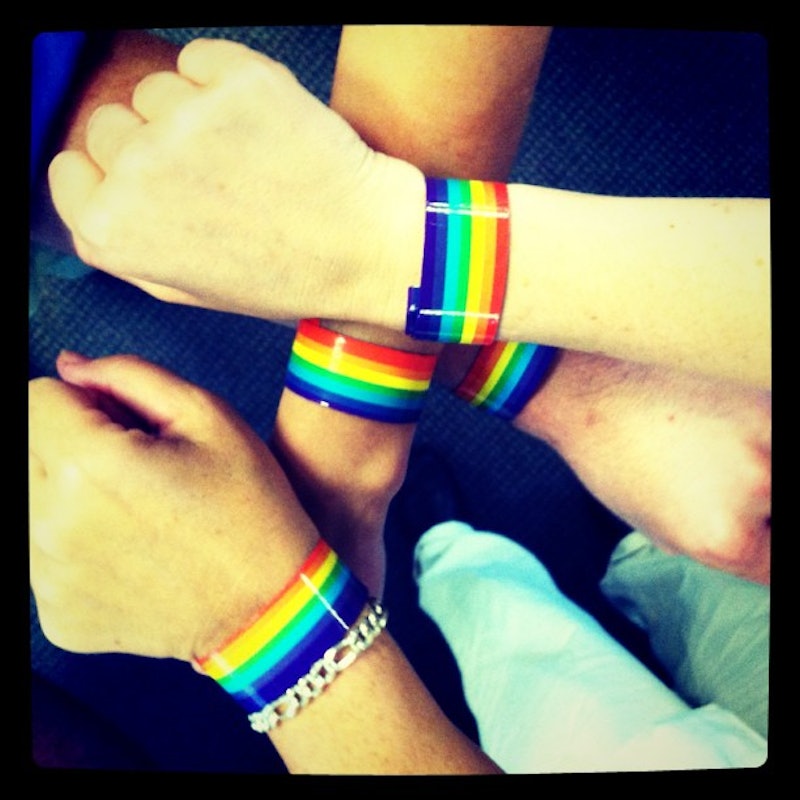 Maybe I'm biased, but the '90s were the best, right? Cartoons and humans co-starred in what can only be described as cinematic magic, food was barely food (Purple ketchup! Blue soda! Lunchables!), and everything was covered in flannel. What a time to be alive! Or at least, I can say that now that I'm 20 years removed from it all. At the time, I experienced a whole lot of '90s kid struggles, and I know I'm not the only one.

Having been born 1991, my childhood straddles both the late '90s and early 2000s — meaning I still consider denim mini skirts and butterfly clips the height of chic. Additionally, most of my baby photos feature flannel and at least one scrunchie, and my favorite outfit growing up was a pair of purple velvet overalls covered in butterfly appliques. I also spent a lot of time with my babysitter's teenage daughter, lying on her floor and looking up at her bedroom that was literally wallpapered with Lance Bass' face.

For me, quintessential '90s culture will always be associated with coolness — the kind of coolness that seems unattainable to an 8 year old. So while, sure, it would be nice to have at least one item from my childhood that is not covered in Lisa Frank stickers, I have an innate fondness for this decade. Don't get me drunk and on the topic of '90s nostalgia; I'll probably start crying.

(Also, don't send me angry messages about the conspicuous lack of video game-related items on this list. I was not allowed to play video games. I was a nerd. Please do not bully me.)

That said, though, all '90s kids can relate to these very real struggles — because dealing with a dead Tamagotchi was traumatizing, no matter how old you were at the time.

1. Getting your slap bracelet confiscated at school.

Because it was literally just scrap metal covered by scrap cloth.

One time, someone's mom came in to show off her collection, too. I feel sad when I think about that day too much.

3. Accidentally breaking off one wing of your butterfly clip.

And repeatedly stabbing your fingers with the wire trying to get it out of your mini-bun.

4. Cursing your limp hair's inability to support more than two scrunchies at a time.

While "SarahIsAnnoyingAndSucks" is seemingly immune to snakebites?! Middle school is so unfair!

6. Tying your older brother's giant flannel shirt around your waist and then tripping over it during recess.

7. Licking your Push Pop into a point and unintentionally stabbing yourself in the mouth with it.

Pardon me while I gargle unintelligibly in pain.

Friendships were ruined. Lives were altered.

What, like LanceBassLuvr was a popular choice or something?????

10. Misjudging the cookies-to-frosting ratio in your Dunkaroos pack.

Leaving you with a whole lot of those sawdust-y graham crackers.

My soul is Crimson Glow, mom! Why don't you get it?!

12. Knowing in your heart of hearts that, were you to be on Legends of the Hidden Temple, you would totally school that giant talking head at trivia.

And you would bang that gong and win that Razor scooter and that trip to Orlando and everything would be right in the world — because you would totally be able to put together that dang Shrine of the Silver Monkey.

Hell in a plastic egg. Also, death. So much death.

14. Sticking to your inflatable plastic chair and slowly sinking to the floor over the course of 30 minutes.

And then the chair making a fart noise when you finally decided to crawl out of it. Curse you, Limited Too furniture.

15. When the drugstore was out of Dr. Pepper-flavored Lip Smackers.

And yours melted when you left it in your plastic purse from dEliA's.

16. Begging your mom to buy you Lunchables for lunch.

It's not plastic food, mom! It's cool! I like that it could probably survive the apocalypse! Let me live!!!

17. Navigating the social minefield of deciding which Spice Girl each of your friends would be when playing Spice Girls.

Let's be real: I was always Ginger Spice because I "liked every single boy," not because I had red hair.

And accidentally recording over the "important family moments" tape or something. The aftermath was not pretty.

19. When your Bath & Body Works Body Splash leaked all over backpack.