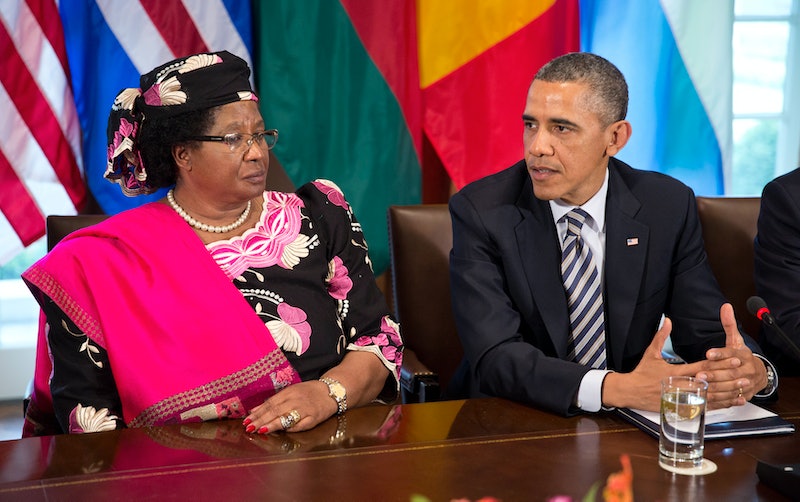 As the President began his first major tour of sub-Saharan Africa Thursday, he reiterated his support of the Supreme Court's ruling on gay marriage, and says he believes that this recognition should cross state lines.

At a news conference in Senegal—the President's first stop in the week-long tour—Obama praised yesterday's Supreme Court's ruling, calling it a "victory for American democracy."

Obama also said he believes that same-sex couples who get married legally in one state should be able to keep their benefits when they move to another state—even when it doesn't recognize gay unions.

“It’s my personal belief—and I’m speaking now as a president [not] as a lawyer—if you’re married in Massachusetts and you move someplace else, you’re still married,” Obama said. The president also reiterated that he thought the Supreme Court's ruling on the Voting Rights Act was "a mistake."Read more: http://www.politico.com/story/2013/06/obama-comments-supreme-court-gay-marriage-rulings-93489.html#ixzz2XQOUsvah

The Senegalese President Macky Sall, who was also at the news conference, responded by saying that in Senegal they are "still not ready to decriminalize homosexuality." But he added that it “does not mean we are homophobic.”

Actually, that's pretty much exactly what it means.

In spite of this, Obama applauded Senegal as one of "the most stable democracies in Africa," saying that it's "moving in the right direction."

He will be continuing his tour of Africa over the next week, visiting South Africa and Tanzania, but will not be going to Kenya or Nigeria. It is unclear at this time whether he will be visiting the ailing Nelson Mandela.