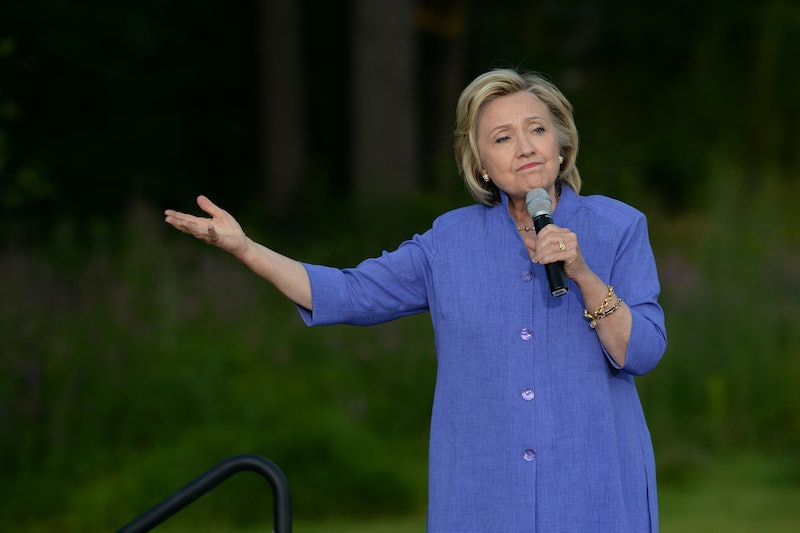 Put on your pre-ordering pants, folks. There's a Hillary Clinton picture book coming out in January: a beautifully illustrated biography of one of the most powerful women in the world. To be honest, it looks glorious.

Hillary is a collaborative effort from author Jonah Winter and illustrator Raul Colón. Winter previously teamed up with AG Ford to bring us Barack: a picture book biography of the 44th POTUS. Colón is the illustrator of several biographies for children, including My Name Is Gabito, Roberto Clemente: Pride of the Pittsburgh Pirates, and Annie and Helen.

More than a dry recitation of facts, however, Hillary appears to be more of an inspirational book for children ages 4-8. It contains brilliant quotes about rebounding after failure, ignoring nasty comments, and changing the world into a place where people of all genders are equal. Even if you don't align 100 percent with Hillary's political positions, I think we can all agree that those are valuable lessons to teach children.

Let's not forget: changing the world is the Clinton women's platform. Daughter Chelsea Clinton's upcoming book, It's Your World , is all about how 10- to 14-year-olds can change the world around them by combating poverty, ecological destruction, and prejudice. To be honest, it would be totally cool if — just like Disney predicted — Chelsea became president. But I digress.

What's been released so far doesn't tell us much about what details the book will cover, but Mashable notes that it's primarily concerned with "how a girl from the suburbs of Chicago worked to became Secretary of State and a presidential candidate." I personally hope we get to see her during her time at Wellesley College and Yale Law School — because, come on, Hillary's fashion is on point — as well as some anecdotes from her childhood, including that time she wrote to NASA asking how to become an astronaut. And, of course, Hillary must tell all about her long political career: from senator, to presidential candidate, to Secretary of State, to — hopefully — the United States' first Madam President.

Unfortunately, Hillary won't be out in time for the holidays, but that doesn't mean you can't make New Year's Day into a gift-giving holiday next year. Don't laugh at me, folks, I'm serious. I don't even have kids to give it to, and I'm tempted to buy a copy for my own bookshelf. The picture book biography hits store shelves and e-readers — YES, THERE IS AN E-BOOK VERSION AVAILABLE — on January 5. Until then, you can get a sneak peek of Hillary to tide you over.