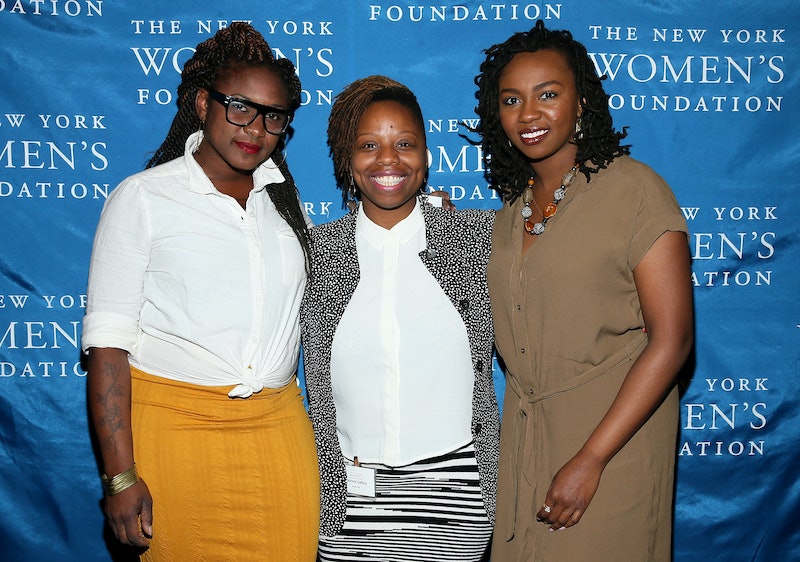 The Black Lives Matter movement is not slowing down. This week, protesters took to the streets in Ferguson and cities across the country in remembrance of Michael Brown's death one year ago, demanding the same respect from law enforcement the movement's been fighting for since its start. There are many fearless women leading Black Lives Matter, both the actual organization and the broader movement, who will stop at nothing to change the way people of color are treated by the police in America.

Activists are already inserting themselves in the 2016 presidential race and have disrupted two of Bernie Sanders' political rallies recently. On Saturday, two women took the microphone away from Sanders at an event for Medicare and social security and called for a moment of silence for Brown. Sanders and Martin O'Malley were also bombarded by Black Lives Matter protesters at a Netroots Nation town hall in July, where the two Democratic candidates were asked about discrimination and police brutality. Black Lives Matter activists want to make sure presidential hopefuls talk about race and that discrimination becomes a key issue in the 2016 election.

Here are eight women making a difference in the Black Lives Matter movement you absolutely need to know about.

Alicia Garza, one of the Black Lives Matter co-founders, created the phrase that started the nationwide movement. Garza formed the online presence for Black Lives Matter with two friends after writing a Facebook post about how black lives matter following the death of Trayvon Martin in 2012. She works as the special projects director for the National Domestic Workers Alliance.

Another co-founder of the organization, Patrisse Cullors, saw Garza's original Facebook post and added a hashtag to the phrase, starting the #BlackLivesMatter social media trend. Cullors describes herself on her website as an "artist, organizer and freedom fighter" in Los Angeles. Since beginning Black Lives Matter, she has been supporting protesters fighting anti-black racism in cities across the country.

Opal Tometi, the third co-founder of Black Lives Matter, is the executive director of the Black Alliance for Just Immigration. Tometi helped build the online platform the the organization, helping activists everywhere connect and strategize.

Netta Elzie was arrested while protesting in Ferguson Monday. Elzie co-edits "This Is The Movement," a protest newsletter, and has been an active protester for the movement after Brown's death last year. She told The Atlantic: "I didn't know I was an activist until someone told me."

Morgan Malone is a Black Lives Matter activist who was involved in the interruption of the Netroots Nation presidential town hall meeting in Phoenix and then participated in a People for Bernie Sanders conference call about racial issues. "Someone has to hold the candidates accountable on race issues," she said during the call.

Tia Oso demanded a microphone at the Netroots Nation conference to bring attention to the black women killed by the police as well as the larger issues of systemic violence and racism. In an op-ed for Mic, she wrote: "Saturday's action was powerful. Black organizers claimed our rightful place at the front of the progressive movement." She also works as an organizer for the Black Alliance for Just Immigration.

Marissa Johnson was one of the two activists who interrupted Sanders' rally in Seattle on Saturday. "I was going to tell Bernie how racist this city is, even with all of these progressives, but you’ve already done that for me. Thank you," she said when she got the microphone.

Ashley Yates became a full-time activist after Brown's death last year and went to Ferguson to protest outside the police department. Since then, she's focused on mobilizing people around racial inequality and the #SayHerName campaign.