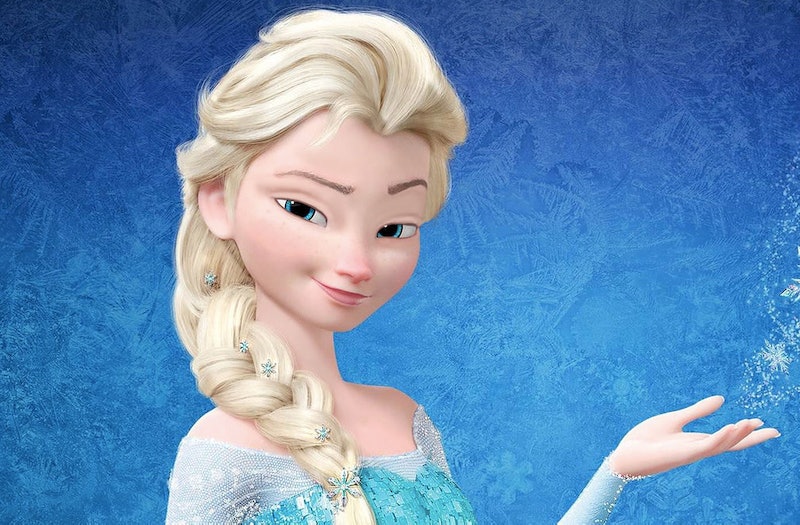 I think the universe wanted this to happen to us on a Wednesday, because this is right around that time of the week that even the most faithful makeup wearers are #done with surrendering an extra push of the snooze button to their makeup routine. No doubt the same thing would happen to our favorite Disney princesses. They've got kingdoms to run, y'all. Ain't nobody got time to perfect a waterproof cat eye when they're leading an entire fictional country/opening their own insanely busy restaurant/keeping an army of men in line. And besides, they rock the au naturel look every bit as flawlessly as they do with their makeup on. The proof is in the pudding:

Can we talk about how the lack of makeup only seems to make her sass game STRONGER? She may have magical ice powers, but she also has magical brow powers, and I am under their spell. I'm also secretly digging that this is a cartoon approximation of what I looked like when I crawled out of bed at 6 a.m. today — you know, minus the glittery blue ballgown and the kind of inheritance that people have murdered their siblings for.

I suspect that Tiana basically never sleeps ever, cuz she's a boss b*tch and she doesn't need to deal with all of our mortal crap, thank you very much. But just like Elsa, her powers of sass only seem to grow stronger sans makeup. These two ladies prove that makeup, although fun to play with and put all over yourself at Sephora during your lunch break (what?), doesn't alter who you are as a human in your core.

For the rest of the Disney princesses without makeup, check out BuzzFeed's "This Is What Disney Princesses Look Like Without Makeup" and follow Loryn Brantz on Twitter.

More like this
The 'Hocus Pocus' Sequel Finally Has A Release Date & It Makes Total Sense
By Shannon Barbour and Radhika Menon
9 Honestly Unbelievable Revelations From The WAGatha Christie Trial
By Frances Stewart
10 Eurovision Moments That Celebrate The Weird & Wonderful Camp Extravaganza
By Sam Ramsden
M.A.C. Is Launching An ’80s-Chic Stranger Things Makeup Collection
By Olivia Rose Ferreiro
Get Even More From Bustle — Sign Up For The Newsletter