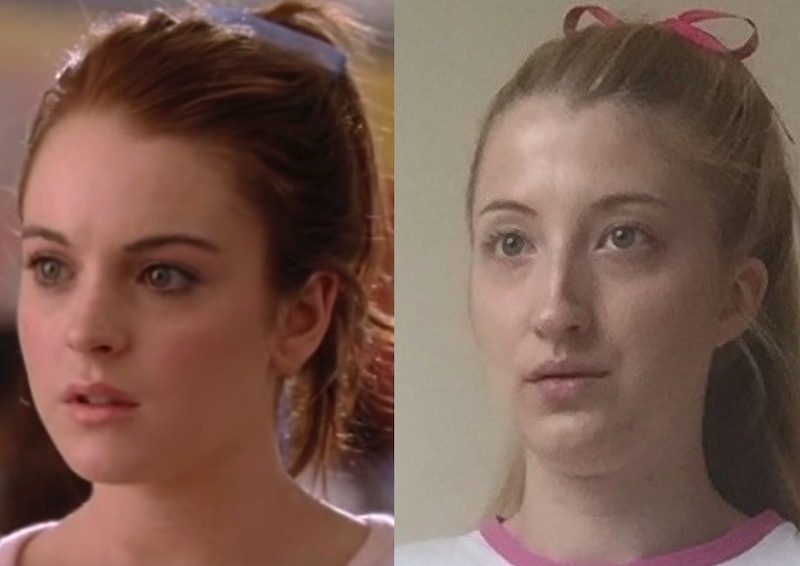 When I first saw Mean Girls in my mid teens, I was amazed at how accurately the movie nailed the experience of being a teenage girl and the cliques that come with it. I was also astounded by all of The Plastics' totally on trend Mean Girls hair. Not to mention Rachel McAdams' portrayal of catty queen bee Regina George and the manipulative powers of her sidekick Gretchen Wieners.

I couldn't imagine being subjected to a bout of back-stabbing bitchiness from an aspiring Regina George during a period of my life when I often felt insecure about myself, and wasn't remotely sure of who I was. Just picture going up against the perfectly polished, primped, and preened Plastics when you had oily skin and zits, you thought being fashionable consisted of dressing like a skater kid, and your hormones hadn't kicked in yet because you couldn't even fit into a AA cup bra.

That being said, I have to hand it to these young women. Waking up for high school is usually hard enough without having to worry about perfecting your 'do. Although these ladies were anything but nice, they did know how to dress and they never had a hair out of place (apart from when Cady was sabotaging Regina, but let's just gloss over that part). So, here's how to get noughties Mean Girls inspired hair so you can look like a Plastic while really being a mathlete on the inside.

This is my everyday hair. It's long, blonde, and bang-less. Luckily, the majority of the ladies in Mean Girls have shoulder-length to long hair so I lucked out. However, a couple of them have bangs so I knew I'd have to get creative with these styles.

Cady once described Regina George as "the Barbie doll [she] never had." I thought I'd wear my Barbie tee to honor the most glamorous gal in the halls. My hair is naturally straight so I didn't have to use irons to achieve this look, but if you're trying this out at home and your hair is curly, you may want to use a straightener to achieve Regina's sleek style. I parted my hair to the side like Regina's and the look was complete.

Verdict: This was super easy look for my hair type. That being said, I think it looks a little more boring on me because I don't have any layers or bangs like Ms. George. I have no idea how she looks so glam with such a simple style. Maybe it's all in the makeup.

Before Cady became a member of The Plastics, her style could arguably be dubbed tomboyish and quite casual. She used to wear her hair in a simple ponytail with a section of locks wrapped around her hair tie for a cool effect. This was an easy style to recreate. I thought it may be a little trickier due to the fact that Cady has bangs, but they are swept back and barely noticeable anyway.

I kept my hair in my natural parting and brushed back the rest into a ponytail. I then grabbed a piece of hair from my ponytail and wrapped it around my tie, securing it with a bobby pin from underneath so it was hidden.

Verdict: I like how the hair wrapped around the hair tie adds an air of sophistication to the look, but I'm not too keen on how downright boring the style appears from the front.

When Cady was welcomed into The Plastics clique, she initially stuck to her tomboyish roots. However, after a while of hanging out with a bunch of super glamorous girls who were obsessed with their own appearances, she decided to change her style. Cady adopted a much more feminine and youthful look, sometimes wearing a pretty ponytail with a ribbon.

To achieve Cady's new style, I tipped my head upside down and brushed my hair into a tight, high ponytail. When I felt confident with my ponytail, I tied a cute ribbon around it to copy Cady.

Verdict: I love having my hair off of my face and out of the way — especially in the summer months — so I really like this style. I also enjoy how the cute ribbon adds a vintage vibe to the look.

Janis and her friend Damian welcome Cady into high school life and initially concoct a plan with her to overthrow The Plastics. Janis is an alternative chick who believes that everyone gets what they deserve. Her hair is most likely inspired by the grunge era, and it's quite all over the place.

To create this haphazard look, I began by sectioning off two pieces of hair around my face. I put the rest of my hair into a ponytail. After this, I used a bobby pin to pin back the hair on the left side of my face so it was out of my eyes like Janis' and then I used further bobby pins to randomly pin up sections taken from my ponytail.

Verdict: This actually turned out better than I thought and it looks quite cool from the front. However, from the back my hair essentially resembled a bird's nest. Hey, maybe that's what Janis was going for.

Gretchen is always trying to coin new slang words and make "fetch" happen. Here she is all ready for The Plastics' annual performance of "Jingle Bell Rock" at the Winter Talent Show. Her hair is worn down and curled and she wears a cute Santa hat to match her outfit.

To achieve this look, I used my heated rollers to curl my hair as I don't think I would have the skill, patience, or time to tame my mane into a wonderful, curled masterpiece. After this, I finger-combed my curls and put on my Santa hat.

Verdict: A super cute look for Christmas, but I don't know what the general public's reaction would be to someone walking around in a Santa hat in the middle of August. I'm definitely going to keep this style in mind for the winter season, though.

Look totally grool as you go back to school or work in Mean Girls-inspired hairstyles.