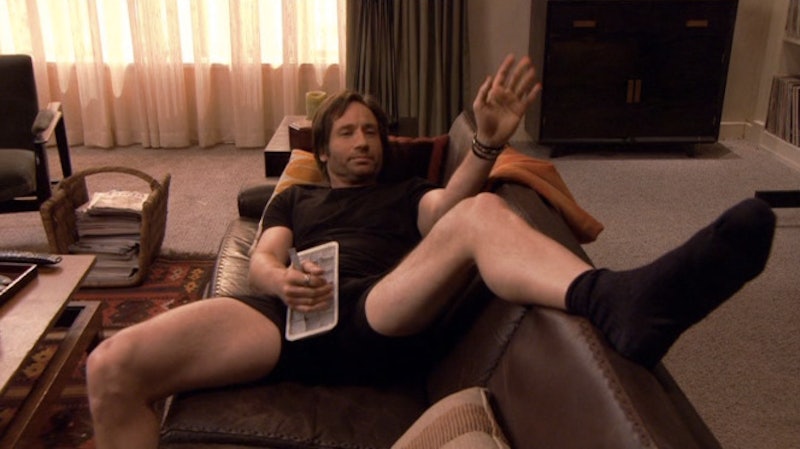 If you're a woman who has sex with men, it's easy to feel like you spend more time dealing with inconvenient contraceptives (or their unpredictable side effects) than you do actually having sex — so the idea of having a male partner with a vasectomy sounds like winning the pants-party lottery. In the public imagination, a vasectomy is a minimally invasive and easily reversible surgery with no side effects, one that is 100 percent effective as birth control — and any man who refuses to get one must just be feeling a little too precious about having a doctor meddle with his testicles. But is any of that true?

It is true that a vasectomy procedure is simpler than female sterilization surgery. It's an outpatient surgery where a doctor blocks the vas deferens — the tubes that carry sperm from the testicles to other glands, where the sperm mixes with other fluids and become semen, the stuff that comes out when a man ejaculates. A man who has had a vasectomy still ejaculates, but because his vas deferens are blocked, his semen no longer contains sperm, and thus he can no longer get a partner pregnant. And vasectomies are indeed very effective — they have a failure rate of less than one percent. But beyond that, a lot of what we think we know about vasectomies is a myth.

It turns out that, like a lot of things within the realm of reproductive health, vasectomies are more complex than we've been led to believe. So if you've spent your whole life jealous of the idea that men get to prevent pregnancy with "just a snip" (or spent years annoyed that your boyfriend or husband won't get one), well, you're allowed to be — but know that there's more to the story that just men being too nervous to let a doctor get near their junk. Read on for five facts you probably didn't know about vasectomies.

1. Vasectomies Are Not Always Reversible

Myth: Reversing a vasectomy is incredibly simple, and always works.

Fact: There is a risk with any vasectomy that it may not be reversible.

Many of us think of vasectomies as reversible long-term birth control, on par with the IUD — we imagine some kind of switch that gets flipped back, and suddenly, sperm are a-flowin' through one's testicles once again.

But in reality, there is a risk that any vasectomy may not be reversible. Reversing a vasectomy involves a surgeon rerouting the vas deferens, restoring the internal passageway for sperm to exit the body (testicles still produce sperm after a man has a vasectomy — they just stay inside the body). The reversal surgery lasts for about two to three hours, and though it often works, reversing a vasectomy is not a sure thing — sometimes a surgeon is unable to successfully restore the connection. Some surgeons believe that a vasectomy performed many years ago is more difficult to reverse than a recent one — according to the Mayo Clinic website, a vasectomy performed within the last three years has a 95 percent chance of being successfully reversed, but if a man has waited more than 15 years to have his vasectomy reversed, his odds of a successful reversal drop to 70. But these odds are still better than, say, tubal ligation, a surgical birth control for women that is very difficult to reverse.

So, much like female sterilization, vasectomies are best reserved for men who have completed their families or are certain that they don't want children; they're a less-great option for, say, unpartnered men who want to settled down with a partner and have children some day, but don't want to deal with the hassle of condoms right now.

2. Vasectomies Are Definitely Not Painless

Myth: You don't feel any pain when getting a vasectomy.

Fact: Many people feel pain during and after their vasectomies.

Vasectomy procedures are often thought to be pain-free — the Mayo Clinic website describes the procedure as feeling like "minor pain and pulling or tugging." But as anyone who has gone through any sort of outpatient surgery (reproductive or otherwise) knows, pain thresholds vary. Some people might indeed feel no pain during a vasectomy, but others have reported very real pain and discomfort. According to Neil Lyndon's first-person account of getting a vasectomy in The Telegraph (UK), the process of getting his genitals anesthetized while preparing to undergo a vasectomy was quite painful; he also experienced post-surgery pain and swelling that kept him in bed for the next several days. The genital area may often painfully bruise and swell in the days after surgery.

3. Getting A Vasectomy Doesn't Make You Impotent

Myth: A man with a vasectomy can't get an erection; vasectomy surgery involves the removal of one or both testicles.

Fact: Men with vasectomies can still get erections and have sex (otherwise, it would kind of defeat the purpose, right?)

Despite the fact that a vasectomy is a form of birth control — and thus implies that the person having the vasectomy is still going to be getting it on regularly — many folks believe that a vasectomy leaves you unable to get an erection, or that it involves castration (i.e. removing the testicles). There is absolutely no truth to either of these statements. Vasectomies don't impact the mechanics of erections in the least, and vasectomies definitely don't work by damaging or removing the testicles — they simply block the passageway your body uses to move sperm from the testicles to the urethral opening. The testicles of a man who has a vasectomy are still creating sperm — the sperm are just not becoming a part of his semen. So rest assured; you'll leave a vasectomy surgery with exactly as many testicles as you came in with.

4. A Vasectomy Might Raise Your Risk Of Developing Aggressive Prostate Cancer

Myth: Vasectomies have no impact on a man's health.

Fact: A recent study has revealed a connection between vasectomies and cancer.

This is a serious bummer — though it might be considered comparable in some ways to studies that have shown a raised risk of cervical cancer for women who take the birth control pill. The risk of cervical cancer drops after a woman stops taking the Pill, however; this study didn't document whether there was a similar drop in risk for men who had their vasectomies reversed.

5. Men Have To Get A Doctor's Approval To Get A Vasectomy

Myth: All men can get a vasectomy any time they want, from any urologist.

Fact: A urologist is allowed to refuse to perform a vasectomy on any man.

The Internet is filled with stories of young women who know that they don't want children, but run into bias from doctors who tell them that they'll "change their minds" and refuse to give them permanent birth control. But I was surprised to find that men who want vasectomies often run into the same wall with doctors who don't believe that they know their own minds and bodies. We think of vasectomies as an elective procedure than men can easily obtain, but the truth is that men need a doctor's permission to undergo the surgery — and many doctors refuse to give that permission to men who are young or unmarried.

Ben Wakeling, writing in The Guardian (UK), described a meeting with a doctor who told him that at 28, he was "a little young" to be getting a vasectomy, and condescendingly asked him if he had looked into other birth control methods — despite the fact that Wakeling and his wife already had three children. And a Reddit thread dedicated to the topic revealed that a number of men had run into similar issues.

So despite what many of us in long-term heterosexual partnerships had hoped, the vasectomy is not a contraceptive magic bullet — it's a method with pluses and drawbacks, just like any other form of birth control. Is that proof that the universe is a cruel and unfeeling place? Possibly. Is that also proof that researchers really seriously need to get cracking on that male birth control pill? Definitely.

More like this
This Company Will Send STI Tests Right To Your Door
By Lexi Inks
Bumble's "Compliments" Feature Lets You Message Before You Match
By Lexi Inks
The 5 Best Pillows For Acid Reflux, According To A Sleep Expert
By Maria Cassano
7 Dos & Don'ts To Follow For The December 2022 Full Moon
By Brittany Beringer
Get Even More From Bustle — Sign Up For The Newsletter