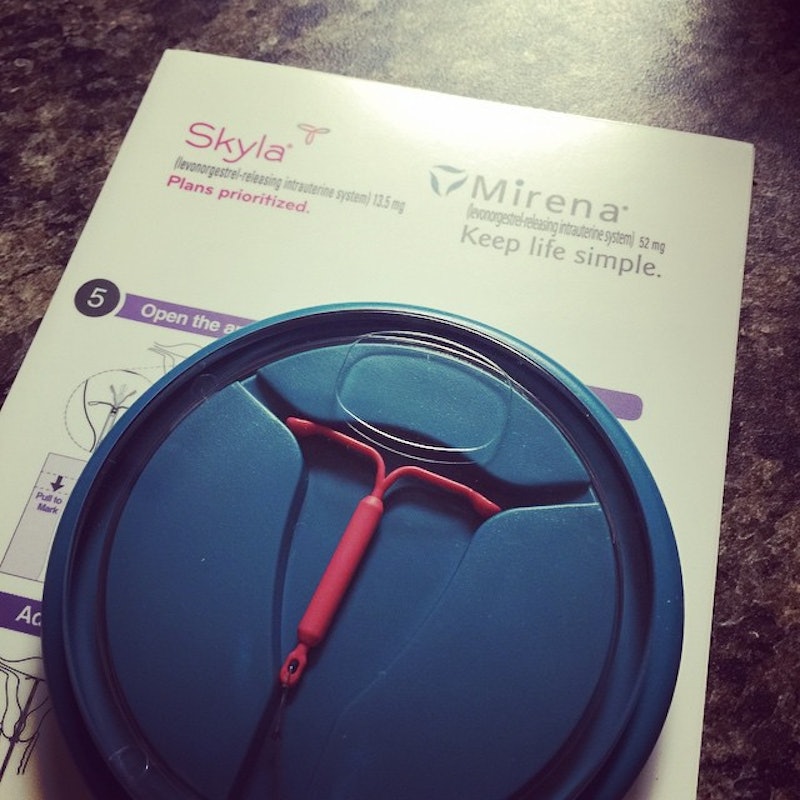 When the Pill was first introduced to the public in 1960, it was a game-changer — not only was it a new, reliable birth control method, it was among the first contraceptives in history that gave women complete control over their sexual and reproductive lives. Prior to the invention of the Pill, women who wanted to have sex with men but didn't want to get pregnant had to depend on their male partners using condoms, or use complicated methods like the diaphragm, which were difficult to obtain. Younger or economically disadvantaged women often had to rely on iffier and more old-fashioned birth control methods. But the invention of the Pill opened the door, and in the decades since, the market has been flooded with effective birth control methods for women.

But while it's great to have so many birth control options, birth control in America is still far from perfect. Many hormonal contraceptives come with side effects, from depression and mood swings to a serious drop in libido. And even when we've found the birth control method that works for us, there are still many roadblocks to accessing it — for example, some insurance programs refuse to cover certain forms of birth control (mine won’t cover the IUD).

To find out more about the state of contraception in 2015, we asked 16 women to talk about their favorite forms of birth control and why they love them — and found out that though a lot has changed for women in the 55 years since the Pill was first introduced, our relationships with our birth control methods can still be complex.

"The Pill, specifically Ortho-Tri-Cyclen Lo. I like that I don't have to worry about any weird devices. Not to mention it comes with a lot of other benefits, like a lighter period, clearer skin, and no cramps!"

"I love my Mirena IUD. I've used several variations of the Pill, I've used the NuvaRing, I've used condoms and spermicide, I've used being repulsive to the opposite sex, and the IUD is by far my favorite. I don't have a period anymore, per say — just the PMS symptoms and no bleeding. It's been in for six months, and I don't even think about it most days."

"I got a hormonal IUD last year. There were six brutal months of nonstop bleeding/spotting and epic cramps (worst I'd ever had), but now I'm protected for five years! I understand myself well enough to know I'm not consistent with daily pills, so I found a safe and secure alternative."

"Before my hysterectomy, I had the Mirena IUD and loved it. Aside from the 'no babies' thing, it turned my period into a comma. I'd get a small twinge that was the tiniest of all tiny cramps, accompanied by an overwhelming craving for Taco Bell. That was it; that was my period. No ruined underwear. Just one gassy night."

"Mirena and NuvaRing were huge disappointments for me — I had mid-cycle spotting, and unpredictable periods. So I went with tubal ligation. No more babies. No more worry over a being a day late ever."

"Having a toddler. Because you're too exhausted to f*ck, but you're happy anyway."

"I love, love, love my NuvaRing. I've experienced zero side effects and I love not having to think about it every day. My one complaint is that sometime it pops out during sex. But I just wash it off and put it back in."

"Mirena is my current favorite! I have used condoms and various types of oral contraceptives, but love the IUD. It was a bitch to get it put in, but I've had it for a couple years now. No problems, don't have to remember to take a pill at the same time every day, no periods (and honestly very few period symptoms.) It's seriously amazing. I literally laugh at people who suggest something I'm feeling might be pregnancy."

"I can't be on any hormonal birth control because I have migraines. The hormones unfortunately raise the risk of blood clots in the brain for people with chronic migraines — which my first OBGYN forgot to tell me until I was two years into the Pill, when she was like 'Oh, sh*t, we should take you off that, oops.' Anyway, I've been using just condoms until recently, when I started having one steady partner. So I got an IUD, the Paragard copper one (again, because I can't with the hormones). It's great, except for the fact that my partner CAN sometimes feel the string during sex, and also the cramping is worse during periods."

"I've been on the monophasic pill for almost 10 years (that's the type with only one kind of hormone, as opposed to the kind that bounces between between a few different hormones over the course of the month). It has worked for me — it's reliable, it cleared up my skin, and most importantly, I no longer get major cramps (I used to get cramps so bad on the first day of my period that I'd have to stay home from school)."

"My favorite form of birth control is the implant. It's what I'm currently using, and I love that it lasts for three years, gets rid of my period, is 99.9% effective, and isn't hard to get or too painful to insert. I would highly recommend it and feel that not enough people know it exists!"

"The Pill! It's easy peasy — you pop one a day and you're covered! I've set an alarm on my phone that plays Coach Carr's 'Don't have sex because you will get pregnant and die!' speech from Mean Girls, so I remember to always take it at the same time."

"I have sworn by the NuvaRing for years. It's foolproof ― just insert at the first of the month, then take out after three weeks. You get your period during the fourth week, then insert a new ring the next week.

Sadly, my current insurance doesn't cover it, so instead of paying $100 a month for it, I take the pill for $0. I'm terrible about remembering to take it and often find myself doubling up to account for missed days. Not a day goes by without me thinking, WHY AREN'T ALL FORMS OF BIRTH CONTROL FREE IN THIS COUNTRY? WHY OH WHY?"

"I'm on my third Mirena IUD, and each one has been so easy and wonderful! Definitely the best method!"

"I might be the last woman in the world who likes condoms, but I’ve yet to find a hormonal method that doesn’t mess me up. My boyfriend and I have also used the pull-out on occasion, but obviously I don’t recommend that.”

"I've been on Loestrin since I was 20. I've never had a problem (aside for my own occasional forgetfulness about taking it, which has forced me to freak out). But considering I've never had a single side effect and it just works with my body, it's my favorite. Although I've never used anything else, so I'm totally biased."

More like this
12 Aphrodisiac Desserts To Spice Up Your Valentine’s Day
By Kaitlyn Wylde
My Partner Wants Me To Wear A Diaper During Sex. Help!
By Sophia Benoit
TikTok's Voluntary Celibacy Trend Has Sparked A Movement
By Lexi Inks
25 Inspiring Quotes From Black Women To Celebrate Black History Month
By Kyli Rodriguez-Cayro and JR Thorpe
Get Even More From Bustle — Sign Up For The Newsletter
From hair trends to relationship advice, our daily newsletter has everything you need to sound like a person who’s on TikTok, even if you aren’t.