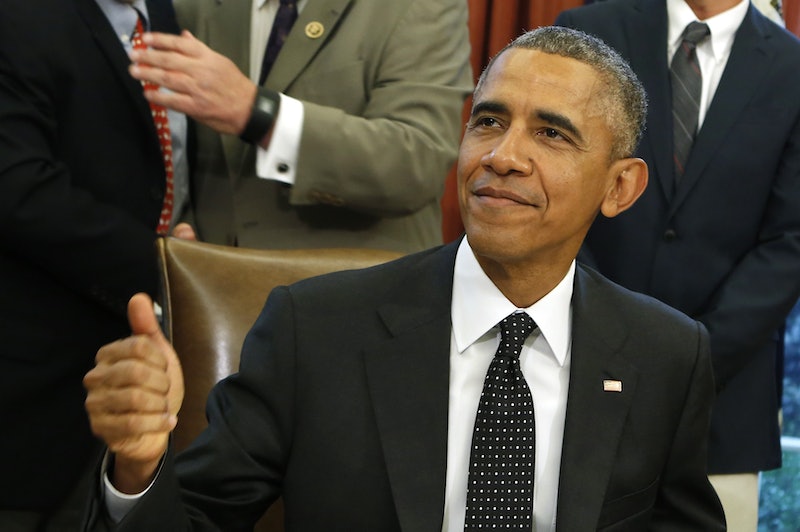 If you didn't already feel summer vacation envy taking one look at the Obama family's Martha's Vineyard vacation home (drool), you're going to now try to stow away in the president's suitcase so you can read along with him, poolside. To put it simply: President Obama's summer reading list for 2015 is bananas amazing.

President Obama has previously listed the likes of Toni Morrison, William Shakespeare, Herman Melville, Marilynne Robinson, and Ralph Waldo Emerson has being some of his favorite books. And he takes this diversity — both in terms of voice and perspective and in terms of type of story — to his 2015 summer reading list. There's fiction and nonfiction, men and (thankfully) women, different races, different ages, and so many different points of view. What they all have in common is that they're all seriously acclaimed books, for all different reasons, and that they've all been published within the last five years. Clearly he's taking this summer reading as a chance to play catch up in the literary world.

Luckily, though we can't stay in his vacation home (without threat of jail time), we can emulate his list and read these six books ourselves. Bottom line: I'm not sure Obama is going to have any time on the golf course if he's going to be reading these books on Martha's Vineyard — and, you know, running the country. But the list does give us a little more insight into the bookish mind of our president.

All That Is by James Salter

Not to call out our president or anything, but All That Is has been sitting on his bookshelf since December 2013, when he bought it at Politics & Prose with his daughter Malia. (We're always watching, too, government.) Obama has always been a fan of literary fiction, and it's hard to go wrong with a PEN/Faulkner winner if you want to ensure you're up on what's hot. And it wouldn't be the first time, either. He gave a shout out to Joseph O'Neill's winner Neverland back in 2009, calling it an "escape from the constant onslaught of briefing books." Plus, Salter's background as a pilot in the U.S. Air Force makes the book a very presidential choice.

On the other hand, I like to imagine Salter's sexually explicit 1967 novel A Sport and a Pastime is one of Obama's secret favorites and he's just catching up on what Salter's up to now.

All The Light We Cannot See by Anthony Doerr

Gosh, Obama. Finally. President Obama might be the last person in the country to read Anthony Doerr's Pulitzer Prize-winning All The Light We Cannot See. Every critic that has put their hands on it has given the World War II-era novel an award nod. He's like the guy in your office who last week was all, "Hey, have you listened to this podcast Serial ?"

The Sixth Extinction: An Unnatural History by Elizabeth Kolbert

Just when you're thinking, "I guess he's only choosing male-authored fiction that starts with the word 'All,'" Obama comes in with an inspired nonfiction choice. Elizabeth Kolbert's 2014 book The Sixth Extinction won the Pulizter Prize for General Nonfiction this year, but Obama taking in interest in the book is a whole different ballgame, because as president now and as a leader for life, he has the potential to effect change on Kolbert's points. The book equates us humans with the asteroid that killed the dinosaurs — our actions are going to cause our own extinction. Just your standard, uplifting beach read.

Again, no shade, but Obama picked up The Lowland back when he picked up Salter's book at Politics & Prose, so it's about time he read Jhumpa Lahiri's Pulitzer Prize-winning masterpiece. Lahiri herself told The New York Times why she believes Obama wanted to read her novel about brothers growing up in both India and the U.S.:

He has a sort of double vision of America as I do, as many people who have been brought up and bred within America but also have a different perspective of the country. In a sense, part of him comes from outside America and he embodies both that contradiction and that richness.

That's some intelligent reasoning. My idea was that Michelle Obama was smart enough to read The Lowland back when it came out in 2013 and she bothers her husband every day about it. He's all, let's talk about this new bill I'm signing, and Michelle's all, "Gosh, have you even read The Lowland yet? Stop right there, it's amazing."

Between The World And Me by Ta-Nehisi Coates

As if we need more proof that President Obama watches The Daily Show , he's picked up recent Jon Stewart guest Ta-Naisi Coates' stunning Between the World and Me. Seriously though, major applause for Obama reading this profound, thought-provoking discussion about America's racial issues, both historically and presently, told in a letter written from father to son. This is Obama's only selection published in 2015, and it could not be a more fitting one for the time.

Washington: A Life by Ron Chernow

President Obama seeks inspiration from our first president, George Washington. It's a little on the nose, don't you think? Maybe he's seeing if Ron Chernow is up to the task of Obama's own presidential biography. He would look great on a horse for the cover.