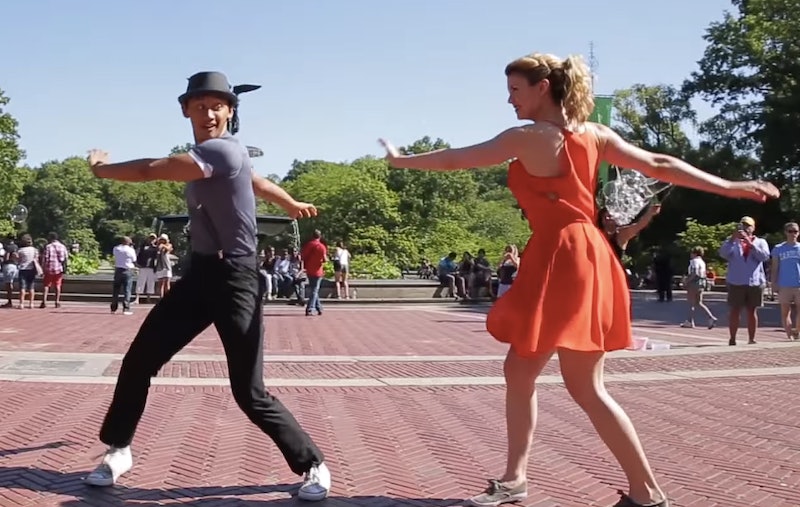 If you're as tired as the rest of the internet is on viral proposal videos, then this one is about to be a caffeine shot of feels injected straight into your heart. A couple got engaged dancing in Central Park, and yes, that sentence is cute enough to kill you dead, but that's not even the best part. Ridonk talented musical theater performers Amanda Phillips and Joshua Dela Cruz have been dating since their school days at Montclair State University, and last week the two of them filmed a stunning dance number to Frank Sinatra's "You Make Me Feel So Young" in Central Park. Except there was one adorable, tear-jerking plot twist — right in the middle of the most flawlessly executed spin, Dela Cruz got down on one knee to propose.

"It took about a month and a half to coordinate this with my cast mates Donald Jones Jr. and Angelo Soriano, our choreographer and videographer respectively," Dela Cruz, who currently works as a cast member in Broadway's Aladdin, shared with Bustle. "I wanted it to be 100 percent real world scenario so that she wouldn't suspect anything. So we had about three rehearsals, spacing in the park, and even a rain date."

It was only fitting that they cut off this dance number in the name of love, because a few years ago they partnered for a dance reel project in a similar fashion. Alas, it never got finished — they started dating instead.

This is far from the first project that the two of them coordinated on. The two of them were friends for a few years before they started seriously dating, and over the years they worked together in school theater, summer stock, and all sorts of side projects.

"My favorite memory was during our first summer stock job was in New Hampshire," said Dela Cruz. "We were working on a production of Cabaret. At the time our program coordinator at MSU, Clay James, knew we were single and paired us up as 'the kissing couple' during one of the numbers. It was a duet where we did an entire dance number with our lips locked together. I will forever thank Clay for that."

"We also are just kind of always working together especially with audition preparation and filming submissions," said Phillips. "I feel pretty lucky that we can do that together and not be upset or hurt when one of us disagrees with an acting choice, etc. It took us a while to get there ... But thank God for him in so many, many ways including this one."

SORRY NOT SORRY that I'm low key emotionally crippling everyone with these gifs right now. They are fifty shades of flawless and I've already watched this video about 18 times, it's casual. Amanda just got back from slaying on the National Tour of "White Christmas," but this video is basically the new version of belated Christmas in July.

"I don't think there was ever one moment that told me this is the one I want to be with for the rest of my life," said Dela Cruz. "It's always a string of small moments that are insignificant at first glance but huge in our relationship's foundation."

The couple is planning to save up to get married in two years, and hopefully will be spending most of that time making more adorable Central Park videos.

WOOPS, now you're dead from emotions. If you managed to survive that, though, you NEED to watch the full video. They are too precious for your eyes. GO GO GO:

More like this
Emily Ratajkowski & Pete Davidson's Astrological Compatibility, Revealed
By Nina Kahn
What Does “The Rizz” Mean On TikTok? The Viral Slang Term, Explained
By Alexis Morillo
The 10 Memes That Defined 2022
By Alexis Morillo
This AI Filter Shows How You’d Look In Different Time Periods
By Alexis Morillo
Get Even More From Bustle — Sign Up For The Newsletter