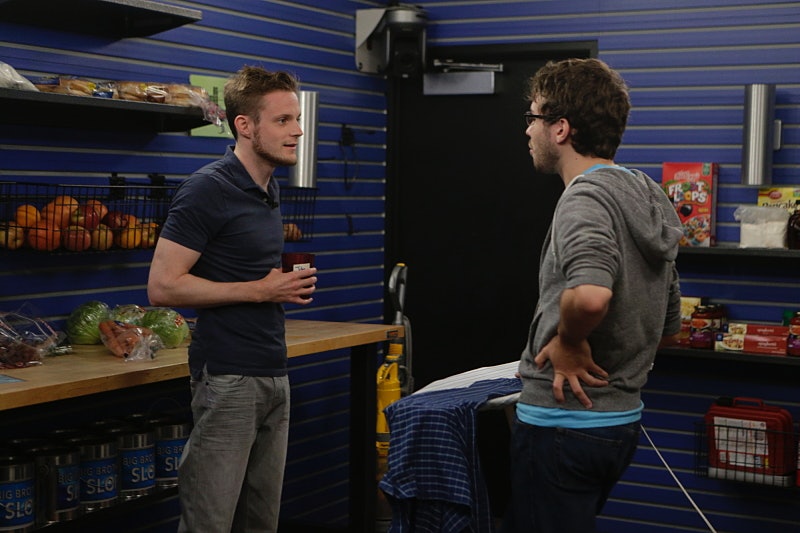 Johnny Mac is in trouble on Big Brother. He's not in any major alliance, is disliked by the largest alliance in the house, his two closest allies hate each other (one of them is working with his biggest target), and he raised a lot of eyebrows during the double eviction when he didn't use the Power of Veto to save Meg or Jackie. So who is John working with on Big Brother 17 ? His gameplay is picking up, but if this fan-favorite wants to make it farther, he has to step up his strategy and rely more on his fellow houseguests instead of just playing his own game.

John is a smart player. He's a secret superfan, and has been flying under the radar for weeks before very recently getting his hands dirty. He has won three Power of Vetos (the most of anyone this season so far) and has been able to stay in the house during the one instance where he was on the block during eviction night. John's luck seems to be running out, however, as Liz (the current HoH) is planning on getting him evicted this coming week. Of the few people that John is able to call his allies, who can he trust the most, and who should he think about distancing himself from? For more on his gameplay, check out Bustle's BB17 podcast below.

Here's who Johnny Mac should consider working with if he wants to stay safe in the Big Brother house.

John and Becky have been partners for a long time, and they work better together than with anyone else in the house. During Becky's HoH, John was able to feel safe for the first time all summer, as there was no way he would be getting sent home. His decision to not use the POV during the double eviction was speculated by many to be caused by uncertainty over whether or not Becky would be put up as a replacement nominee by Steve (who has a strong dislike of Becky). Becky is also a good partner because a lot of the jury will end up disliking her (especially former Sixth Sense members), and so in a final two situation, Johnny is likely to get votes from anyone who doesn't want Becky to win. Now if only they would start having mutual feelings for each other, and let the Johnny Beck showmance we've been waiting for happen, then everything would be perfect for these two.

John and Steve have been outsiders in the house from the beginning. Their partnership in the game started as a genuine friendship as the two bonded over their shared sense of humor and love of Big Brother. Their biggest move together yet happened during the double eviction, where Steve asked John to not use the Power of Veto so that Steve could get his target, Jackie, out of the house. However, Steve's other biggest ally is Vanessa, who has been happy to manipulate and use Steve for her own personal game, and may be able to get Steve to turn on John. If John wants to work a friend that he can trust, he needs to find someone other than Steve.

John hasn't worked with these Goblins yet, but they have a common objective: Evict Vanessa. It seemed that John would have ruined any chance of getting Meg or James' trust after not using the Veto to save Meg or Jackie. Luckily for John, neither of them blame him for his decision. With so little time to plan during the double eviction, there was no way to know who Steve would have put up, and it could've easily been James. If John is smart, he and Becky will join forces with Meg and James to take on Vanessa, Austin, and the twins.

These star-crossed houseguests may never get to truly work together, for they are on opposing sides of the house. John and Julia have gotten along really well, especially since Julia entered the house full-time. Their friendship has yet to yield any strategy or game talk, but hopefully it will force Julia to talk some sense into her sister, and not put Johnny Mac up on the block when he has done nothing to wrong them.

Johnny Mac is a great Big Brother player. He's smart, makes well-thought-out game moves, excels in challenges, and has an easily lovable personality. If he can band all the outsiders together and take down the remnants of the Sixth Sense, he may be able to carry that goodwill all the way to the final two.