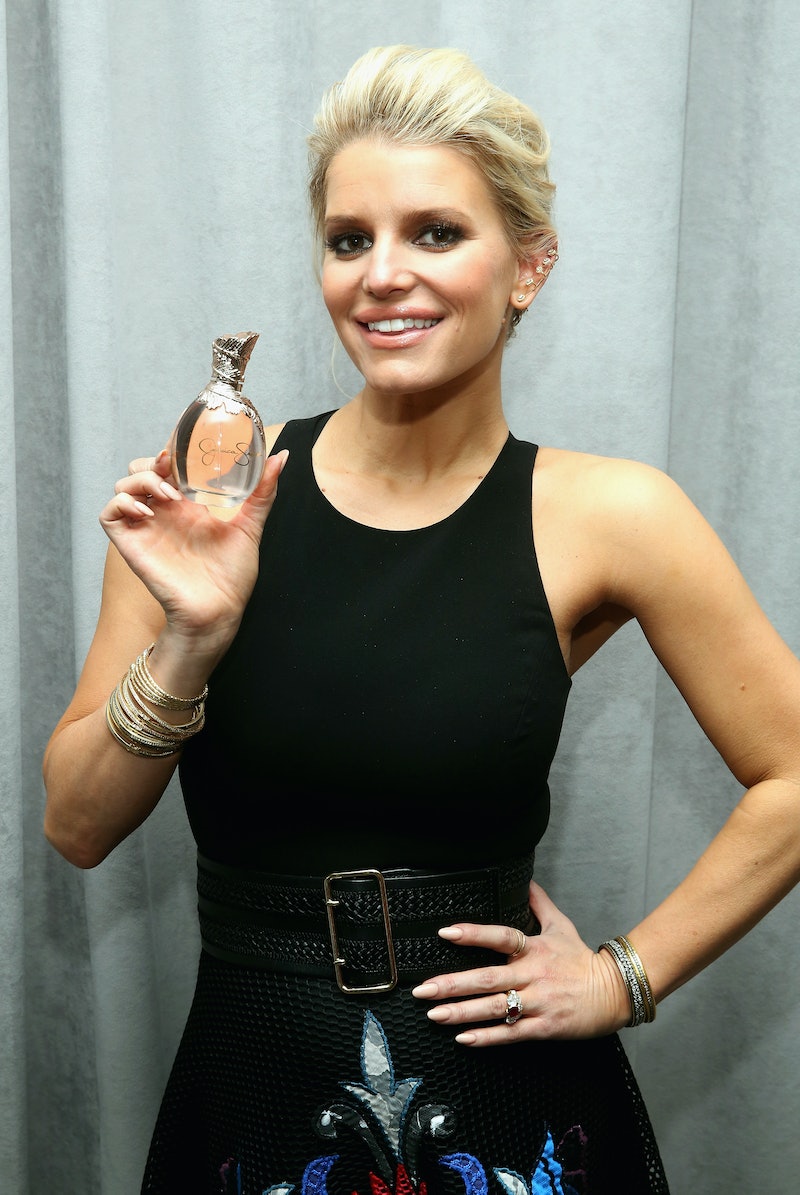 Even if you're old enough to recall the time when Jessica Simpson and ex-husband Nick Lachey starred in their own reality TV show called Newlyweds: Nick and Jessica (which aired from 2003 until 2005), you may not remember a single memorable thing they did together (because there wasn't a single memorable thing they did together). But you will remember Lachey's perpetually exasperated expressions, as if he suddenly realized he had married a super hot houseplant, and the fateful day Simpson asked whether Chicken of the Sea was chicken or tuna fish.

It's was as if no one ever informed Simpson that the cards were already stacked against her — as a beautiful blonde with a generous cup size, people, sadly, automatically assumed that she wasn't intelligent. Unfortunately, the reality show, coupled with her bubbly personality, funny remarks, and the fact that she never seems to age or lose her looks, hasn't convinced anyone otherwise over the years.

But the 35-year-old singer, actress, and fashion designer is much smarter than everyone thinks. You can't last decades in a brutal profession if there isn't more to you than just a pretty face. Her choices over the years, and some of her amazing quotes, prove the celeb isn't much more than just another leggy, tuna fish-eating superstar.

1. She Runs A Successful Fashion Line

Unlike other celebs who have tried and failed to make it in fashion, which is easily one of the most cutthroat industries, Simpson's line of casual women's clothing, shoes, maternity fashion, home goods, fragrances, and clothing for children is a hit because she sticks to her signature romantic Boho style and knows her consumer like the back of her hand. Rather than aim for high fashion, she wisely keeps her brand affordable and attainable, which has helped her reach many customers and gain a huge fan following.

2. She Teamed Up With Shoe Legend Vince Camuto

One of the most intelligent business decisions Simpson made was collaborating with Vince Camuto in 2005 to transform her then-nascent clothing and shoe line into a $1 billion company. Camuto, who passed away in January, became a mentor for Simpson, who described their relationship to WWD: "Vince is an inspiration in so many ways. He’s a savvy businessman, he’s a family man and we share a passion about design and great products. We work with every single item in our line four or five times before it hits shelves. That attention to detail is so important, especially as the line continues to grow.”

3. She Creates Fashion With A Purpose

Simpson created this t-shirt for Baby Buggy, a non-profit founded by Jessica Seinfeld that helps donate children's items to families in need. And she's no stranger to philanthropy. Simpson is an ambassador for Soles4Souls, an organization in which she has participated in autographing shoes and donating the money to various communities in need.

The relationship between Simpson and former hairdresser Ken Paves may not be as tight as it once was, but back in 2006, Paves and Simpson were both smart enough to know that if they teamed up and collaborated on a line of haircare and beauty products for the Home Shopping Network — with his know-how and her gorgeous hair and connections — they could take it far. And they did. Similarly, when Simpson found herself dealing with back-to-back pregnancies, she stayed calm and launched Vintage Bloom, a perfume inspired by motherhood. The real question is: Is there ever a moment she doesn't have on her thinking cap?

5. She Profits From Her Own Silliness

Simpson knew her Chicken of the Sea mistake wouldn't soon be forgotten, so instead of pretending it never happened, she embraced her ditzy image and capitalized on it big-time. Her fun personality led to commercials for companies like Pizza Hut, DirecTV, and Ice Breakers, which cast her and little sister Ashlee Simpson in the adorable 2010 commercial above.

6. She's Not Afraid To Get Political

Jessica Simpson? Political? She may seem like the last person you'd associate with Washington, D.C., but Simpson actually endorsed fellow Texan George W. Bush when he ran for president in 2004 and was well on her way to becoming known as the "GOP It-Girl," according to The Swift Report. Despite pushing for him to win, she refused to become associated with everything Bush stands for (she was mainly concerned with his immigration and border security policies, according to reports) and, at the last minute, backed out from attending his fundraiser. Proving she is more capable of reaching across party lines than most Congressmen, Simpson praised Michelle Obama before the White House Correspondents Dinner in 2010, telling People she wants to be just like her. "I really do," she said. "She's such an incredible woman, and she's with such a powerful man. Everything she does she exudes confidence. I'm really just here to celebrate her."

7. She Waited Until The Perfect Moment To Start Singing Again

In March, Simpson reportedly decided to turn down a huge book deal about her business success to record her seventh studio album. Her last musical effort was back in 2008 with the country album Do You Know, which wasn't received well by country fans, many of whom said she wasn't "country" enough and even booed her when she took stage in Wisconsin, reports MTV. Prior to that, her pop album A Public Affair, which she released right after her divorce from Lachey, sold over 1 million copies. It's pretty obvious that she should be making more pop music and that, given her wicked soprano vocal range (which spans four octaves) she certainly has the pipes to remind the world of what they're missing. Add to this the wise call she made to step away from music for a few years in order to accumulate valuable life experiences and it seems a given that 2016 (or 2017) will (once again) be Simpson's year.

And there you have it: Simpson is beautiful, talented, clued-in, and intelligent enough to own a company worth $1 billion. Her chicken or fish days are clearly behind her.