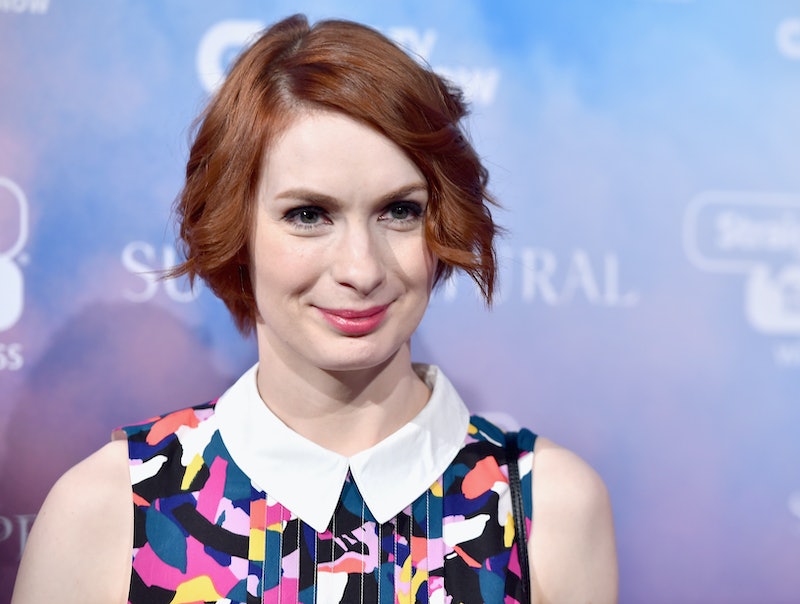 “This isn’t a typical lady memoir,” writes Felicia Day in her new memoir You’re Never Weird on the Internet (Almost) . And she’s right: these 10 Felicia Day quotes totally underscore that. There are no dating stories (well, there was that one time she had a horrible first kiss with an online gaming buddy that her mom, of all people, instigated). There are no makeup tips or stories about one-night stands. It’s a book about a home schooled girl finding a community via video games, and growing up to be the creator of the crazy successful web series The Guild. The series gave a voice to female gamers, but Day's path to Comic-Con panels and fame wasn’t always so smooth.

Day wasn’t home schooled for a few years and then sent to public high school so she could be “socialized.” She was home schooled the whole time. So she was alone a lot, home with her brother, playing video games and writing hilarious journal entries (some of which are in the book, in all their glory). As a kid, the sound of a dial-up modem “was the sound of freedom,” she writes. She found an online community way before Twitter was a thing.

She was a violin prodigy, which earned her a scholarship to the University of Texas early, at an age when most teenagers are still dreaming about the senior prom. The Xena-esque flier she made for a college recital is inspired: In the book, there’s a photo of her in warrior woman garb, holding a flaming violin with the caption “Felicia Warrior Violinist.” Obviously a prelude to future greatness.

In the book, Day talks about her addition to World of Warcraft, which ultimately led to her writing the first draft of The Guild, which was about the lives of a group of online gamers hooked on a World of Warcraft-type game. She writes about online trolls, GamerGate, the ups and downs (so many downs) of the creative process, her struggle with anxiety and depression once the success of her company Geek & Sundry took off, and the good, the bad, and the ugly about the Internet.

It’s a hilarious, relatable book, whether you’re a gamer or not. It actually might make you want to play World of Warcraft—just try not to get addicted. The outcome is NOT pretty.

So here are 10 quotes from the book about passion, fan fiction, determination, and letting your geek flag fly.

On Embracing Who You Are

“The heart of my story is that the world opened up for me once I decided to embrace who I am — unapologetically.”

“My weirdness turned into my greatest strength in life.”

“Don’t chase perfection for perfection’s sake, or for any one else’s sake at all. If you strive for something, make sure it’s for the right reasons. And if you fail, that will be a better lesson to you than any success you’ll ever have. Because you learn a lot from screwing up.”

“If you want to start a new career, it’s better to get some references on your instructors and not pick them out of the back of the classifieds section.”

“You can’t understand something unless you FEEL it. Deep in your bones.”

On Finding Your People

“You’re never weird when you’re surrounded by people who are weird like you.”

“I don’t let people get away with putting themselves down anymore. There are enough negative forces in this world—don’t let the pessimistic voice that lives inside you get away with that stuff, too. That voice is NOT a good roommate.”

“A lot of people mock fandom and fan-fiction, like it’s lazy to base your own creativity and passion on someone else’s work. But some of us need a stepping-stone to start.”

“I love it when people tell me I’m doing the wrong thing, or that something isn’t possible, or just straight dismiss me. That lights my fire in a perverse way, like a two-year old who deliberately touches the hot stove after you tell them not to."

On Breaking Down Barriers

“I love the idea of breaking the system. And the beauty of the Internet is that it gives everyone, especially underrepresented voices, the opportunity to do a little breaking."

The stories and anecdotes in You’re Never Weird on the Internet make it well worth the read. If you like these snippets, there’s plenty more where those came from.