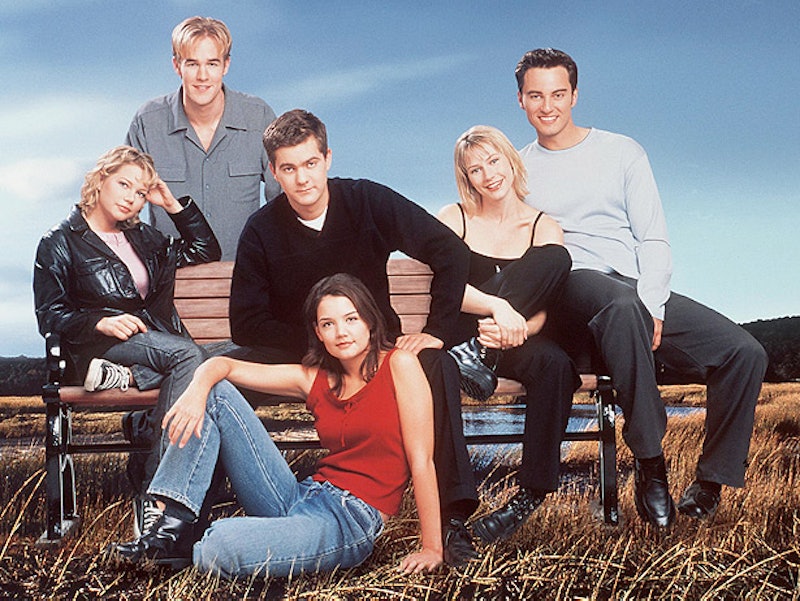 There's been a lot of talk of movie reunions for beloved TV series in the past couple of years, and for much of that we can blame Veronica Mars. When the creator and star of the series put together a Kickstarter to fund the movie conclusion they'd been hoping for since the series' untimely cancellation, fans flocked to donate their hard-earned cash and willed the film into being. Now, every beloved show from Friday Night Lights to Dawson's Creek to Friends and Freaks and Geeks has seen fans scramble to give it a big screen iteration, but here's the thing: that's completely bonkers.

In the case of Veronica Mars, it makes some sense. The series' fate came down to the wire when its third season aired on the CW and rather than compromise the story to accommodate a possible cancellation, Rob Thomas and his writers wrote the season as if there'd be another to follow it. As such, we were left dangling on a precipice for all eternity. When the option came to tie up all those loose ends with a bow, of course we had to jump at it. Veronica Mars was a series built on the dropping of clues leading to a grand conclusion and thanks to the accidental series finale, all we had were a handful of gap-riddled clues and no possible hope of solving the puzzle.

For most of the other series we've become obsessed with rebooting, however, there is no such need. Many folks see this as a tragedy, but others are able to see the flaws in all the reunion hope. After all, the most recent reunion movie loss is Friday Night Lights (an adaptation of a movie, as it is) which already delivered a solid and satisfying ending. What else could a film possibly give us that two unnecessary and extra servings of pecan pie give us on Thanksgiving? Why ruin the satisfied feeling of the succulent TV meal that is the entirety of FNL by pouring on empty, sick-making calories?

The same goes for Friends and Dawson's Creek, who've enjoyed fans' cries for more in the past few years. Friends sewed up so many loose ends it was practically obnoxious. Everyone winds up married or coupled (except Joey, who had to stay single so he could move to L.A. and pretend to be Vince from Entourage) with perfectly-tailored happily ever afters. Yet somehow, fans were giddy to believe a movie poster hoax that made its way around on Facebook and Twitter earlier this year.

The same goes for Dawson's Creek, whose finale even flashed forward in order to give us a complete rundown of our beloved Capeside kids' futures. Joey and Pacey are cozy in their New York apartment; Dawson is married to his childhood vision of Joey (in that he gets to relive everything on his TV show that is basically Dawson's Creek-light); Jack gets together with Pacey's brother so they can raise Jen's baby now that she's gone. There's almost nothing new that could happen to these people without tarnishing the characters as we knew and loved them, yet fans still have hope for a reunion. Who's going to show up? Ghost Jen?

It's a shame to think that we haven't learned from the transgressions of both the first and second Sex and the City movies. After all, the reason the second Sex and the City movie had to send Carrie all the way to Abu Dhabi to kiss Aidan was because the writers (and the audience) would have been bored with more Carrie Takes Manhattan: Rehashed Memories Part II. Been there, done that. Instead, we got a film that had us more focused on Samantha's deplorable "Lawrence of my labia" line than anything happening to the woman at the center of the whole thing. Plus, we enjoyed the added bonus of feeling as if someone had secretly drugged the theater in which the movie was playing. How could anyone see this and decide they'd like their favorite series to suffer an even slightly similar fate?

No one really needs a movie about the characters they once loved now that those characters are in their settled, grown up lives. That's part of the beauty of television: it can capture a life stage in a bubble and when a series ends, that bubble is sealed. We can visit those characters when we like (thank you, Netflix and series DVD sets) and it will always take us back to that moment in time without bringing in the nasty, illusion shattering hand of time. Do we really want to know if Pacey and Joey had a rough patch in their marriage? Of course not. It would ruin the illusion we love so dearly.

Even Freaks and Geeks — a show cancelled in its prime — would be better off in its pristine little casing. The series ended with Lindsay Weir running out on summer school to tour with the Grateful Dead, leaving us to wonder what became of her after she'd shattered her family's trust and disposed of her former self. While I would have loved for Paul Feig and Judd Apatow to continue their fantastic televisual journey, NBC didn't allow it. Luckily, the writing was strong enough that those episodes can stand on their own and that is an incredible feat worth mountains of praise. Making a Freaks and Geeks film now, after so much time has passed would mar that impeccable legacy. (Plus, it might not feel right now that Don Draper has defiled Lindsay Weir on Mad Men.)

Thankfully, like Peter Berg and Taylor Kitch, who've shot down rumors of an FNL movie, Feig has also said he knows the effort would be somewhat futile:

I find it scary. I mean it could be great, but if it’s anything less than great, then it just waters down the memory of the rest of the show. For some reason that becomes the last thing you’ve done, and I always feel like if you don’t get it right it erases the memory of what came before it.

And that's exactly the problem with pushing for reunion films. Fans get so worked up about them that by the time they're released, the film is a helpless swimmer in the center of a whirlpool of sharks. There's no way anyone is going to get a satisfying bite. That's how a series like Sex and the City that was actually rather great when it began has become synonymous with "train wreck" That's why as exciting as it is to get a conclusion for Veronica Mars, it's terrifying knowing that there's a good chance it won't live up to expectations and mar the entire series' memory.

Even when a series actually needs a film to reach its true conclusion, the fear that it will ruin everything is formidable. Why invoke that kind of pressure on a series that ended so resolutely and with at least some semblance of satisfaction? Stop hoping for a reunion and simply allow yourself to enjoy the thing you love with all your heart. Let it be something special that happened once and know that when the right new series comes along, it just might happen again.