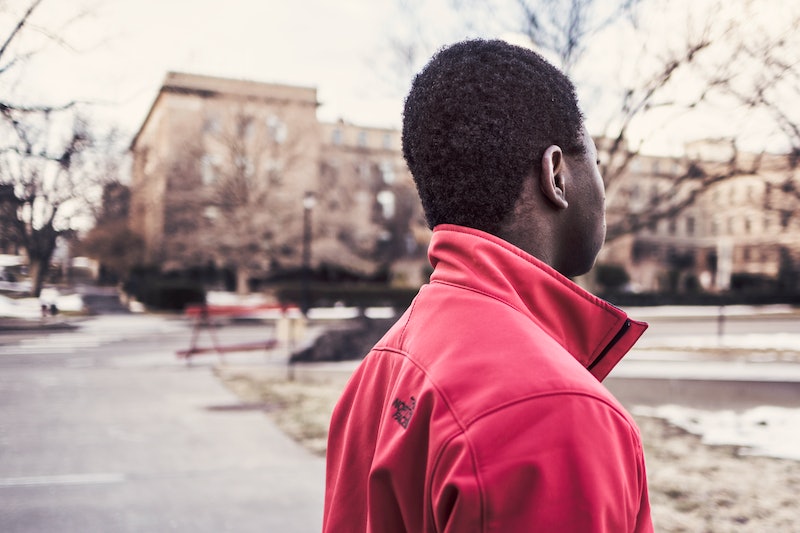 I can still remember being in second grade when my teacher sat us down and gave us a talk about how not to judge other people based on the color of their skin, hair, or eyes. Instead, she told us, judge others based on how they treat you and the people around them. A lot of schools still use this so-called "color blind approach" when talking to students about race, which basically promotes the ideology that skin color should be ignored. But what happens when you teach minority kids "color blindness?" While it might be a great approach in theory, a new study published in the Social Psychology and Personality Science suggests that the reality is a bit more complicated than that, because it tries to avoid one truly unavoidable fact: Children of color are disproportionately and inevitably judged by the color of their skin in the real world — and pretending that doesn't exist isn't doing them any good.

In order to analyze the effect this approach has on minority children, researchers Kristin Pauker of the University of Hawaii at Manoa, Evan P. Apfelbaum of MIT, and Brian Spitzer of NYU recruited a group of 111 students between 9 and 12 years old from public schools in San Francisco. The kids were each asked to play a game in which they were shown photos of 40 people of differing appearances, and told to pick the "correct" person by answering as few questions. For example, if the question was "Does this person have brown hair?" and the participant answered "Yes," it would eliminate all of the people with black or blonde hair, leaving only the "correct" person (kind of like the game Guess Who). Researchers then asked students two final questions — questions which were telling, as well: Whether or not they noticed that white and black people were displayed in the photos, and why they did or did not use race as a question to find the right answer.

Unsurprisingly, the researchers shared that all 111 participants noticed the racial differences between photo subjects, though only 30 percent of them said they used race as a question or determining factor. Though there weren't striking racial differences in the answers, 58 percent of students who didn't use race as a question said it was because they felt doing so would be "inappropriate, rude, [or] offensive." Meanwhile, 23 percent said mentioning race would be racist or prejudice, proving that students felt that even pointing out racial distinction was problematic and offensive. In the end, the research suggested that minority kids may not in fact benefit from color blindness after all, because race is so central to their identities, well-being, and how they're perceived.

Of course, race is as much of a social construct as gender, class, and beauty are — meaning it's not necessarily fair to classify someone else as the race or ethnicity you perceive them to be. However, it is important that students don't ignore these differences altogether, not just for the sake of preserving a variety of cultures, but also so that differences in the social treatment of minorities do not go undermined or ignored.

Plus, how can we teach students to be racially blind when, in the real world, black people face disproportionate amounts of violence and discrimination? And let's not forget all of the cultural appropriation that's been running rampant lately. How do we excuse Kylie Jenner's controversial cornrows, when the reality is, people of color are often denied jobs for wearing their hair in that very same style — despite its deep-rooted cultural tradition? And why is Rihanna allowed to get away with wearing a burqa when actual Muslims who have to cover up for religious purposes are called terrorists and unfairly profiled when they wear the same thing? Why can Miley profit off black hip-hop culture when black people are punished for it?

Don't get me wrong — teaching students not to discriminate based on race is obviously a good thing, for a million different reasons. Just imagine: It could potentially create a generation of cops who don't arrest and incarcerate black people for... well, just being black. But teaching students that there's no such thing as racial distinction and race-based prejudices in the real world is unavoidably problematic. (In fact, it's why we've come to need movements like #BlackLivesMatter.) Instead of teaching our children to be color blind, wouldn't it be better to encourage them to embrace color and the cultures minorities represent? It's time to open our eyes — not close them.