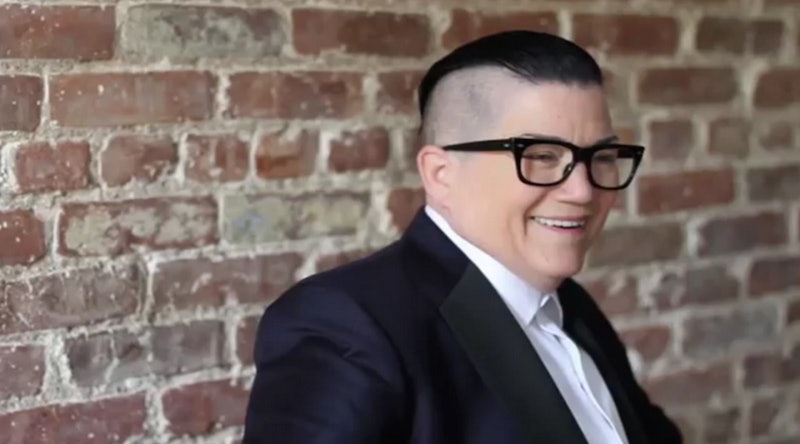 In StyleLikeU's latest installment of the What's Underneath Project — a series in which inspiring figures shed their clothing while being interviewed in the name of fashion and feminism — OITNB star Lea DeLaria (aka Big Boo) discussed a wide range of issues including queerness and body positivity. We all know how hugely talented and funny DeLaria is, but I know I personally hadn't realized just how groundbreaking her success is. DeLaria — a self-described butch dyke — has never been closeted throughout her entire career. And here she is, starring in one of the most popular shows of our day, winning awards, and loving herself exactly as she is.

The actress and comedian talked candidly to the interviewers about what it's like to be an openly gay butch dyke in the entertainment industry, and how that affects her personal life and style. DeLaria unflinchingly recounted the pain she has felt in being a queer person and her qualms with the way the media chooses to represent people like her. She describes herself as a "proud fat girl," and is inspiringly comfortable in her tattooed-covered skin while she sheds her dapper suit in the video.

DeLaria is clearly a champion of multiple identities, including queer and fat ones, and cares very much about giving voices to causes that would benefit marginalized groups. In her career, she has worked towards destigmatizing what it means to be a butch dyke, as well as asserting unconditional self love and body positivity, even in the face of fat shaming.

From the humorous details (#totescunt), to the real and raw topics she discusses (such as the time she was beaten at a Pride Parade), here are some of the highlights from DeLaria's interview with StyleLikeU.

DeLaria starts out the interview by expressing her latest mission in the name of feminism and social media:

"It's been my mission to turn 'cunt' into a positive word because it's so often used negatively. But usually as an adjective like 'that cheesecake was cunt.' I actually started a little hashtag #totescunt when something's really good. I love a cunt! Who doesn't love a cunt?"

2. When She Acknowledges That Stereotypes About Butch Dykes Frustrate Her

DeLaria discusses her disapproval of the way the media chooses to portray butch dykes, and how she tries to use her platform as a celebrity and a human to debunk these myths.

"My entire life [I've] been trying to put a positive spin on what it is to be butch. Media has always portrayed us as fat and stupid and we beat our wives and we cause fights, drive trucks..."

She also discusses assumptions that people have made about her because of her butch identity, and what it's like to deal with such stigmas. She recounted this experience in a gay bar:

"First, [women approaching me at the bar] would take a wide berth because they were afraid that I'm gonna hit them or something. 'Oh what's that? A martini? Why, you're not drinking a beer?'"

3. When She Talks About Being The First Openly Gay Comic On Late Night TV

DeLaria said her greatest accomplishment so far was being the first openly gay comic to perform on late-night when she went on the Arsenio Hall Show in 1994. As a comedian, she was known simply as "Big Fucking Dyke" for a while. Rad.

4. When She Says That Coming Out To Her Parents Was The Hardest Thing

Coming out can be a scary thing and for DeLaria, that was certainly true — at least when it comes to her parents. She had always been out in her professional career, but didn't come out to her conservative Catholic parents until she was 28. Pretty unbelievable. DeLaria herself thinks it's a little unbelievable that her parents never figured it out. "My father had no idea, none! And let me just say to that: Look at me! Look at me," she joked.

5. When She Talks About Sparking Change With Her Comedy

DeLaria explains why she pursued a career in comedy, and how the industry was a savior for her as a closeted queer person in a Catholic household.

"Stand up comedy in those days was a big activist tool, so that's what I started doing. I'm very grateful for that because I probably would have put a gun in my mouth if I didn't have that. Especially after 12 years of Catholic school, [thinking] everything's my fault..."

She also discusses how she wants her comedy to help inspire changes for others like her while recounting the time when she was badly beaten in 1980 at a San Francisco Pride Parade as a crowd of people watched.

6. When She Calls Out The Media For Erasing Older Women & Menopause

DeLaria condemns media outlets for not discussing menopause and other issues surrounding the lifestyle and health of aging women enough, often focusing on the needs of men instead. As a menopausal woman herself, she wants to see more discussion about aging. By having honest conversations about memory loss and "the itch," she hopes to aid in the visibility of older women.

DeLaria eloquently discusses the observation that men can live freely at any weight while women are often put under so much more aesthetic scrutiny. According to her, though, "Fat is not ugly. It is, in fact, quite beautiful." Towards the end of the interview, when asked why her body is a good place to be, she enthusiastically answered, "Because I love me! Look at this — what's not to love?"

She's such a champion for body positivity.

Check out the full video here, or on StyleLikeU's website:

More like this
Instagram & Facebook May Finally Lift Their Notorious Nudity Ban
By Allie Fasanella
Selena Gomez Dismissed Trolls' Comments About Her Body After The Golden Globes
By Stephanie Topacio Long
Adam Lambert Called Out The George Michael Biopic Over Potential Casting
By Sam Ramsden
Adam Ali Hopes 'Waterloo Road' Will “Subvert” Queer Misconceptions
By Sam Ramsden
Get Even More From Bustle — Sign Up For The Newsletter
From hair trends to relationship advice, our daily newsletter has everything you need to sound like a person who’s on TikTok, even if you aren’t.