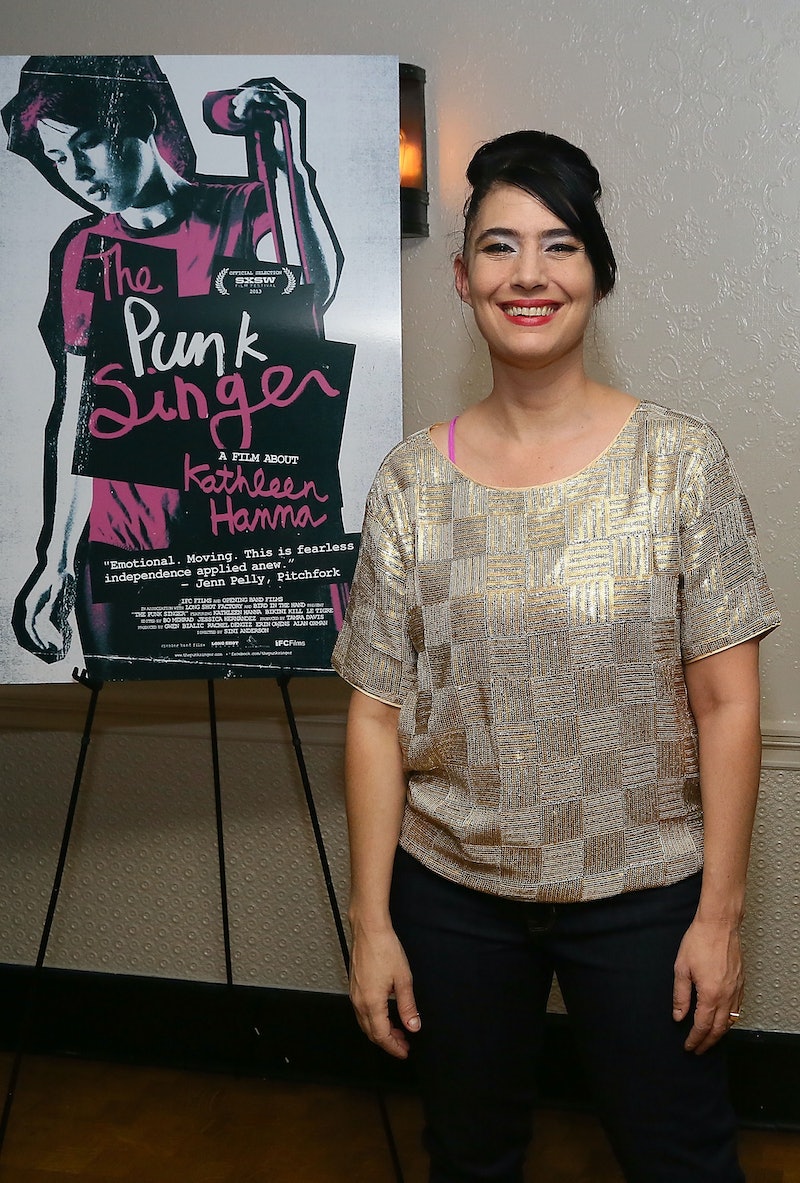 According to The Feminist eZine, “Riot Grrrl began in 1991, when a group of women from Washington, D.C., and Olympia, Washington, held a meeting to discuss how to address sexism in the punk scene.” Powerful women fronted bands like Bikini Kill and Bratmobile, and made music that intended to address misogyny, sexual violence, and racism to a certain degree. It was a time of empowerment, of “girls to the front,” and of a loud and in your face attitude.

The movement was originally very underground, with the members refusing to talk to journalists in the beginning. However, they eventually broke their silence to help the movement gain more traction. Much to the Riot Grrrls’ dismay, though, their efforts quickly became a media circus, and feminism was instantly trivialized by publications such as Newsweek and USA Today .

Besides generally writing the girls off, and therefore women as a whole, the media tried to reduce the movement to a fashion statement. Stories would focus on what the ladies were wearing rather what they were saying (or the words they were writing on themselves) — a theme all too common in our society. Like when in USA Today’s 1992 article “Feminist Riot Grrrls Don’t Just Wanna Have Fun,” Elizabeth Snead describes the scene of a Riot Grrrl meeting she attended: “A scrawny boy stands by, watching the group and the bouncing sea of mohawked female fans in Pucci-print minis. They sport hairy legs, army boots and tattoos.”

Of course, there is nothing wrong with journalists bringing attention to the details of a person or a story from a fashion and beauty lens, which I expressed to my classmates and professor. However, this intense focus on appearance, coupled with trivializing and sensationalizing the other parts of the feminist identity, made Riot Grrrl less of a movement and more of a trend.

As girls all over the country attempted to emulate Riot Grrrl media celebrities like Kathleen Hanna, the radical feminism of the '90s evolved from a philosophy into a commodity. People began rocking army boots and dying their hair crazy colors without the slightest idea about what feminism was or why it was important to them as female-identified people in society.

Commodification of identities and movements is super problematic, and unfortunately extremely prevalent in our consumer culture today. Certain young white celebs like Lena Dunham make feminism seem like a trendy and easily digestible product for the masses. Feminism is obviously genuinely important to someone like Dunham, but since she’s building her career around the concept, and is a sparkly, trendy figure in the public eye, she creates a lot of hype and discussion around the topic, bringing in new viewers for her hit TV show Girls and therefore making it appealing and consumable (although, as Dunham smartly puts in an interview with The Guardian, “If feminism has to become a brand to make change, I’m not complaining”).

In the case of fashion and beauty trends, though, commodifying something like feminism only results in imitating it. Imitation is not always the greatest form of flattery, and can oftentimes be pretty offensive and not genuine. There are more current examples in regards to publications as well, with websites publishing beauty pieces encouraging you to embrace your rebellious side, and proclaiming that "badass is the new cute."

These stories, which happen to include a lot of beauty routines that I utilize and cherish myself, feel condescending to my own identity, and get dangerously close to implying that things like feminism, rebellion, and queerness are nothing but The Next Big Thing. The beauty looks that I employ reflect a highly personal exploration of my queer and feminist identity, and this identity is not a “trend” that people can embody simply by emulating the way that I look. I know that I’m cute, and I don’t need to create or take part in a trend to believe that. But my politics and my sexual and gender identities don’t need to be cute or neatly packaged. My identity is not yours to commodify, it belongs to me.

More like this
Sandra Bullock, Girlboss Extraordinaire
By Matt Harkins & Viviana Olen
Lily Collins Swears By This Product For Perfectly Air-Dried Hair
By Keely Weiss
Kim Kardashian's Ombré Pink Mani Features A Nod To BF Pete Davidson
By Paris Giles
10 Swoon-Worthy Beauty Looks From The 2022 Cannes Red Carpet
By Olivia Rose Ferreiro
Get Even More From Bustle — Sign Up For The Newsletter