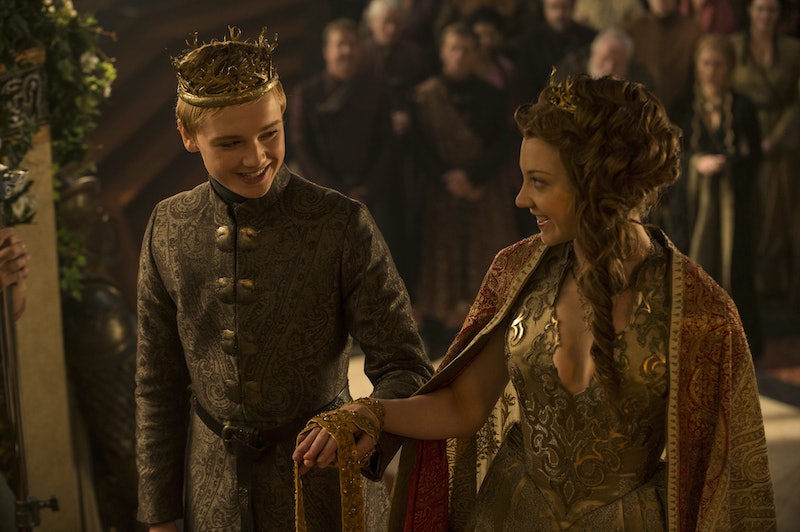 Whether you are a fan of the Kardashians or not, you have to admit that they have deeply affected pop culture, and changed the way that we view celebrities. Perhaps the most famous of the clan, Kim Kardashian, known for her stunning beauty looks, epic fashion, and polarizing romantic relationships, has been at the center of our culture and social media for nearly a decade. Like the Kardashians, HBO's Game of Thrones has also imprinted itself in our culture, changing the way that we view television, and the way that we read book series. Though both may seem like separate phenomenons, the Kardashians and GoT are more alike that I'd ever thought possible, and I'm not the only one who sees it that way. Actress Natalie Dormer who plays Margaery Tyrell on the mid-evil fantasy recently told the U.K.'s Express that Margaery is very similar to Kim Kardashian.

Dormer said that her character is, "The most modern of all the characters in Game Of Thrones. She is very much a PR genius. Now she would be one of those It girls, tweeting and Instagramming their latest dresses and raising money for orphanages by running half-marathons. She’d be rivaling Kim Kardashian for numbers of followers on Twitter and Instagram!”

Like Kim K., Margaery has used her charm and status in order to elevate herself to the highest status possible in society. Though I wouldn't quite compare Kanye West to Joffrey or Tommen, here are seven other ways that Margaery Tyrell is just like Kim Kardashian.

1. They Both Have Epic Fashion Sense

Like Kim K, Margaery has an eye for style. While Cersei and the other women of King's Landing stick to more traditional gowns, Margaery has never been afraid of bold colors and showing a bit of skin. What fun is there in being the Queen if you can't dress how you want to?

2. They're Both Quite Charitable

While Kim K has been highly praised for her recent work with the Children's Hospital Los Angeles, Margaery Tyrell has also been an advocate for the less fortunate. During her wedding to Joffrey, she made sure that all of the leftover foods were given to King's Landings' most impoverished citizens.

Besides her sisters, Kim K has quite a large circle of friends. Margaery is no different. Though she's quite close with her brother Loras, she is also very friendly with her handmaids. She went out of her way to befriend Sansa Stark when she was still living at the Red Keep.

Kardashian was catapulted into the spotlight when she experienced a heinous invasion of privacy. Instead of being shamed or cowering the corner, Kim K pressed forward to become the woman that she is today. Likewise, Margaery's loveless marriage to Joffrey could have been the end of her. Luckily, he didn't make it to their wedding night, and Margaery was able to use her wits and charm to marry his younger brother Tommen. Though she is currently locked away in a dungeon, I'm sure she won't let this small setback stop her.

5. They Love Their Guys

Think what you want about Kimye, but those two are madly in love; if nothing else, that love created the exquisite North West. Like Kimye, Margaery and Tommen mesh extremely well. He's soft spoken and gentle, and she's kind and lighthearted.

6. They're Tight With Their Mom (Or Grandma)

It's no secret that Kim K's momager Kris Jenner is also her BFF. The two women have an extremely close relationship that extends beyond business and family. Likewise, Margery and Grandmother Olenna Tyrell also have a fantastic relationship. It's because of Olenna that Margery isn't condemned to live out her days with the monstrous Joffrey.

7. They Stand Up For Their Siblings

Kim Kardashian and her siblings have had some very public disagreements. Despite all of that, they are still loyal to one another and stand against anyone who tries to hurt them. Margaery is the same with her bother Loras. When he is put on trial because of his sexuality, she steadfastly defends him, even though it leads to her imprisonment as well.

Though Margaery Tyrell and Kim Kardashian live centuries and worlds apart, it's not too hard to see how both of these extremely powerful women are similar.