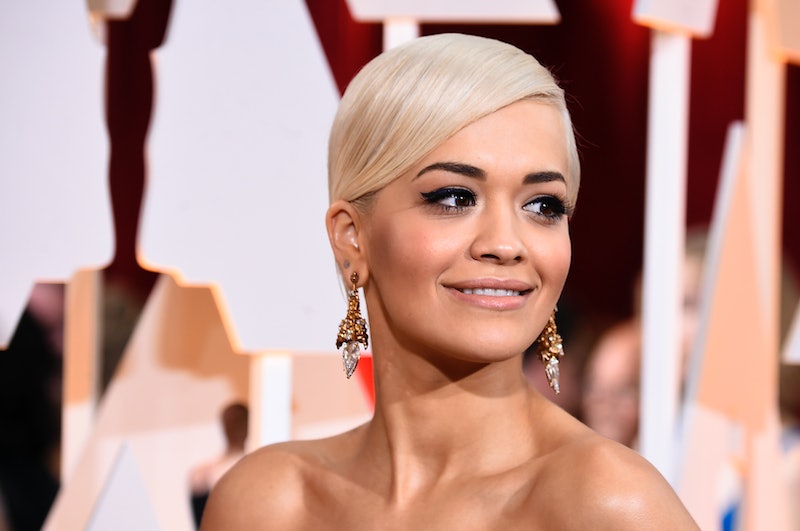 Ugh, you guys! None of my friends will tell me anything lately. They're keeping me totally out of the loop! And when I say "friends," what I mean is "celebrities," because they're all keeping me in the dark about their blossoming relationships, and I have to find out on the Internet, of all things. The indignity. Such was the case when I rolled out of bed this morning and saw that there's speculation that Rita Ora and Wiz Khalifa are dating, because they've been spotted being a coupla snuggly bears together all over town. Oh very cool, guys. Were you even gonna tell me that you'd developed a carnal knowledge of each other, or am I just supposed to draw that conclusion on my own from all the photos of you guys holding hands at the Teen Choice Awards? I GUESS I HAVE MY ANSWER.

Sorry I'm talking like an insane person who swallowed a weird dictionary, I'm just hurt and, IDK, betrayed? On Monday night 27-year old Khalifa and 24-year old Ora hung out for the second night in a row(!), having dinner together at a restaurant called The Nice Guy, and they never called me once even though there were photographers everywhere so they must have known I'd find out.

Ora has previously dated people like Rob Kardashian, Calvin Harris, and Bruno Mars, so even though there hasn't been any official confirmation yet, Khalifa seems pretty on-game for her. And for his part, Khalifa has previously been linked to Amber Rose, whom he is technically still married to, although Rose filed for divorce in September 2014 after just one year of marriage. The couple has a son together, Sebastian.

Best of luck to Ora and Khalifa in their romantic endeavors, I GUESS. I'll just be here turning my phone off and on over and over again to make sure I'm not missing any calls or texts from them. The nerve.

More like this
Selena Gomez Is Fine Being Single, But She Still Manifested Romance On 'SNL'
By Martha Sorren, Jake Viswanath and Jack Irvin
Tanya Burr Is Expecting A Baby With Her Mystery Partner
By Maxine Harrison
Ralf Little’s Fiancée Has A *Very* Impressive Resumé
By Sam Ramsden
Bachelor Nation's Blake Horstmann Is Dating 'Love Is Blind' Star Giannina Gibelli
By Jake Viswanath and Radhika Menon
Get Even More From Bustle — Sign Up For The Newsletter