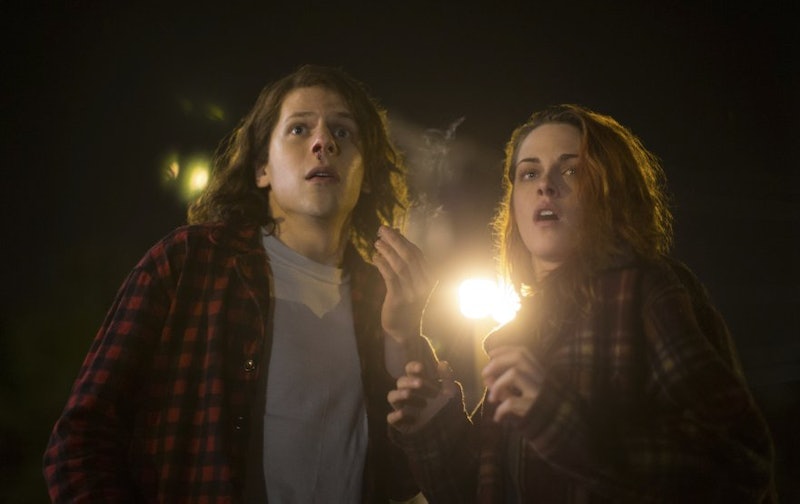 In the new Jesse Eisenberg and Kristen Stewart stoner comedy American Ultra, Eisenberg's character Mike learns that he's part of a Central Intelligence Agency program and trained from a young age to be a lethal killer. But he only comes to this knowledge when the program has gone defunct and he finds himself targeted for termination. His CIA handler sacrifices career and well-being to rescue him, though Mike soon learns his instincts make him more than equipped to rescue himself. On the record, Mike is known as a "supersolider," and it's the kind of thing that's just absurd enough to maybe actually exist. So are CIA supersoldiers real?

It turns out that supersoldiers are a science-fiction invention. The traditional super-soldier has undergone some sort of psychological, genetic, technological, or even magical intervention in order to give him (or her!) supernatural powers (usually strength). But there are conspiracy theories out there that posit that some elements of supersoldier-dom resonate just a little too much with actual government programs to be entirely invented. To quote a cliché, truth is stranger than fiction, right? These theorists inhabit some very dark corners of the internet, but their ideas infuse mainstream pop culture and even seem reflected in some lesser-known military experiments. Out of morbid curiosity and the selfish need to dispel my own paranoia (mostly unsuccessfully), I've looked into a few of the incarnations of supersoldiers, both fictional and real.

In 2012, the Daily Mail reported on a project designed to engineer soldiers to superhuman proportions. The Pentagon-funded Cold War relic DARPA, the Defense Advanced Research Projects Agency (whose budget, according to the Daily Mail, totals $2 million) was working on an exoskeleton designed to help soldiers lift enormous weights and run faster. The video above, which stars the man who plays Agent Coulson in Iron Man, demonstrates that the project is far from mythical — there are prototypes and everything.

Remember that scene in the Captain America film when Chris Evans's head is absurdly transposed onto a scrawny boy's body? (Or perhaps the reverse, when Chris Evans's head is absurdly fixed onto a super build body.) Captain America, AKA Steve Rogers, first enlisted in the Army as a physically less-than-ideal young man, but he soon becomes part of a military program designed to create supersoldiers — and the Marvel myth is born.

Chuck And The Intersect

Bryce Larkin might have had the looks and the martial arts moves, but the eponymous hero of Chuck had an entire computer in his head. The Intersect is a massive store of CIA information, a database that only exists in one man's mind. Chuck "flashes," meaning that when he sees something that rings a bell with the computer, he unconsciously accesses all the necessary information on that person. Chuck is an unassuming target (he works at a fictional electronics store), but an immensely valuable one for groups who will stop at nothing to get their hands on such guarded intelligence.

Another postapocalyptic DARPA creation, the Z-Man suit would allow soldiers to climb walls using a suit covered in tiny hairs (much like the way geckos scale vertical surfaces, leading the University of Massachusetts at Amherst researchers to dub it "Geckskin"). Cracked reported on the suit, though when I tried to access the DARPA page on the project, all I got was a very disconcerting "Access Denied."

The Men Who Really Did Stare At Goats

Jon Ronson's 2004 book The Men Who Stare At Goats shouldn't be a true story, yet it is. It takes its name from the America psy-ops teams who would stare at goats for hours on end, willing them dead with their minds. It only gets stranger from there — with a mix of cynicism, wry humor, and reverence, Ronson uncovers the perplexing history of psychological warfare in the United States.

It's a college student's dream — drugs that will increase alertness, decrease stress (especially of the post-traumatic variety), and reduce anxiety. But it's also a very real experiment, according to the Independent, on various pharmaceuticals that might alleviate some of the side-effects of soldiers' active schedules during duty. According to the report, soldiers sleep around four hours per night, resulting in stress and decreased skill on the battlefield. Scientists are working on various drugs like beta blockers that will counteract those ill-effects.

I'd like to think that most of these won't yield any mass-market results, and that the fictive supersoldiers will remain that way. But there might be something to what the conspiracy theorists across the web propose — various military and government branches have experimented with plugging the holes of human weakness, and fiction has gone even further. Comics like X-Men and Captain America — and even, to some extent, American Ultra — explore what it would mean to humanity to create physically superior beings, and how it might go right or wrong. The Eisenberg and Stewart stoner comedy just puts a humorous face on it.