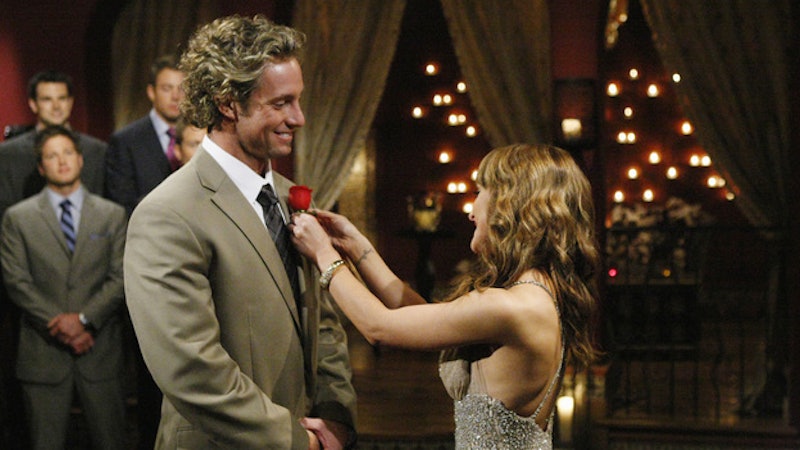 It's always a coin toss with these Bachelor in Paradise contestants. Sometimes they get the big names that you feel like are your best friends (hi, Tenley!) and sometimes a new person shows up who you cannot remember to save your life. This is my problem with Bachelor in Paradise newcomer Nick Peterson. Sure, he looks vaguely familiar in that "generically attractive/harmless nice guy" way but I couldn't remember his stint of Ashley Herbert's season of The Bachelorette at all. I did a little digging and realized why — with all the Ashley/Bentley drama on that show, he was pretty much overshadowed. Plus, I never caught Bachelor Pad so I missed his reality success there.

Quick primer for those of you struggling to remember The Bachelorette Season 7 (way back in 2011!), this was when the guy with the mask emerged from the limo and stayed masked-up for way too long. This was also the season when Bentley wooed Ashley for, like, two days then decided he wasn't into her and quit in Week 3. Ashley spent much of the season being sprung on him and not being able to move on, but she eventually picked J.P Rosenbaum (and they're still happily married). But, enough about that, on to what Nick did on Ashley's season, before getting kicked off.

He Fought Against Insecurities

He started the season fighting a bit of an uphill battle with Ashley, who was feeling insecure that people were there expecting the Bachelorette to be Emily or Chantal.

In one of the poorer choices for a first date, all of the guys (including Nick) had to "roast" Ashley. Nick played it safe, mainly just insulting the other guys, which was a smart move because she eventually left crying. Seriously, who insults the lady on a first date? (Most of the guys picked on her for having small boobs btw.)

There was some drama and posturing during this Thailand date, but, again, Nick was more of a background player here. Though he did help out at the orphanage, so that gets him points even if there was no drama.

He Participated In Some Light Muay Thai Fighting

You know, normal things to do when you are wooing a lady. Nick went up against fellow competitor Constantine and lost. It was all pretty overshadowed by Ames having to go to the hospital for a Muay-Thai induced concussion.

He Was Booted In Week 5

The personal trainer was eliminated during the Week 5 rose ceremony, and he actually seemed pretty torn up about it. Nick was pretty sure he and Ashley were on their way to love, and who knows? Maybe there was more there than what the cameras showed. Either way, he made a small impression on the show but came back in a big way for Bachelor Pad where he took on a villain label to win a quarter of a million dollars. Although there's no cash prize for BiP, maybe he will have the same luck and meet the love of his life. Hopefully he can do that without becoming the bad guy again, though.