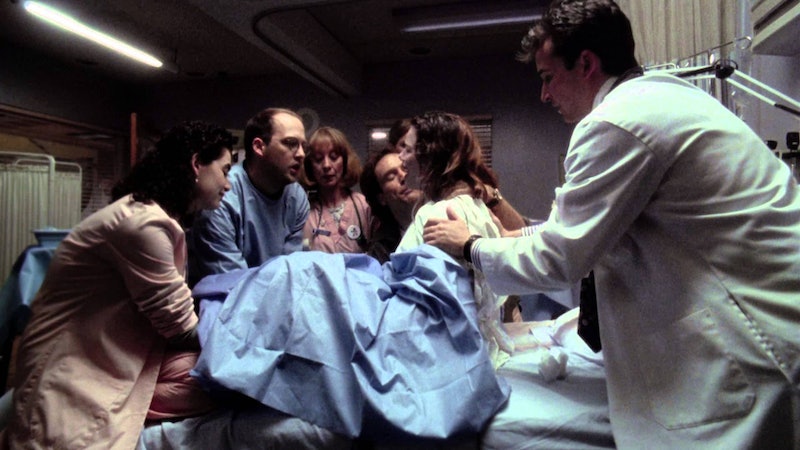 It only strikes me now that I was probably too young to be watching ER back in the day. Or, at least I was too young to fully appreciate the depths of tragic beauty that episodes like "Love's Labor Lost" brought to NBC's blockbuster Must See TV Thursdays. But I was as much a TV junkie 20 years ago as I am now, so I remember vividly seeing the tale of one of the worst night's in Mark Greene's life on its first airing. I just rewatched it to be sure of its quality, and guess what? "Love's Labor Lost" still stands up as a gorgeous piece of television.

"Love's" is the nineteenth episode of the show's first season, long before the second and third generation of ER docs took over... long before those opera gloves Amal Clooney wore to the Golden Globes. This story, which was written by writer and physician Lance Gentile and directed with flawless pacing by Mimi Leder, was the one that heralded the medical drama's arrival on the awards scene, taking home five Emmys, including trophies for both Gentile and Leder. The script follows Dr. Greene as he deals with a case that lies outside of his field of expertise, proving that even dedication and the most sincere of intentions can only do so much. But in case you need proof, here are 19 more reasons why "Love's Labor Lost" is forever one of ER's finest.

1. It Stars The Show's OG Cast

No offense to any of the fantastic actors who came through later, but the original County General staff will always be my babies.

2. Doug Ross Calls Someone A "Butthead"

And that means George Clooney calls someone a "butthead." Not for the last time, I'm sure. I assume that term was thrown around quite a bit on the Ocean's 11 set.

3. Benton Is All Gruff About His Mom's Accident, But Is Probably Dying Inside, So...

Oh, Peter. You always did have a gooey, emotional center. Here, he deals with the aftermath of his mother's fall: a broken hip. He deals with it by yelling at everybody, like he deals with everything else.

4. This Guy Tried To Sand His Own Tattoo Off — Respect

All my Josh Lyman feelings. Look at him. All brand new and excited to be a dad.

Mark diagnoses Jodi, the expectant mother, with a bladder infection and sends the two on their way to argue more about baby names. Fingers crossed we won't be seeing them again.

6. Mark Is Going To Be An Attending & He's Precious And Excited About It

He's yammering to Carter about "making an immediate difference" in his patients' lives. He's so pure-hearted and just wants to help people. Now, ER will crush his spirit.

7. This Lady Is My Hero & Asks The Doctors To Sign Her Own Get Well Card

8. Doug Saves Another Young Life, Because How Else Would My Ovaries Know That They Are Alive?

The case of the poisoned child only takes up a few minutes of screentime, but let's allow Doug this moment of dashing heroism.

Forever my ER OTP, these two. They are constantly in each other's space, which I suppose makes it all the easier to have each other's backs.

Here, they're reviewing Jodi's chart. She's been re-admitted and newly diagnosed with eclampsia. Mark stays to "see it through," and damned if Susan is going to let him do this alone.

10. This Lady Surgeon Will Not Let Benton Intimidate Her, Thank You

"She may be your mother, but she's my patient." You better let him know.

11. Mark Names The Baby He Doesn't Know He's About To Deliver

Jodie and her husband Sean each hand Mark their baby name lists. "Jared" is the only one on both. "Compromise is the soul of marriage," he advises. Jared, it is. What a guy.

12. Jodi's Situation Worsens & They've Got To Get The Baby Out ASAP

All the OBGYNs are busy with other patients, so the ER docs have to handle it. She's still Mark's patient, and he does everything he can for her.

13. It's A Gigantic Sweaty Mess & Almost Everything That Could Go Wrong Does

It's a painful punishment of a scene. Everyone is sweating and straining. The parents look scared out of their minds. And there's even a decently long shot of the baby half emerged. Raw stuff for network TV, both physically and emotionally.

They get through the birth, even though the baby gets stuck on Jodi's pubic bone and has to be pushed back in. The doctors get baby Jared breathing after a few more scary minutes, and then Sean rushes to get a glimpse at him before they take him away to the NICU.

15. The Head Of Obstetrics Scolds Mark For His Actions & Susan Is NOT Having It

Jodi is stabilizing and the baby should be fine. But Dr. Coburn showed up late and only saw the mistakes, not the circumstances. Susan tells Mark to ignore her, but he's still blaming himself for the challenging birth.

16. Jodi Crashes, & They Can't Save Her. Mark Almost Has To Be Pulled Out Of The Room After Trying To Resuscitate Her For 30 Minutes

He keeps applying chest compressions, even after Dr. Coburn has declared a time of death. For as glorious of an episode as "Love's Labor Lost" is, sometimes I wish I could un-see it.

17. He Tells The Father & Every Single Heart Breaks, Everywhere

The audience can't even hear what Mark says to Sean as they watch them through this door. They only hear the baby cry and see Sean crumple. Remember the tattoo guy? I want him back.

And being John Carter's hero is an admirable goal to aspire to, to be honest.

19. But Mark Still Weeps On The Train

But only after telling his colleagues that he's "OK." Poor, sweet Mark: you're going to see so, so much worse.

More like this
What Is the Net Worth Of Each 'Stranger Things' Season 4 Cast Member?
By Hugh McIntyre
6 Mind-Blowing Fan Theories About How Stranger Things Will End
By Kadin Burnett
Why Sadie Sink Is Hopeful Max Will Return In Stranger Things Season 5
By Brad Witter
'Stranger Things' Star David Harbour Has This Actor In Mind For A Hopper Spinoff
By Alyssa Lapid
Get Even More From Bustle — Sign Up For The Newsletter