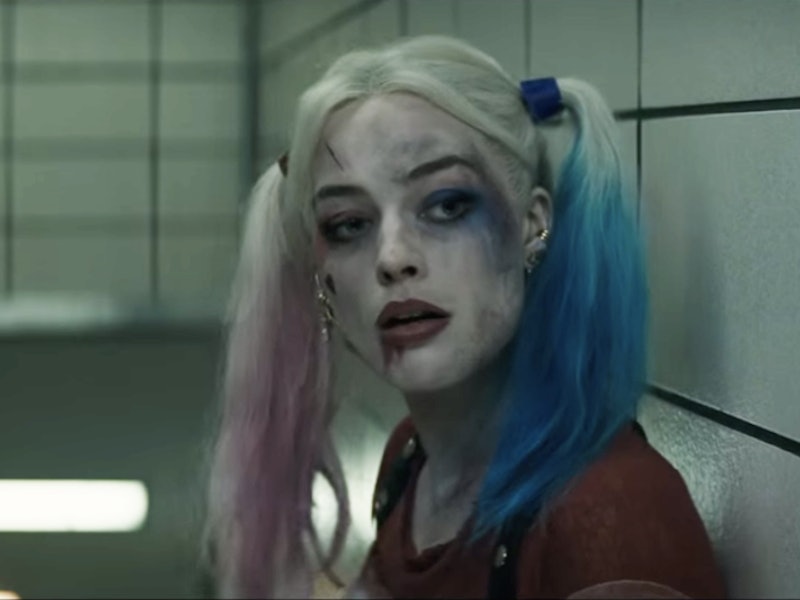 The Suicide Squad didn't really need any other promotion in order to draw me in other than to mention it would be Harley Quinn's big screen debut. Margot Robbie will portray my favorite DC villainess, and, from the Suicide Squad trailer, she is going to do so with style, aplomb, and quite a lot of mischief — everything my precious Harley deserves. Director David Ayers has been great about giving us sneak peeks and inside looks at the filming, and Tuesday was no different. Using Twitter, he posted a picture of Harley Quinn giving someone a tattoo on the Suicide Squad set, a tattoo that goes about as well as you would expect considering who was giving it. Sometimes, it was all too easy to forget that Harley was a notable psychiatrist before the Joker drove her crazy (with love).

The photo of Robbie in full costume bent over someone's arm with a tattoo needle was tagged with the hashtag #skwad, and the follow-up picture showed that a little bit of misspelling occurred during the process (ahem, there's no "E" in parlor, Harley, whether you add a 'U' in or not). Despite that, it was an admirable job well done, popping with color and beautiful calligraphy that would make my old art teacher jealous. I mean, check it out. Misspelling or no misspelling, wouldn't you love to have Harley Quinn emblazon this on your skin?

OK, maybe not. But the idea of Harley as a tattoo artist is too cool to let go, especially considering how amazing her style is. From the way she dyes her hair to the way she does her makeup, from her amazing outfits to her nonchalant madness, she's been doing what the Joker does but better since Batman: The Animated Series. (Yeah, that's right, I said it.) And if her tattoo skills look that good, and don't just result in her writing "Mr. J" in a gigantic heart on someone's arm, then who are we to judge her non-criminal dreams?

Whether or not Harley will actually be a tattoo artist for any reason during the film still remains to be seen, but it's an idea that I'm already attached to. If Robbie can make the clown queen of crime bent over your arm with a needle look cool instead of horrifying, it's definitely worth exploring. Check out the picture below.