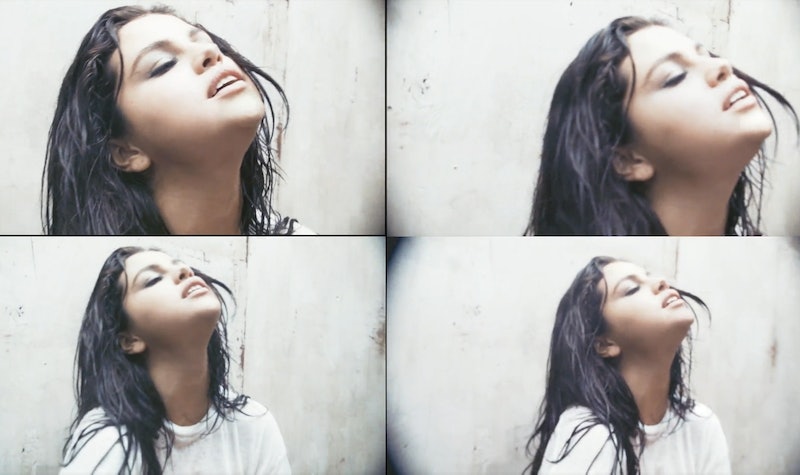 When I noticed that Selena Gomez had put out a music video for "Good For You," it felt so much like deja-vu that I briefly worried that I'd fallen into a Groundhog Day situation. Didn't this already happen? Haven't I already seen the video for "Good For You?" Did I fall and hit my head? Where is Andie MacDowell, and am I supposed to make her mine? But, as excellent as all those questions are, it turned out that I had nothing to fear, and my brain was working just fine, because this had all happened before. Gomez first dropped this video all the way back on Jun. 26, after releasing a bunch of teasers getting us psyched up about it, so I don't need a lobotomy after all. Hurray!

So that brings me to my next question: why did Gomez release a video that she'd already put out? Well, turns out it was just to add A$AP Rocky. His vocals can be heard on the original track, and he not only produced, but also co-wrote the song, alongside Julia Michaels, Justin Tranter, and Nick Monson, but, for some reason he didn't appear in the original video at all. Instead, they stripped away some of the harder club sound and made it just about Gomez and her vocals. For the duration of the original video, the camera left her face only to take in her body as she writhed on a couch, writhed on the floor, writhed in various robes, and looked soulfully into the lens as she showered. It was a solid, simple video, and you can take a look at it right here.

And, now, if you're ready to see most of that again, here's the new video. It features Gomez in all the same be-couched and be-robed glory, but also includes some shots of Rocky throughout, whether walking in front of a screen projecting an image of Gomez, or, y'know, actually getting some camera time of his own during his verse. Which was added back in for this version, along with some of the deeper, less unplugged sound. Take a look.

So there you have it! Verrrrry little has changed in what Gomez is doing in the two videos; she's just giving us the dash of Rocky that was strained out in the original. Although, to be perfectly honest, I'm still not entirely sure why she left him out of the first video, giving the level of his involvement. But all's well that ends well! We're glad to see you back, Rocky!