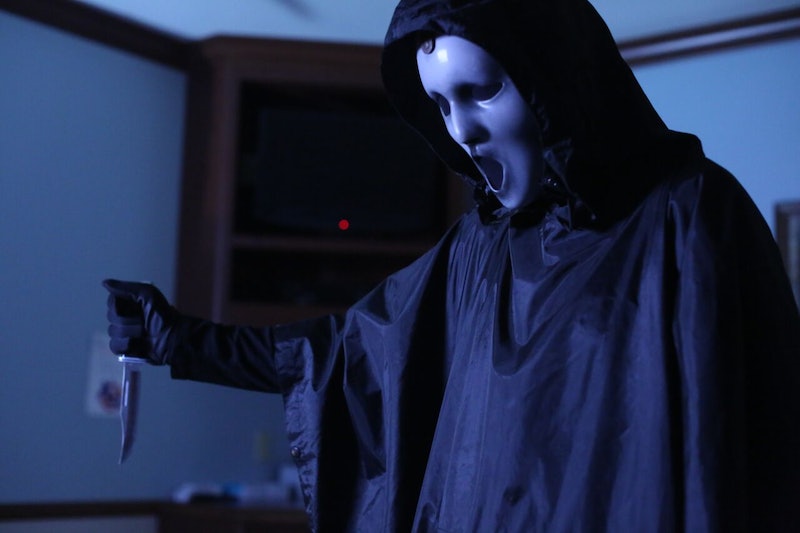 We're getting down to the wire on MTV's Scream — and by "the wire," I mean we're running out of characters that still have a pulse. The gory, nightmarish death of Emma's ex-boyfriend Will officially crossed him off of the killer suspect list, and opened up a world of possibilities for who the killer — or rather, killers — could be. But, while there are plenty of people that the characters on the show suspect (from Brooke's shady dad to, uh, Emma's shady dad) there are only two people in my mind who truly have slasher potential. Could Piper and Kiernan be the crazy killer duo parading around Lakewood in the Brandon James masks? If you ask me, these two might not be nearly as innocent as they seem.

Tuesday's episode "Ghosts" revealed something major about Brandon James and Emma's mother Maggie, and personally, I believe that it points the finger right at podcaster Piper. Maggie confided in Emma that she and Brandon slept together after Maggie had a fight with Emma's dad, and that she became pregnant with Brandon's baby. Maggie gave up the baby for adoption and never found out whether it was a boy or a girl. If Brandon really is dead, that means that there's a chance that it's his son or daughter that is carrying out his legacy — something that Emma says outright during the conversation with her mother. Could Piper be Brandon's daughter?

The short answer? Absolutely. Realistically, Piper is one of only two characters who fits the appropriate age to be Maggie and Brandon's daughter — she's maybe 10 years older than Emma at most. The only other option in terms of characters we know is Mr. Branson, and considering the sheriff arrested him two episodes out from the finale, I'm thinking he's nothing more than a red herring. Plus, Piper told Emma that her father was murdered — just like the potentially innocent Brandon was by the police.

Definitely not a coincidence. Just saying.

Now let's talk Kiernan. If we're operating under the assumption that Piper is one of the copycat killers, then we have to think about who her potential partner could be. The person most likely to be working with Piper would have to be someone that we've seen her interact very little with — or at least, very little on their own. Kiernan has had very few interactions with Piper — and no solo conversations that we know of — but it's not the only reason why we should all suspect him.

Kiernan has always seemed like a good guy, but the truth is, we know very little about him — and what we do know about him is downright bizarre. Kiernan's mother and stepfather died in a car crash just weeks before he moved to Lakewood, and yet he barely seems shaken up by the whole thing. In fact, he even told Emma that he tried to cry when his mother died, but couldn't. Was that him explaining the complicated nature of the grieving process — or suggesting that, perhaps, he's a sociopath who doesn't feel anything?

What really sealed the deal for me on Kiernan's involvement was the brutality of Will's death. Will died barely one hour after Emma told Kiernan that she still had feelings for Will, and that she didn't think she should continue seeing Kiernan because of it. Kiernan seemed understanding at the time, but we have no idea what he did after he left Emma's house. He could have very well marched right down to the farm and set up the trap for Will to get back at Emma for breaking his heart.

And after Will's death? Well, Kiernan would get Emma all to himself.

Then there's the big question: how are Piper and Kiernan connected? They might not have to have much in common other than a thirst for blood. Piper is a true crime reporter — perhaps she learned that Kiernan had committed a crime and decided to "recruit" him for the Lakewood murders. Maybe Kiernan's first murder was staring us in the face all along — his parent's car crash death. We know that one of the killers staged Tyler's body to look like it was the victim of a car wreck. Kiernan could have easily pulled that one off if he tried it out first on his own parents.

It's a pretty dark theory, but hey, this is Scream: we literally just saw one of the show's main characters get sawed in half by farm equipment. Only two episodes remain until the killer reveal, and I'm putting my money on Kiernan and Piper as Lakewood's big bads.