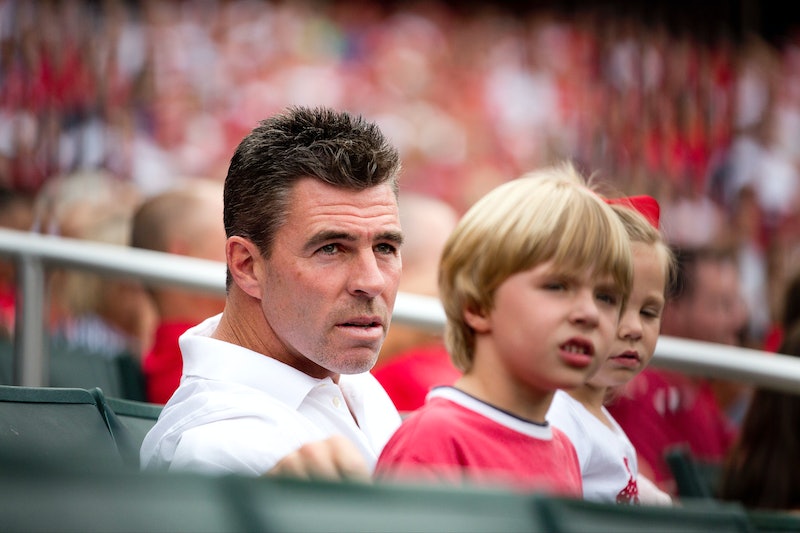 Before Meghan King Edmonds married Jim Edmonds and became a Real Housewives of Orange County darling, the 30-year-old's seat at the head of the reality television table was nearly taken up by someone else: Jim Edmonds' second wife, Allison Jayne Raski. Meghan's close relationship with Leann Edmonds Horton, Jim's first wife, who died in July after a battle with cancer, is well-documented and regarded by many as a true blue example of how to handle divorce and blended families with grace and ease. So some may be wondering whether Meghan and Raski will strike up a similar bond and if they'll cement their friendship by joining forcing on RHOC.

As great as that would be, I wouldn't hold my breath for it to happen.

For one thing, Raski lives in St. Louis with two small children, Landon and Sutton. Meghan and her MLB hubby often visit the Midwest and Meghan is constantly documenting the precious time she spends with her stepchildren, but so far, their biological mom has managed to keep herself out of the camera's way. There isn't a single second of footage showing her waving bye to the kids or throwing Meghan poison dart stares. In order for her to appear on the show on a consistent basis, she would have to agree to either move her children out to California or split their time between St. Louis and Orange County, which wouldn't work given their school schedules.

Another reason she probably wouldn't do it: Raski and Jim had a very low-key wedding in 2008, according to MLB.com — so casual that he wore a t-shirt, jeans, and sneakers, they got married at a courthouse in St. Louis, and celebrated with a reception at a steakhouse. In contrast, Meghan and Jim's wedding was all kinds of fabulous glam, and I don't think sneakers were an option.

My point? Raski doesn't seem like the type of person who either desires fame and attention, nor expects it. She's low-maintenance. Sure, she reportedly met with the O.C. crew prior to Meghan's appearance on the show and is even said to be friends with Heather Dubrow, but the fact remains: Unlike most of the Housewives, Raski has almost no presence on social media and chooses to keep the accounts she does have private. If she joined the show, she would have to be willing to give up huge chunk of her privacy, and I don't see that happening.

But, really, I'm beating around the bush and not stating the obvious. The number one reason why Raski is not going to appear on RHOC is because there's too much dumb talk about how Meghan might have stolen Jim from her, even though Meghan says Raski was already dating her current boyfriend for four months prior to when she hooked up with the baseball player.

Meghan is just beginning to develop a fan base on the show and I can't imagine why producers would invite Raski on to shake things up — unless, of course, the two already have a decent relationship we don't know about. And, if they do, the fact that Meghan doesn't post about it on Twitter or Instagram goes against everything she has been doing with every other one of her friends.

In a nutshell, no one has anything to gain from a Raski regular appearance on RHOC — not Meghan or Jim or Raski herself. Mark my words, it's never gonna happen.