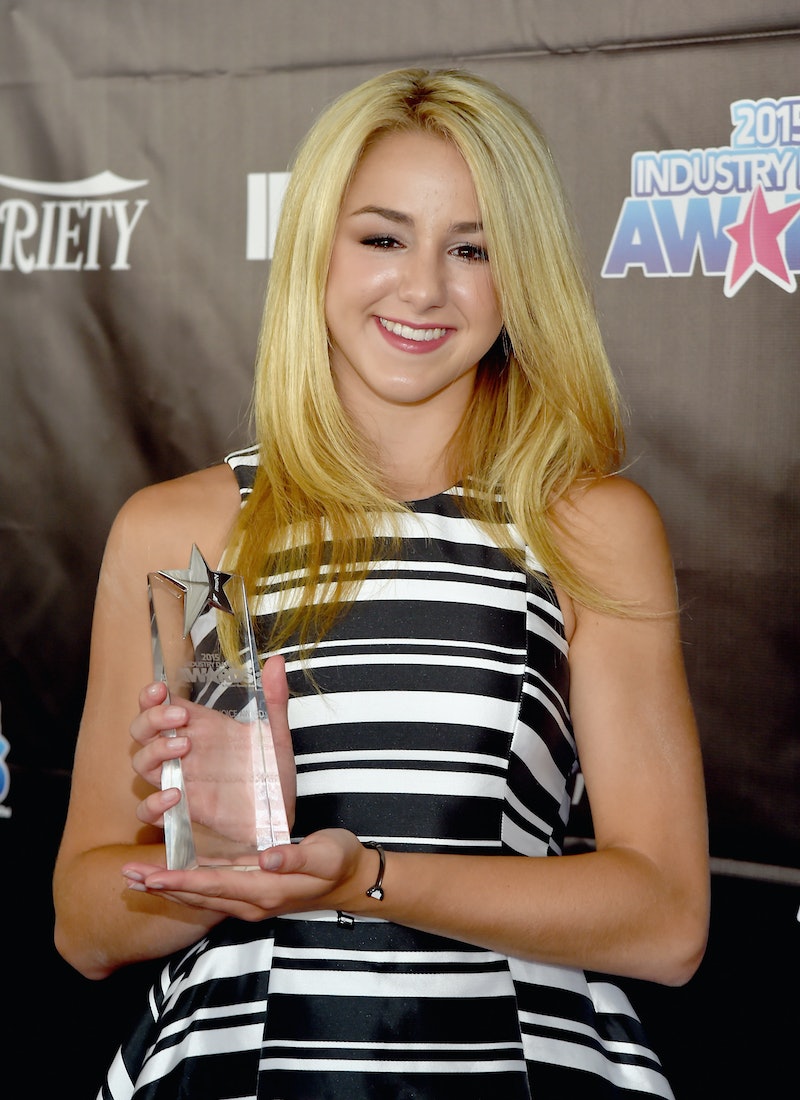 Just a few days after winning "Choice Dancer" at the Teen Choice Awards, Dance Moms alum Chloe Lukasiak won the Industry Dance Award for "Favorite Dancer — 17 & Under" on August 19. To say that Chloe is killing it this summer would be an understatement. And, to think that at this time last year we were watching her essentially get berated by Abby Lee Miller to the point where watching the show was no longer even enjoyable. Well, it looks like the joke is on Abby, because she lost one of the most talented dancers in the country.

Chloe's Teen Choice acceptance speech was on point, especially her final words: "To anyone who's been told they can't do it, shouldn't do it, or they aren't good enough... ignore it, do it anyway, and prove them wrong!" Everyone who has ever watched Dance Moms knows that Chloe isn't simply telling fans what they want to hear — she's speaking from her own painful experiences. Although she consistently declines to speak ill of her former dance teacher during interviews, Chloe has taken her difficult experience at the ALDC and turned it into a positive by sending the important message to fans that they should never give up on their dreams. Not only does she set an amazing example for the countless young girls who look up to her, but us adults could also learn a thing or two from Chloe about resilience, strength, and using painful experiences to motivate us rather than bring us down.

Here are four reasons Chloe is so deserving of her recent accolades, and why she's an amazing role model to so many people:

1. She Showed Extraordinary Strength During Her Time At The ALDC

Chloe was just 10 years old when Dance Moms premiered and 13 when she and her mother Christi left the show. To viewers it seemed as though Abby's treatment of Chloe escalated as the show went on. At one point the coach even refused to call Chloe by her name because she was butting heads with Christi. Since Chloe is human, she certainly had her moments of looking rightfully sad and hurt, but she showed incredible strength throughout her four seasons on Dance Moms. As a former dancer, I can say that it's incredibly difficult to be passionate about something but also know that every time you step into the studio there's going to be a teacher who would rather break you down than help build you up.

It seems Chloe's decision to leave the ALDC was 100 percent the right move for her, but while she was there, she made the most of it and kept up a positive attitude. She sets an amazing example for anyone who loves an activity, dance or otherwise, but doesn't happen to be the favorite in their class. Teachers and coaches aren't always right, and sometimes they don't appreciate their most talented students. If you want proof, just look at Chloe!

2. She's Always Humble, But She Also Knows Her Own Potential

During her four seasons on Dance Moms, I can't remember a time when Chloe gloated about a victory or acted as though she'd been robbed of a win. That's incredibly admirable for anyone who is performing in high stakes competitions week after week. Still, she recognized that just because she wasn't Abby's favorite, didn't mean she lacked talent or potential. She may be young, but Chloe has already found the perfect balance of humility and confidence — and that's something many adults lack.

There were countless moments on Dance Moms when it would have been so easy for Chloe to just walk away and give up on dance altogether. After all she'd been through at such a young age, it would have been totally understandable — but Chloe's way stronger than that. Instead, she chose to pursue her passion for dance in the different training environment of Studio 19 Dance Complex. And, her training is going extremely well — Chloe was always an incredible dancer, but her improvements over the past year have been nothing short of amazing. I doubt she would have had the opportunity to hone her skills if she had stayed at the ALDC for Season 5. The fact that Chloe's won two major awards this summer proves that she made the right choice by enrolling at Studio 19 and saying "goodbye" to Abby.

4. She Doesn't Take Anything For Granted

When Chloe won the Industry Dance Award, she focused on thanking her fans and expressing her gratitude for their support. Although her dance talent alone proves that she totally earned this award, Chloe never assumes that she automatically deserves anything. The reason she has so many devoted fans is because her talent, work ethic, determination, and humble nature make it pretty impossible to not root for her success.

To say that Chloe has proven Abby wrong would be an understatement. And, I know that Chloe is going to continue racking up well-deserved awards for years to come — and that's way better than being on top of the Dance Moms pyramid.