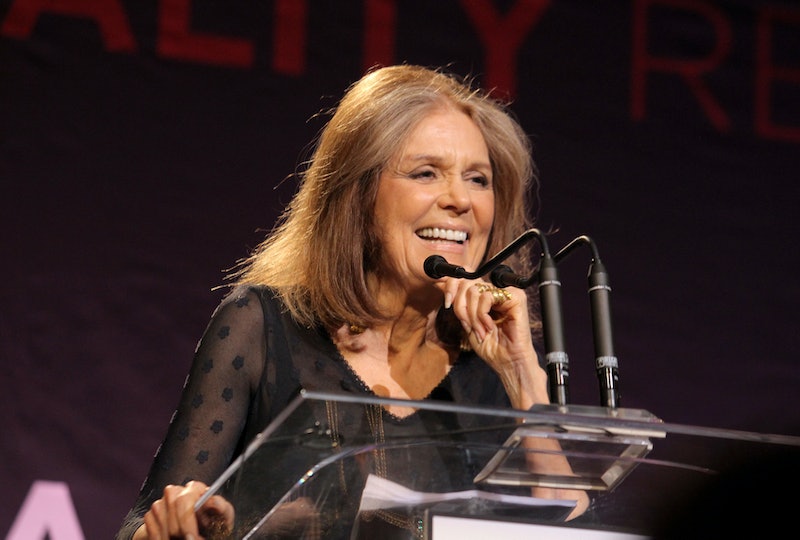 Feminism has had many notable figures rise during its waves, but perhaps no other name comes to the forefront than the one that belongs to the subject of a new spread in New York Times style magazine T. With quick facts and number shoots about the Ms. magazine co-founder, T's column breaks down why Gloria Steinem is the feminist icon revered today. A look at Steinem's life and career not only touches upon how much has changed since she first rose in prominence as one of the leading feminists in the country, but also is a poignant reminder that there's still plenty of work to be done for women's rights.

In 1969, there were just 11 women in Congress. As of this year, that number has jumped tenfold to a record 104 women serving on Capitol Hill. It's a notable feat for the feminist movement, especially since 82 percent of today's women favor gender equality compared to just 40 percent back in 1970, according to T. But there are still challenges facing women today, particularly when it comes to equal pay. Women today still make 78 cents for every dollar earned by men, which is pretty paltry considering it's just a 15 cent improvement from what women were making on the dollar nearly 60 years ago.

Women have yet to truly achieve the gender equality Steinem envisioned when she began her work decades ago. But take solace in Steinem's achievements, which show the modern feminist continues to have a fearless leader who's still fighting the good fight, even at age 81.

She Went Undercover As A Playboy Bunny

Really. For an assignment for Show magazine, Steinem got hired as a bunny ear-clad waitress to work in the exclusive gentlemen clubs. The 1963 article, "A Bunny's Tale," shed light on how women were often exploited in the boozy establishments, where demands for sexual favors were common. The story was a big hit, but Steinem would often say she struggled to find jobs afterward because employers didn't take her seriously since she was, at one time, a real Playboy Bunny.

Her Feminism Stemmed From Abortion Rights

Steinem has publicly spoken about an abortion she had when she was 22 and stranded in London awaiting her student visa. While covering an abortion speak-out for New York magazine, she felt something "click" and the experience sparked her activism as a feminist. Steinem is a staunch pro-choice supporter and argues, quoting the lawyer and activist Florynce R. Kennedy, that "if men could get pregnant, abortion would be a sacrament."

Ms. Magazine Has Been In Production For More Than 40 Years

Ms. magazine, which Steinem co-founded along with Dorothy Pitman Hughes, began as a liberal feminist insert in New York magazine before becoming its own stand-alone publication. Its first issue appeared in January 1972 and featured the iconic Wonder Woman under the banner "Wonder Woman For President." According to T, ABC News anchor Harry Reasoner said Ms. would "run out of things to say" and go out of business in six months. Ms. has been in publication for 513 months straight.

When her story "Battered Wives: Help For The Secret Victim Next Door" came out in 1976, marital rape was criminal in just one state: Nebraska. Marital rape has been illegal in all 50 states since 1993 (though different laws continue to allow for loopholes in the system). Steinem also penned a gender equality essay for TIME magazine called "What It Would Be Like If Women Win," which envisioned a Utopian society where women were in charge. In that world, "Lesbians or homosexuals will no longer be denied legally binding marriages, complete with mutual-support agreements and inheritance rights," she wrote. That was in 1970 — 45 years before the Supreme Court legalized gay marriages nationwide.

She Was A First-Time Bride At Age 66

Defying traditional marriage timelines, Steinem was 66 when she got hitched to David Bale, a South African entrepreneur. "Though I’ve worked many years to make marriage more equal, I never expected to take advantage of it myself," she said via a release by Voters for Choice. Bale died of brain lymphoma in 2003. By the way, that would be the same "Bale" as actor Christian Bale, which means Steinem is also stepmother to Batman.

Check out T Magazine's Steinem tribute for a more complete look at the feminist icon's legacy.

More like this
How The City Healed Five Years On From The Manchester Arena Attack
By Ella Glover
Harry Styles Called For "Backlash" In Powerful Statement On Abortion Rights
By El Hunt
David Schwimmer Doesn't Remember This Classic 'Friends' Episode
By Sam Ramsden
Sandra Bullock, Girlboss Extraordinaire
By Matt Harkins & Viviana Olen
Get Even More From Bustle — Sign Up For The Newsletter