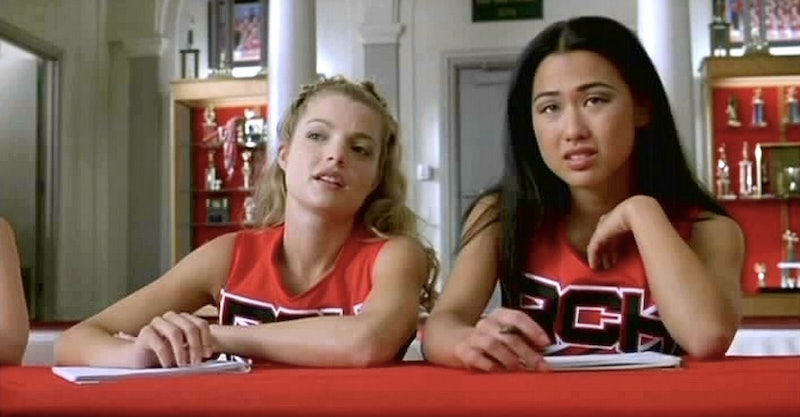 Cue the "I'm so old!" sighs: Bring It On is celebrating its 15th anniversary this year. The cheerleader comedy that launched countless straight-to-DVD sequels was released to U.S. theaters fifteen years ago; from there, Bring It On established itself as one of those teen movies to return to over and over again, providing sleepover entertainment for who knows how many fans over the years. I spoke to actress Nicole Bilderback, who plays mean girl Whitney, about how it feels to hold the legacy of being one of the original Rancho Carne Toros.

Bring It On isn't Bilderback's only claim to fame from the era of platform flip-flops and flared jeans. Whether you realize it or not, she was a fixture of your childhood, with roles in Clueless (Summer, a pivotal element in the post-Val party carpool debate, as you remember); Dawson's Creek, Can't Hardly Wait, Dark Angel, and more. While she's gone on to tackle tons of grown-up projects including 2014's all-female action ensemble flick Mercenaries, Bilderback still looks on Bring It On and the surrounding teen movie boom as an unforgettable time for both actors and audiences.

"Bring It On was just a very special movie," Bilderback says. "Not all movies get anniversary celebrations. So, for it to have carried on: it has this timeless feel... It's held its magic." And part of that magic, according to the actress, is that the movie speaks to a common experience: adolescence. "We all went to high school," she continues. "Whether you liked the cheerleaders or hated cheerleaders, there's still sort of a mutual, universal relation."

Speaking of cheerleaders, Bilderback did exercise her own spirit fingers in her youth. When training time for Bring It On came around, she drew on her experience as a bonafide Texas cheerleader as much as her dance and acting skills. Though that did give her a leg up on some of her co-stars, everyone was put through their paces at four pre-shoot weeks of "Cheer Boot Camp" in order to look like a nationally ranked team of athletes.

"Not only did we have to learn the dance routine and the cheers, but we also did all our own stunts. So we had to learn the pyramids; we had to build up strength for that. We had to learn all the tosses. We learned all that stuff. So it was eight hours a day, and we'd get a lunch break. It was tough. It was a lot of work."

But five days a week of grueling workouts and long nights of partying together ("You know, when you're young, you're invincible!") not only tightened up their routines, it also bonded the Toros as a real squad.

"We were kind of one big group, but I kept in touch and became best friends with Clare Kramer (Courtney) and Bianca Kajlich (Carver). And I remained really good friends with Gabrielle Union (Isis), as well. And Elisha Dushku (Missy). We all kept in touch after the movie for many years." She adds that she has maintained relationships with some of her co-stars to this day.

Unlike her character, Bilderback remembers being "neutral" in high school, despite the cache she would have earned by being on the team. "I was popular, but I was one of those who hung out in all different kinds of cliques. I had all different kinds of friends," she says. So it's no surprise that the biggest impact her roles in so many teen touchstones from that era had on Bilderback personally were the relationships that she made. "Regardless of how much life comes into effect and you can go different paths, you'll always still have a special friendship and a special connection with all these individuals."

That bonding experience can be felt off-screen too. Every person who saw Clueless or Bring It On for the first time as a teenager remembers where they were and who they were with when they did. First time you drove to the theater with your new license? First time sleeping at new friend's house? Bilderback considers herself lucky to be an indirect part of so many formative, personal experiences.

"It's one of the coolest things about it all. I've been hearing from everyone, whether they're old friends or total strangers or someone I've just met, everyone had a truly special story connected to Bring It On or connected to Clueless. They pin it to something special and a very special time in their lives. It had an impact on their lives and it stayed with them. And I really take that to heart. It means a lot to me to be able to be a part of something so huge and to be a part of their lives in that way."

So, 15 years since the Toros took second place to the Clovers in Nationals, Bilderback is continuing to rack up acting credits on film and TV. But what does she think her alter-ego Whitney is up to today?

"As you know, Whitney was special," Bilderback laughs. "I think that Whitney would probably be back at the school as the cheerleading coach. I think Whitney and Courtney together would have come back and coached the cheerleading squad now. And they'd still be up to the same snobby, crazy antics."

If you're interested in seeing just how that would go down, you're not the only one. "I think it'd be kind of cool for the studio to make a reunion special film," Bilderback suggests. (And she's not the first member of the original Bring It On cast to do so.) "Wouldn't it be funny if we're all older and we come back and we're trying to rehearse for some special cheerleading performance? Physically, I could still do it! I kept in physical shape. That would be a really fun, great idea, and I think people would see it too."

Four more weeks of Cheer Boot Camp, and that cast should be ready to slide back into their spanks. I've practically bought my tickets already.