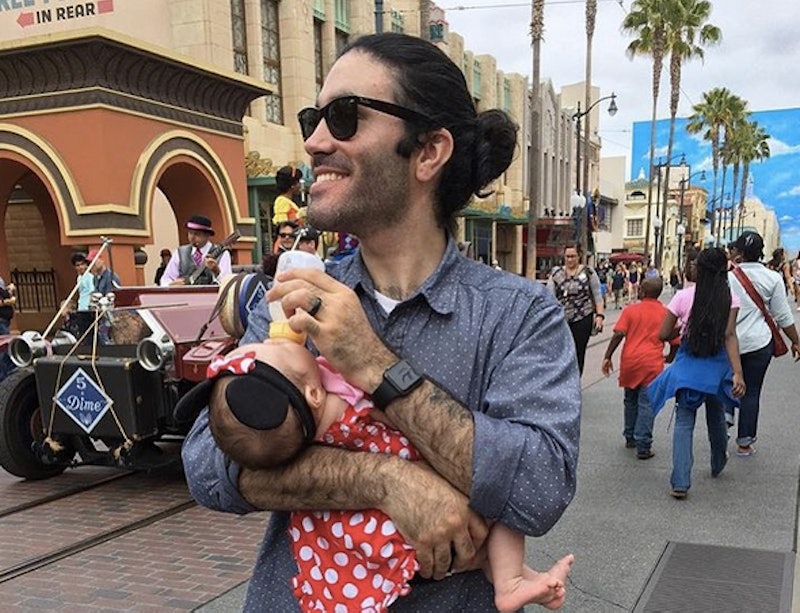 If you thought you were living your dream life right now, you're wrong. Someone is living your dream life — and it's the internet heroine who launched the Man Buns Of Disneyland Instagram account. Yeah, you read that right. If you thought that having a man bun and enjoying the magic of Disney were two mutually exclusive states of being, Christy, a twentysomething who lives closer to Disneyland than you do in your dreams, is here to set the record straight. We CAN have our cake and Instagram it, too!

"Since I have an annual pass, I'm always at Disneyland," Christy wrote to Bustle. "I remember being in line for The Jungle Cruise and I saw a dude rockin' a beautiful man bun and my first instinct was to Snapchat it to a friend. After that, I spent the rest of my day "spotting" man buns just for the hell of it. I found a lot of good ones, and assumed other Disney-goers could find some too, so I started the page."

Since we are living in the era of the rise of the man bun, I am delighted to see that there seems to be no shortage of fuel for this Instagram. In fact, the idea has taken off so well that people have started submitting their own Disney man buns. Can we all just take this opportunity to recommend that the Disney princes themselves follow suit? I mean, we already know it would work. The men of 2015 have, fortunately, gotten on Li Shang's level, and it's time for the rest of us to follow suit. Why deny the universe this man bun bliss? I mean, come on, guys:

THAT'S RIGHT, all you naysayers. You thought you wouldn't be impressed with this and then you took one look at those pictures and realized you don't have a choice. You can't escape the mystification of the modern man bun.

"I think people like Man Buns of Disneyland because it's the right amount of ridiculousness," wrote Christy. "Man buns are a growing trend so that's an easy crowd to appeal to, but having people 'spot' them at Disneyland specifically brings it to the next level. It makes people say, 'wait, what? this is actually a thing?' and I think that appeals to the quirkiness in people."

I think we all had a man bun awakening at some point in our lives. Mine happened just now, scrolling through this Instagram. (Thanks, Mickey Mouse.) So how did it all start for Christy?

"Ugh, there's something about a guy with a man bun that I find really attractive," she wrote to Bustle. "They are just different, and that's interesting. It's refreshing to see a different hairstyle than the average male hair cut. And there is an air of confidence that goes along with that, since it takes a certain guy to pull it off (I mean, have you seen Brock O'Hurn?) Plus, long hair on a guy is just sexy. Put it in a man bun, and I'm sold."

SO ARE THE REST OF US. If anybody needs me, I'm on a one-way plane trip to go see the REAL Disney princes in Disneyland. (I assume Harry Styles and his man bun brethren are not far behind.)

Be sure to follow Man Buns Of Disneyland here, if you think your heart can take it.