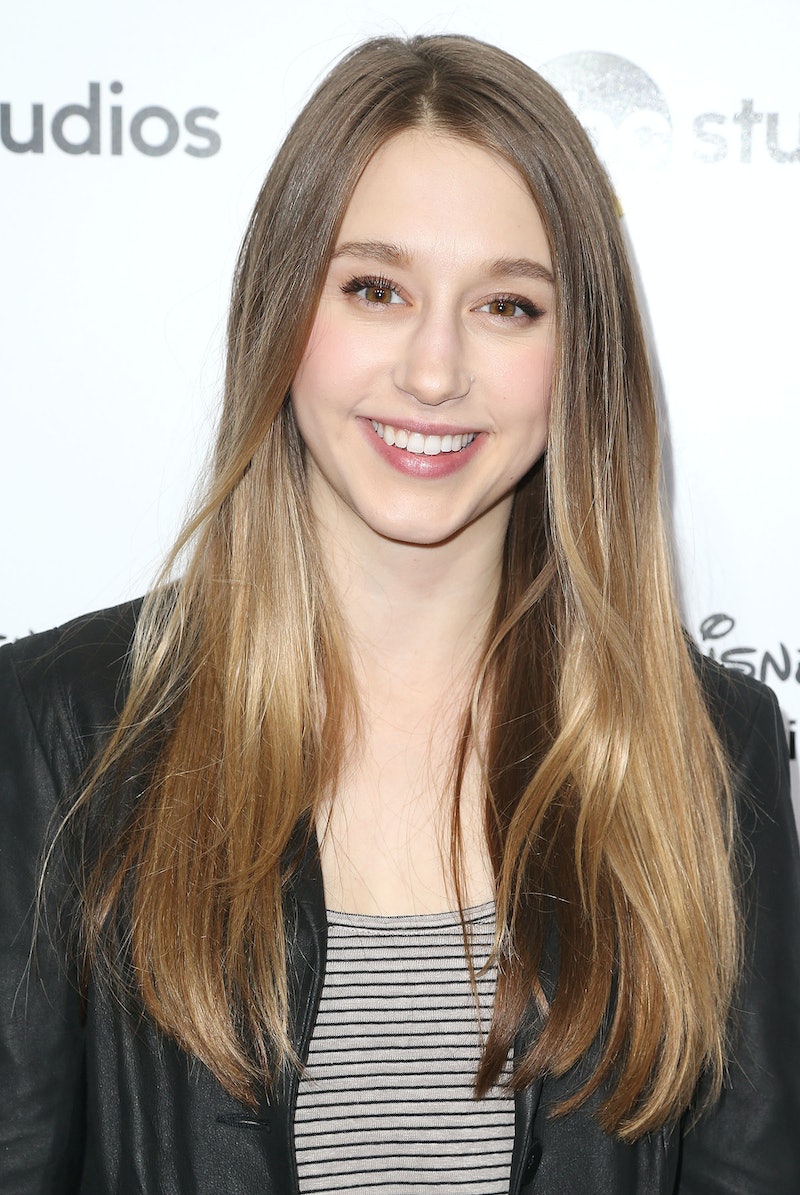 Taissa Farmiga is scared of horror movies. Which wouldn't be so unusual — if she wasn't starring in them all the time. The 21-year-old actress got her start on American Horror Story: Murder House; came back for another round with American Horror Story: Coven; stars in a horror comedy, The Final Girls, out Oct. 9; and has Wicked City, an ABC drama about serial killers stalking L.A., set to premiere this fall. Her latest project, the indie drama 6 Years, may not be full of blood and gore — but it is, without question, one of the most depressing movies you'll see this year. For someone who hates horror this much, Farmiga seems to be drawn to darkness — and personally, I just don't understand.

"Me too, man," she says, laughing. "I hate being scared. I have such a light soul and heart, and I love to be happy, and I don’t like watching things that terrify me and put me in those moods. But the thing is, I’ll go and get paid to be scared — I get to be on American Horror Story, you know? So it’s funny, I don’t know how it works, but somehow it does."

That's an understatement; although her first acting role only came four years ago (the drama Higher Ground, in which she played the younger version of Oscar-nominated older sis Vera Farmiga's Corinne), the actress has built a truly remarkable career. There's AHS, Wicked City, a Warren Beatty movie currently in the works — but perhaps most impressive is 6 Years, out now. The romantic drama stars Farmiga and Ben Rosenfield (Greetings From Tim Buckley) as a college-age couple confronting their relationship's fragility for the first time. It's an intense, painful movie to watch, and it's anchored by two astounding performances from its lead actors. As Mel, Farmiga is heartbreaking; as she realizes that the future she's imagined for herself might not come true, she breaks down, showing real, rough vulnerability.

"It was kind of therapy in a sense, for me, going through that," says the actress. "It’s tough to deal with the same things I’m going through in my own life, just being young."

Part of what makes the movie so difficult is the rawness of communication between Mel and Dan; when confronted with their problems, they don't know how to react. Mel lashes out, often violently, while Dan insulates himself from reality.

Says Farmiga, "I understand not knowing how to say what you’re feeling... and I know how frustrating that could be. It was nice to kind of explore that with Mel, because I learned it’s okay to not understand, you know? But you still have to try and handle it in the best way you can."

Still, the actress admits that some moments were "emotionally depleting," and that the shoot took a real toll on her. One scene, where a drunk, half-asleep Mel is nearly raped by an acquaintance, was particularly raw.

"That was a difficult moment," Farmiga says, calling the scene "unsettling." She says that the cast and crew worked to ensure that everyone felt confident about the event, and that it all felt "real and believable." They have nothing to worry about there; the scene is profoundly — to use Farmiga's word — unsettling, and it speaks to the film's unwavering commitment to reality. Not a moment goes by in 6 Years that doesn't feel honest, often brutally so, from Mel and Dan's fights to their relationships with their parents to the looks on their faces when they come to terms with the worst.

"That’s what I loved about this movie," says Farmiga. "It’s difficult, but in the best way... we had to just find the ways to say things, and you have to get that from something real, from something in yourself."

Farmiga says that improvisation was used heavily in the making of the film; at the beginning, there wasn't even a full script, just a treatment with some pictures to provide context. The stars, and director Hannah Fidell (A Teacher), spent a few days in the Berkshires prior to filming to flesh out the story and discover who Mel and Dan really were, and when it came time to film, both actors were able to channel the passion and thought-process behind their characters.

"Having the freedom just to be in a scene with Ben and just say what we feel... I think that’s great, especially when telling a story like this that’s so raw and real, and you want it to be relatable," says Farmiga.

The actress says working with Fidell helped her get an even deeper understanding of who Mel was.

"There’s something about working with a female director, because you can just... relate on a set, on a different level," she says, adding that Fidell, whose life as a 20-something were similar to Mel's, helped talk her through the character's experiences. As a result, Farmiga's perception of Mel changed over time; at the beginning, she says, she believed that there was no reason her relationship with Dan shouldn't work out.

"I think maybe back then, I was a little bit more like, 'aw, just work through it', you know?" says Farmiga. "'All problems can be fixed.' And I think now, a year, year and a half later and growing up so much and dealing with my own stuff, I think that it’s okay to take time for yourself, and focus on who you are."

Lately, she says, that's been reflected in being a bit pickier in choosing roles; Farmiga says she's moved away from taking on "boring and cliche" characters who don't feel real, and that she only wants to do projects "that make sense to me."

"I’m kind of selfish in the way I choose characters, because I love having someone who helps me figure out something in my life," she says.

Mel, she says, was someone she could easily relate to — as will the rest of the movie's audience.

6 Years, executive produced by Mark and Jay Duplass and written/directed by Hananh Fidell, is out now, available on iTunes and On Demand.