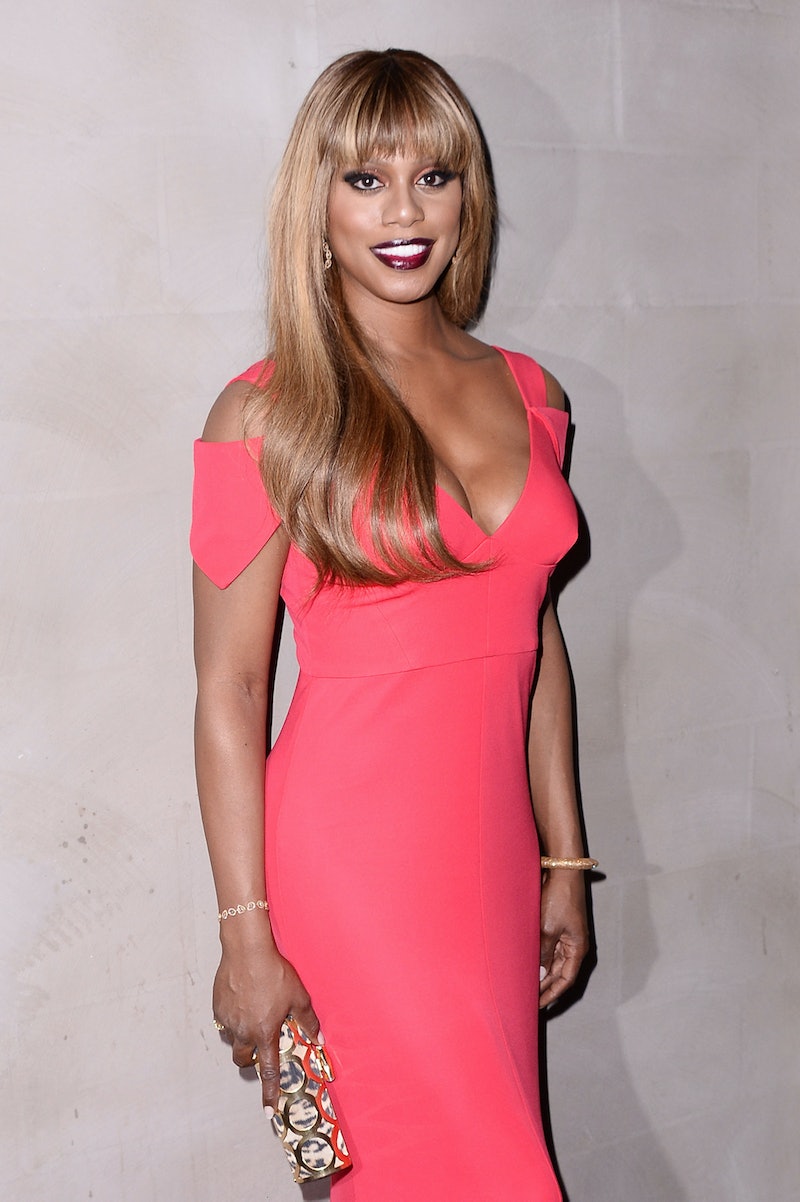 If there's one summer film you should make a priority to see before August ends, it's without a doubt Grandma . Starring a cast of esteemed, phenomenal actors like Lily Tomlin, Julia Garner, Marcia Gay Harden, Judy Greer, Sam Elliott, Laverne Cox, and Nat Wolff, the Paul Weitz-directed film is one of the most inclusive, feminist, honest movies of the year — and it accomplishes it all without so much as batting an eye. Following the story of an 18-year-old girl named Sage (Garner) — who, needing money to get an abortion following an accidental pregnancy, seeks her grandmother Elle (Tomlin) out for help — the film manages to include a diverse set of characters with differing gender identities, sexual orientations, and backgrounds so effortlessly, it sort of makes you wonder how it's possible other films fail to do this when Grandma managed it with no problem. It's projects like these that, as Grandma star Laverne Cox told Bustle, gives her hope for the future of Hollywood.

"Doesn’t it give you hope as a woman that Lily Tomlin, in her 70s, has had a film written for her with a character that is this nuanced and badass and complicated as Elle is?" Cox asks. "Isn’t that amazing? It’s inspiring for me as an actress, as a woman."

Cox, who plays tattoo artist named Deathy in the film, is no stranger to inspiring, influential projects. She's best known for her starring role as Sophia on Netflix's Orange Is The New Black, a series that breaks down gender stereotypes and puts women's issues at the forefront — just like Grandma does. The film, which deals heavily with the subject matters like abortion and feminism, is one that the actress is proud to be apart of.

"This decision that Sage has made [to get an abortion] is one of the more difficult decisions that a lot of women have to experience," Cox says. "And I think instead of being political about it, our film is very human about it, it’s very real... I’m just really proud to be apart of the project that is that human and real about this very difficult subject."

It's an accurate observation: While there are a number of films that deal with the subject matter of abortion, which is something that many women encounter during the course of their lives, not many deal with it as honestly and without bias. For every film like 2014's Obvious Child , there's someone wondering if "Hollywood hit a new low" by producing a film that approaches the topic without bias. With the conversation surrounding abortion at the forefront of politics, there's no better time for a film like Grandma to approach the subject with the respect that so many women who have gone through it firsthand deserve.

It's an important subject to Cox. "It’s just so powerful. Women I know who’ve gone through that procedure... it’s traumatizing, it’s painful. I think sometimes that decision is painted in ways that are really not true to the experience. And I love that this film is deeply human in the way that it tackles this very sort of contested issue. It’s really beautiful."

Of her role in the film, Cox tells me she's just as thrilled to be apart of a project that is not only respectful and honest about a topic like abortion, but is also inclusive of characters with differing gender identities and sexual orientations — without letting them be defined by those aspects of themselves. "In the script it says that she’s trans — but it never comes up... it’s not really relevant," she says. "It’s stated in the script that Deathy knew Elle’s deceased partner, and there’s a history there and a relationship there, so that was what was important — not, you know, the demographic information."

Of the role of Deathy — who could have very easily been made into a caricature by someone less talented than Cox — the actresses tells me she looked not only to what could have made Deathy want to become a tattoo artist ("I talked to Paul, and we thought that she was probably an art student of Elle’s deceased partner, who was an art teacher,") but also to her own friends for inspiration. "Her look was inspired by a woman named Lailah Lancing, who I used to work with at a restaurant called Lucky Cheng's, she has these beautiful tattoos — and I sent Paul photos of Lailah and was like, I would love to do a look inspired by her."

Additionally, Cox credits writer and director Weitz for the film's success: "I love him so much, he’s so chill, and so soulful and spiritual. I love… I love when straight men — he’s a straight white man — are as sensitive, and soulful, and smart as he is. He’s written this very pro-woman film and I just love that." When I bring up a reference to poet Eileen Myles in the film — Elle carries around a tote bag with a quote from Myles' Inferno during the course of the film — Cox nods.

"And there’s a lot of little things like that that Paul has in the film... I’m gonna see the movie again tomorrow, and I’m just so excited to find those little nuances. It’s a movie that you can watch over and over again and find nice, very smart things. He’s very learned, that Paul!"

Sure enough, it's nuances both subtle and explicit that shine brightest in Grandma. Apart from the Myles references, legendary French writer Simone de Beauvoir, who penned The Second Sex, is also mentioned — "I just love the reference to Simone de Beauvoir, because I referenced her in my college lecture, as she famously said one is not born a woman but becomes one," Cox adds — in addition to a poignant conversation about all the things that the letter "O" means to women. The conversation surrounding the latter comes about in a scene with Deathy, Elle, and Sage, when Elle requests Deathy give her a small tattoo of the letter on her shoulder. Though Sage hypothesizes it's "O" for Elle's recent ex-girlfriend Olivia (Greer), Elle denies this and observes that the letter "O" means a number of things for women: "Orgasm," "Ovaries," and so on.

"God, it means so many things," Cox notes when I ask her what the letter means to her as a woman. "Original was the first thing that came to mind. As a trans woman, I’m just so cognizant that... there’s not just one way of being a woman. That each woman is an individual and an original. I think it’s about defining womanhood on your own terms and embracing and loving those things that make us uniquely ourselves — so original feels right to me, not only for women, but for everyone. There’s no other Laverne Cox, there’s no other you, so it’s just about being original."

As for Cox's plans now that Grandma is set to hit theaters, though she has upcoming projects (Orange Is The New Black, of course), she's also got her standing as not only an influential figure in Hollywood, but also within the trans community. "For me, it’s always important to always acknowledge those people who’ve come before me — trans actresses like Candis Cayne, and Ajita Wilson — and acknowledge that they are contemporaries that also share this moment in the spotlight with me so that I am not here alone," Cox says.

"I have been very blessed to have the platform that I do have, and I’m trying to use it to lift up and the amplify the voices. My brother reminded me recently, [Dr.] Cornel West always says, 'The negro national anthem is lift every voice and sing,' not just one voice, but lift every voice… and so I’m trying to do as much of that as I can. I’m only one woman, but I’m proud of those moments when I’ve gotten to lift up the voices of other trans folks. I think that’s really what it’s about."

Considering just how much change Cox has influenced in the world, it's definitely safe to say she's been doing just that. Check out Grandma, in theaters August 21.