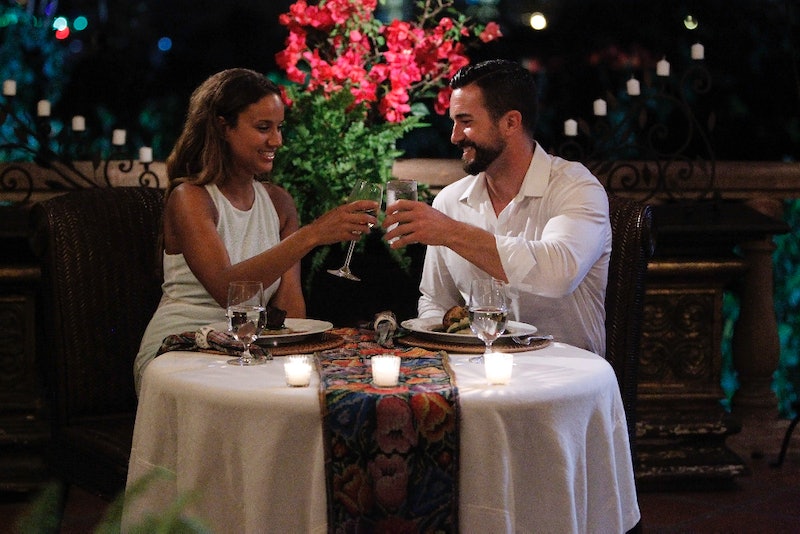 Drama was all over the place last week in Mexico when Amber James' arrival to Bachelor in Paradise casued quite a stir. Much to Ashley S.'s frustration, Dan Cox and Amber immediately hit it off, leaving Ashley S. alone with her thoughts (and some conversations with the animals). But, it can be hard to keep track of all these contestants, so what Bachelor season is Amber from? Amber was a house favorite in Chris Soules' season (and by house favorite I mean she was instant friends with all the girls in the house), but unfortunately didn't make it very far. Chris Soules sent her packing before anyone watching really knew her name.

Now she has a second shot at finding love and she was very open with the fact that she was hoping to meet Dan while on the show. So, she walked in and decided she didn't want the 411 on who was dating who, and instead she immediately asked Dan out. You guys, the sparks were instantaneous. However, in Paradise, the real challenge is keeping someone interested long enough to receive a rose. As we've learned from Dan and Ashley S, feelings can change on the drop of a dime.

Based off what we know about Amber, there are more than a few things Dan can do to win her heart for good.

He Could Give Her A Teddy Bear

In an ode to her entrance on Chris Soules’ season of The Bachelor, he could give her a teddy bear. Seems kind of lame, but hey, she would probably find it charming considering Dan would have remembered her entrance on the show.

Talk About The Bears

She’s a Chicago girl who loves her Chicago Bears. Mention Jay Cutler and you’re probably in. Also the Blackhawks. People in Chicago LOVE their Blackhawks.

According to social media posts, Amber loves her family. If Dan wants to get in with her, he can talk about how close he is with his family and ask about hers.

There is no evidence that Amber eats pizza, but she lives in Chicago, which means that she probably eats Lou Malnati’s. If she doesn't then she’s missing out, but ordering a Chicagoan deep dish pizza is a sure-fire way straight into their heart.

No really though, her social media is filled with pictures of her friends, which are apparently only fellow former Bachelor girls from her season and the guys from Kaitlyn’s season. If you like her friends, you're probs golden.

Offer To Watch The Lion King

According to her old bio from Chris’ season, her favorite movie is The Lion King. So, Dan could mention that or talk about Timon and Pumbaa for a bit.

She was super into kissing Dan. He could probably just keep doing that and be OK. But, we'll find out as Paradise progresses, because things can change before you even say, "Will you accept this rose?"