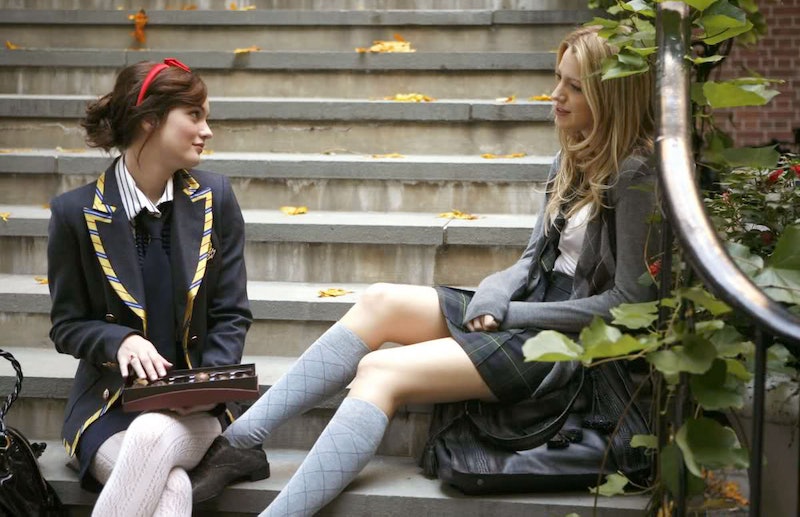 Gosh, are you crazy kids still talking about Pretty Little Liars big reveal of A? God, that makes me feel like a grandma. Being the ripe old age of 24, I truly believe I belonged to the last generation of CW teen dramas, with my head still wrapping itself around the true identity of Gossip Girl. Though I guess the one thing I can relate to is that, like Pretty Little Liars, the dramatic Gossip Girl reveal left a myriad of plot holes in its wake.

Now you, I, and your mom all know the major universe-tearing plot hole that rips through the series like a knife. We'll get to that. But I really want to take the chance to appreciate all the little moments that made no sense whatsoever regarding the continuity of the show. Whether it's your average, everyday pilot mis-step, or a scenario that adds up to zero percent sense, Gossip Girl never disappointed when it came to being utterly baffling.

So flash back with me, children, to the magical time that was 2012, and relive all the Gossip Girl inconsistencies that still keep me awake at night. You know you love them. Xoxo, Dan Humphrey. On, and spoilers ahead!

1. The Early Existence Of Chuck's Mom

In the pilot episode, Nate and Chuck are chatting about Nate potentially sleeping with Blair for the first time. Chuck remarks, "Well, then maybe I should swipe some of my dad's viagra or my mom's paxil." Except, um, Chuck reveals in a heart-to-heart with Dan several episodes later that his mom died in childbirth. That's a pretty glaring mistake, but, because this is the pilot episode, we can write it off — along with the fact that Nate and Chuck take the bus, and Eleanor is played by an entirely different woman.

2. Literally Everything About Chuck's Mom

But that doesn't excuse this. When it's alleged that Chuck's mom is really alive in Elizabeth Fisher, we just thought it was some retconning at work. Then, in Season 5, there was another reveal that Bart cheated on Elizabeth with Diana Payne, and she was Chuck's mom. And then this was revealed to be false, and Elizabeth sent a picture of herself pregnant to Nate saying, "I'm tired of all the lies."

As far as I'm concerned, the debate on who's Chuck's mom rages on, because you know what? She's lost my trust. I mean, how on Earth could she keep herself off the grid and out of the news for so many years? These are highly publicized people! Which brings me to the next point.

3. Literally Everything About Chuck's Dad

I know he's a rich and powerful man, but there are so many logistical things that make it near impossible to fake his own death. So many.

4. Where Is The Humphrey Loft?

The pilot episode establishes the Humphreys as living in Williamsburg, and plenty of the initial exterior shots filmed in the area do, too. Later, however, the Brooklyn scenery switched to DUMBO, and Jenny, likewise, was getting cabs to pick her up from DUMBO. So, where do they live? Gossip Girl's executive producer Stephanie Savage explained this early in the show's run, but, without said explanation, it's still a confusing real estate conundrum.

In the prom episode, which is divided up by the aborted Valley Girl pilot, we see young Lily and Carol deal with an atypical rich '80s jerk Keith Van Der Woodsen. Oh, Serena and Eric's dad, right? But, wait a minute, when we meet the adult Dr. Van Der Woodsen, his name is now William. Was Keith a brother or cousin? Did he just rename himself William? It's just never explained.

Hey, remember Juliet Sharp? She was the sister of that teacher Serena wanted to date? But one thing that always stuck me as peculiar is the fact that his scheming with Juliet was done mainly over text message. Um, I think it's fair to say you can't casually text in prison.

When Serena runs into Fake Cousin Charlie (aka Ivy Dickens), the two reminisce about the last time they hung out, which was on a yacht when they were about 12. However, when Real Cousin Charlie (aka Lola) confronts her mom, she mentions being hidden from the family she never knew existed. So, wait, has Carol been hiring stand-ins for Lola since she was a pre-teen, or...?

What can I say? From posts that go up when he's mid-make out with Serena to his baffled facial expressions when nobody else is around, Dan being Gossip Girl still confuses and baffles the fandom at large. For further reading and snark, please consult any number of hilarious tumblrs about the big reveal.

So, you see, even a show as great as Gossip Girl had moments that made fans scratch their heads, squint their eyes, and try to puzzle their way to a satisfactory answer that covered as much of the plot hole as possible. None of this, of course, means that Gossip Girl isn't still fun to watch even now. In fact, it's even more enjoyable, because there's an entire community on the Internet who are just as confused as you are.

More like this
Jesse Tyler Ferguson Had A Funny Run-In With A Fellow ‘Modern Family’ Alum
By Grace Wehniainen
“The Door Is Always Open” For Another 'Breaking Bad' Spin-Off, Says AMC Boss
By El Hunt
The 'Stranger Things' Writers Revealed 2 Tragic Unscripted Finale Moments
By Grace Wehniainen
18 Unanswered Questions From 'The Hills' That Still Haunt Us Today
By Ivana Rihter
Get Even More From Bustle — Sign Up For The Newsletter