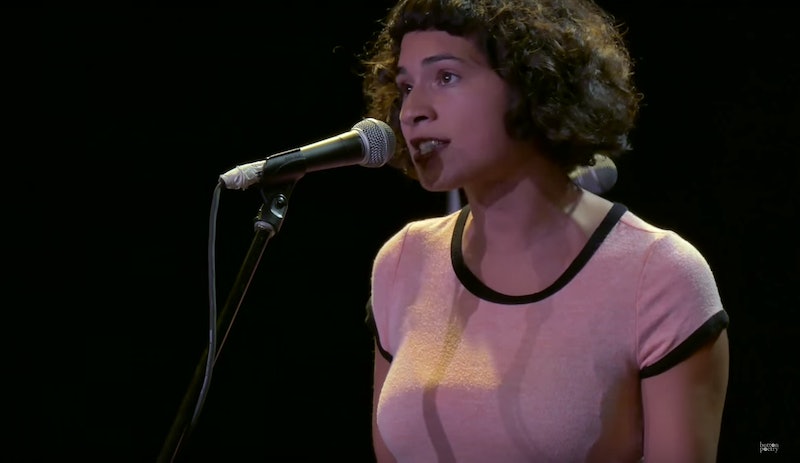 From making a big deal out of the word "like" to complaining about "upspeak," there's no shortage of people who want to criticize the way women — especially young women — speak. It's enough to make anyone angry, as you can see in Melissa Lozada-Oliva's spoken word poem "Like Totally Whatever" — because, like, maybe this trend is not so good or whatever? Seriously. The policing of women's language in general and that of young women in particular needs to stop. Now.

And it's not just stogy old white men; even prominent feminists have espoused the view that young women just need to start speaking properly already if we want to be taken seriously.

In response, let me just say this: Um, I'll, like, pass? Or whatever?

As Melissa Lozada-Oliva points out in her poem, the problem isn't how young women speak. The problem is the world that forced women to adopt vocal defense mechanisms; it's the world that defines proper speech as whatever old, white men are doing; and it's the world that generally refuses to respect what young women have to say unless we say it exactly the way they want us to say it. And she does it in a way that is thought provoking and sophisticated — and also peppered with "likes" and upspeak.

Here's what it's like to be policed for your language:

Why would they ever be granted direct access to anything?

"Like the hyper masculine words were the first ones to raise their hands."

Of course, that's why no one can listen to them. Not because of their own biases.

"It's like F. Scott Fitzgerald and Ernest Hemmingway were geniuses for turning women into question marks."

Listen to the whole poem, upspeak and all, and realize that quintessential "female" ways of speaking don't actually diminish the message at all.

And you can find more of Melissa Lozada-Oliva's poems here and here.

More like this
How To Fight For Reproductive Rights, Based On How Much Time You Have
By Courtney Young
5 Ways To Stand In Solidarity With Women In America From The UK
By Sophie McEvoy
34 Quotes That'll Inspire You On Juneteenth & Beyond
By Syeda Khaula Saad and Siena Gagliano
The Most Powerful Photos From The Weekend’s Abortion Rights Protests
By Melanie Mignucci
Get Even More From Bustle — Sign Up For The Newsletter