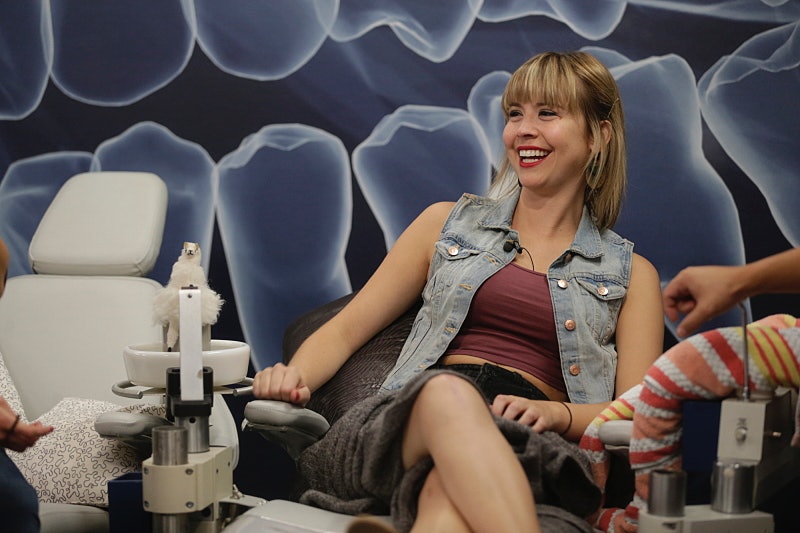 Some might say that there isn’t much that the evicted houseguests on this season of Big Brother have in common. You know, except for having been evicted from the Big Brother house and all. Coming from all walks of life and from different parts of the country, these houseguests have very little that connects them all to each other. Except for one thing: Meg Maley. That’s right. Sweet girl Meg, the houseguest that everyone loves. Apparently she’s not as sweet as she seems. Because every single one of the houseguests who has recently been sent home has had one thing in common: They have all slept in Meg’s bed.

So does that mean that there is more malice to Meg than we originally thought? Is she more vixen than victim? Is she, perhaps, cursed? Before we go on an all-out witch-hunt here, let’s take a look at the proof that has cropped up, because there’s some pretty damning evidence against her. Like the fact that the houseguests who have gone home recently have all slept in bed with her—or at least gotten a little too close to her in the case of Clay.

Let’s break this down: Becky was the first houseguest to notice the alleged curse. She brought it to Meg’s attention on August 14th in a conversation about the fact that Da’Vonne, Jeff, Jason, and Jackie were all sent packing after sleeping in Meg’s bed. So is it any surprise that Becky was the next houseguest to go after pointing out this trend? Because if Meg really is cursed, the most obvious choice of who to send packing next would be the houseguest who is onto the fact that she is cursed.

Although that might be giving Meg too much power. Maybe she’s the victim of the curse, not the controller of it. If this curse is legit, then poor Meg is sure to suffer just as much as the other houseguests have. Unless it’s like a virus that she’s the carrier of? You know, like the dude in college who gave everyone else mono but never got it himself? Maybe Meg is just the carrier of eviction notices and will never actually get one herself?

Listen, it’s most likely just chance that the people who sleep in Meg’s bed are the people to be sent home. But just in case it’s not, let’s use this trend to guess who is going to be evicted next. Based on Wednesday night’s episode and the little montage of James and Meg flirting their brains out, my money is on James being up next. Unless it’s like a fairy tale and their love can break the curse? All the more reason to make this showmance happen.

And for more Big Brother, check out Bustle's podcast, The Diary Room.