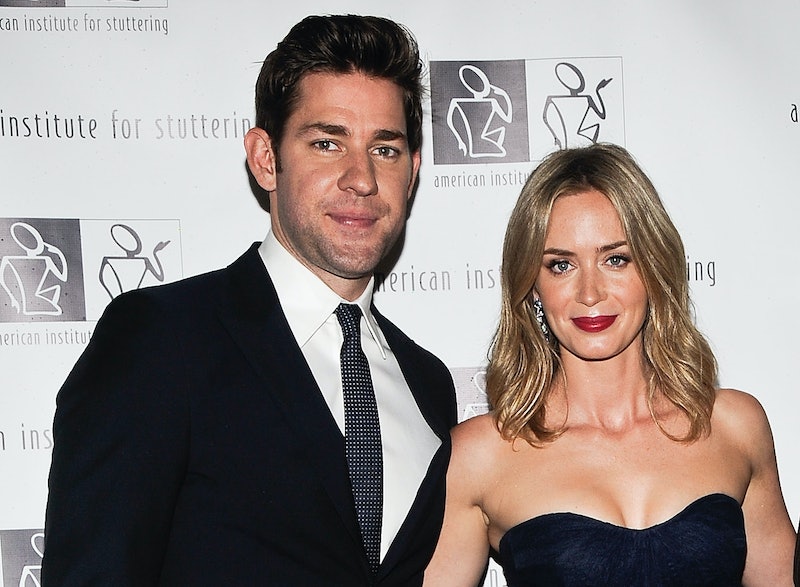 When it comes to #RelationshipGoals, two people that instantly come to mind are Emily Blunt and John Krasinski. Not only have these two actors individually stolen our hearts during their time onscreen — their imitable chemistry seen outside of fictional roles is cute enough to surpass the glory that was The Office's Jim and Pam storyline. After beginning a courtship in 2008, Blunt and Krasinski tied the knot in 2010, and welcomed a daughter in 2014. With more than half a decade of love worthy of ever squee imaginable, the couple's affection for each other hasn't waned even a smidge.

In a Monday, Aug. 22 report from People, Krasinski gushed over his wife, and detailed how their relationship has only gotten better over time. "It's one of those things, I'm having more fun now than the day I met her, and it's pretty wild," he said. The actor went on to note how fatherhood has brought an entirely new level of joy to his home life. "I remember Steve Carell said to me, 'If your old life was your favorite book, then after you have a kid you are picking up a totally different book that is now your new favorite book.'"

Krasinski and Blunt's road to marriage and family has been peppered with several amorous moments that fans have been lucky enough to see (thanks, Internet and television shows). It should also be noted that these two basically originated the art form known as Lip Sync Battles — which makes them the ultimate in #RelationshipGoals right there. In celebration of this phenomenal couple — and proof that love isn't dead, after all — let's take a look back at seven moments that made these two #RelationshipGoals.

1. When Krasinski Described His Adorably Awkward Meeting With Blunt

Krasinski had a feeling he would fall in love with Blunt from the moment the two met. The fact that he greeted her with a stammering, "I like you!" during a handshake may be the best introduction of all time.

2. The Time They Pranked Jimmy Kimmel

The couple who pranks together, stays together.

3. When Krasinski Rushed The Stage During Blunt's Acceptance Speech

When Blunt won a 2015 Critic's Choice Award for her work in Edge of Tomorrow, upcoming presenter, Krasinski, ran out from backstage to give her a hug, kiss, and celebratory "YAS!" I can't even.

I would tune in to any program exclusively to see these two standing next to each other.

5. When Blunt Doused Krasinski For The ALS Ice Bucket Challenge

After attempting to get off easy with a quaint mug of ice water, Blunt casually appeared to douse her bae. Love. It.

6. When Krasinski Took Blunt To A Gun Range

For reasons unknown to everyone, Krasinski was convinced that Blunt wouldn't pick him as her lifetime bae. He decided to take her to a gun range as an off-kilter first date, and ended up — ahem — blowing her away. The fact that Krasinski "yelped" upon firing a gun is reason alone to lock a relationship down. The adorable awkwardness of it all is more than my fluttering heart can take.

After welcoming their first daughter, Hazel, in 2014, the proud parents shared this precious photo on Twitter. Their daughter is the epitome of cuteness, which comes as a shock to no one.

Are you now chock full of the best feels imaginable? Fabulous! My work here is done.