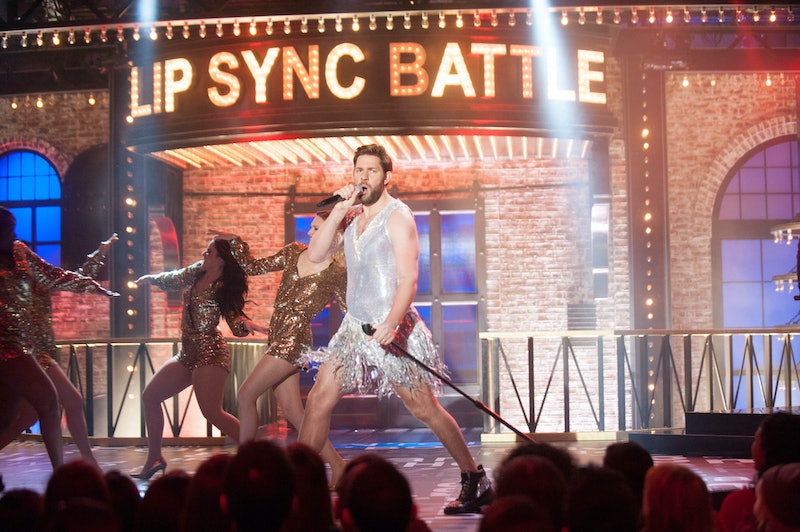 Lip syncing fever is sweeping the nation — it started with Jimmy Fallon's late-night show segment and now Spike's new TV show Lip Sync Battle has been renewed for a Season 2. From Dwayne "The Rock" Johnson to Anne Hathaway, how does Lip Sync Battle land so many famous celebrities? Spike TV's president Kevin Kay said the network wanted "to soften up the programming lineup," and soften it it did with the lighthearted Lip Sync Battle. The premise is simple with two celebs going head-to-head to compete in lip syncing. And I'm not talking Dancing with the Stars-level celebs here, I'm talking bonafide A-listers. So how does Spike do it?

The stars compete once in a simple competition similar to the segment on The Tonight Show Starring Jimmy Fallon — no frills, just lip syncing. And then again with a rehearsed, choreographed, costumed performance with backup dancers and props. But Jimmy Fallon wasn't the one to come up with the segment's premise. Back in 2013, The Office alum and adorable man John Krasinski came on Late Night with Jimmy Fallon and had suggested they compete in a lip sync battle. Thus, the segment and the show came about — with Krasinski as a producer.

Entertainment Weekly reported that celebrities are stoked to join in on the fun (including Empire's Terrence Howard who will battle costar Taraji B. Henson in an upcoming episode). Let's take a look at how Krasinski's star power has helped make the show a hit by bringing in some serious celebs.

Well, this one is a bit obvious, but movie star Emily Blunt and Krasinski are married — and the most adorable couple — in real life. The pair have a child together, so why not share their love of lip sync together? She did help Krasinski come up with the idea to lip sync on Fallon's show after all. Let's hope they can get other late-night show host — and neighbor of their's — Jimmy Kimmel on the show for Season 2.

Host and producer of Lip Sync Battle, LL Cool J, made it clear that when Blunt and Anne Hathaway competed against one another that it was a The Devil Wears Prada reunion/battle. Hathaway and Blunt were costars in the 2006 film and since Blunt's character Emily was always bullying Hathaway's Andy, it must not have been hard for Blunt and hubby Krasinski to get the Academy Award-winning actress and singer on the show.

Krasinski made his first appearance on the show (I'm just assuming there will be others) when he went up against Anna Kendrick — yet another actual singer not using her vocal powers. He directed the upcoming film The Hollars , which he stars in alongside Kendrick as her boyfriend. And I'm sure it didn't hurt that Kendrick had previously starred in Into the Woods with Blunt. Kendrick's first lip sync performance to One Direction's "Steal My Girl" was pretty much dedicated to Blunt as she sported a shirt that had a photo with her and Blunt in a heart shape.

Although these men are stars on their own, they have recently been billed together due to their Academy Award-winning song "Glory" from the film Selma. When they challenged each other on Lip Sync Battle, it brought the duo's awesomeness to a whole other level. Getting them on the show must have not been too difficult since Legend is married to the show's "colorful commentator" Chrissy Teigen, and Common and LL Cool J both starred opposite Queen Latifah in rom-coms (Common in 2010's Just Wright and LL Cool J in 2006's Last Holiday).

Although rapper LL Cool J and boxer Mike Tyson have had issues in the past, I'm fairly confident that Cool J's involvement on Lip Sync Battle helped Tyson to do the show. The down-for-anything Tyson performed Salt N Pepa's "Push It" for his second performance, but comedian Terry Crews deservedly beat out the heavyweight champ with his rendition of Vanessa Carlton's "A Thousand Miles." Maybe Tyson would have had more success if he had went for Phil Collins' "In the Air Tonight" instead.

The cohost of Live! with Kelly and Michael, Michael Strahan will be up against fellow daytime host Hoda Kotb on Thursday, April 30's Lip Sync Battle. Both Krasinski and Blunt have been on Strahan's show with Kelly Ripa promoting their other projects. Krasinski was on the show back in May 2011 for his film Something Borrowed and Blunt was on in Dec. 2014 for Into the Woods. I'm sure it wasn't challenging for the charismatic couple to get the affable Strahan on Lip Sync Battle. Plus, Strahan had already done a dance battle with Tyson's Lip Sync Battle opponent Crews on his own show.

Since the premise of Lip Sync Battle was introduced on his late-night show and he's a producer, it only makes sense that Jimmy Fallon returned the favor by appearing on the Spike version. He lost to Dwayne Johnson, but I have a feeling that the lip sync expert Fallon will be back again.

Stephen Merchant will be on the May 7 episode of Lip Sync Battle challenging Malin Akerman, but Merchant is actually responsible for creating the lip sync party game with Blunt and Krasinski on a road trip, according to The Hollywood Reporter. He serves as another producer of the show and he's no stranger to the art of lip sync. Merchant performed lip sync on The Tonight Show Starring Jimmy Fallon against Fallon and Joseph Gordon-Levitt. Although the founder of the game didn't win, I think he totally deserved first prize for his lanky performance of Beyoncé's "Single Ladies (Put a Ring on It)."

If you think the collaboration of the British Merchant and American Krasinski is odd, don't forget that Merchant created, directed, and wrote the original U.K. The Office alongside Ricky Gervais, and Krasinski starred in the U.S. version. So besides thanking these friends for The Office, we now also need to thank them for the ridiculousness that is Lip Sync Battle.

So that solves the mystery of how Lip Sync Battle keeps the celebrities rolling in, so onto my next question: how do I become a backup dancer on Lip Sync Battle?

More like this
You'll Never Guess Which Hollywood A-Lister Big Mo Is Related To IRL
By Sam Ramsden
Here’s Everything Coming To & Leaving Netflix In July
By Grace Wehniainen
Paramount+ Wants To Take Over Your Netflix
By Sophie McEvoy
What’s New On Netflix: The Return Of 'The Umbrella Academy'
By Arya Roshanian
Get Even More From Bustle — Sign Up For The Newsletter