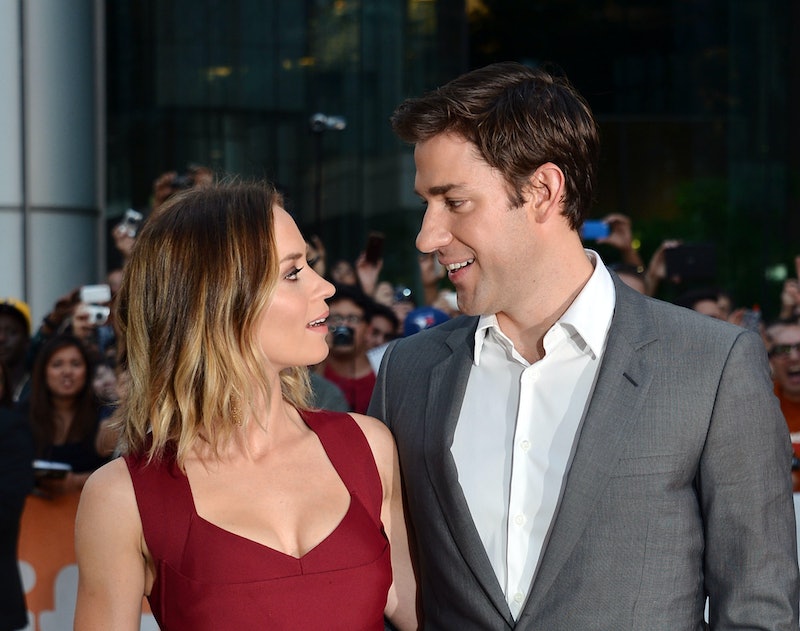 When it comes to fan-favorite fictional couples, Pam and Jim from The Office rank high on the list. But off screen, John Krasinski's real-life romance with Emily Blunt is pretty beloved as well. They're both talented actors, who starred in their first project together, A Quiet Place, last April. Of course, The Office fans are well-versed in Pam and Jim's Dunder-Mifflin meet-cute, but not everyone knows that how John Krasinski and Emily Blunt met traces back to the NBC series as well.

It was love at first sight, according to Krasinski, who began dating Blunt in 2008. When Krasinski appeared on The Ellen DeGeneres Show in 2011, he confessed,

"It was one of those things where I wasn't really looking for a relationship and I was thinking I'm going to take my time in LA. Then I met her and I was so nervous. I was like, 'Oh god, I think I'm going to fall in love with her.' As I shook her hand I went, 'I like you.'"

Krasinski added, "It's one of those things where as soon as you meet someone you kind of know." Likewise, Blunt has spoken highly about her husband. She previously told InStyle, "Meeting John really changed my life. When I feel the support that I have from him, I feel invincible."

Making their love story all the better, Krasinski credits The Office for helping him meet Blunt. Before he was cast as Jim Halpert, he actually contemplated quitting acting, but stuck it out and landed his Office gig. "It's a little bit of an existential crisis after a while, because I wouldn't have met my wife, I wouldn't have been out in LA," he recalled on Today in 2012. "Truly, when I say the show has given me everything, it's given me everything."

Blunt and Krasinski's first date was atypical to say the least. As Krasinski recalled in a 2012 Conan interview, "I decided, 'I’m gonna really hit the gas and bring her to a gun range.' I think that I was so sure that I would never end up with her... that I was like, 'You know what, I’m gonna blow it right away and then that way you don’t feel bad.'" As fans now know, he clearly didn't blow it. In the time since that first date, the couple welcomed two daughters, Hazel, 5, and Violet, 3. And no matter how busy their work schedules become, Krasinski made clear their kids come first, once saying, "That’s non-negotiable."

The pair starred alongside each other in April 2018's The Quiet Place, and they recently wrapped on the sequel, which Krasinski directed as well. When working on the first movie, Blunt stayed by Krasinski's side even for scenes she wasn't in. "She would have incredible ideas and incredible notes on shooting script and on color performances. She’s just the most supportive person to have around," he told Vanity Fair in 2018.

According to Blunt, other people told them working that closely on the movie would lead to a divorce, but in reality, it only made them stronger. She told Vanity Fair, "We discovered new sides to each other that go beyond us being a married couple... We were really in the thick of it together, and it’s brought us closer."

A Quiet Place 2 is scheduled for a March 2020 release, so fans will just have to stay tuned for more insight into the couple's on- and off-screen relationship when the time comes to promote that.

More like this
The ‘Emily In Paris’ Season 3 Release Date Is Here, Plus The First Footage
By Bustle Staff
‘SNL’ Finally Spoofed Nicole Kidman’s Weirdly Beloved AMC Ad & Nailed It
By Stephanie Topacio Long
Jonathan Bailey’s BTS ‘Bridgerton’ Photos Celebrate 6 Months Of “Kanthony”
By Stephanie Topacio Long
'Grey's Anatomy's New Intern Got Advice From Dr. Bailey Herself
By Grace Wehniainen
Get Even More From Bustle — Sign Up For The Newsletter

This article was originally published on Jan. 6, 2015