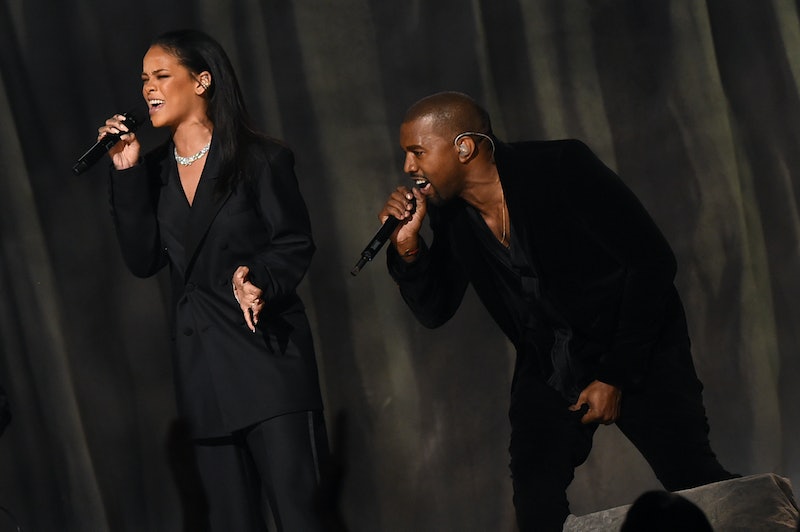 Kanye West dominated as the headliner for Los Angeles' FYF Fest this weekend — but not without a little help from a famous friend. According to Billboard, the rapper spotted pop star Rihanna in the crowd and gave her a mic to sing along. Kanye and Rihanna sang a surprise duet to their hit songs "FourFive Seconds" and "All Of The Lights" at FYF Fest on Saturday night and it was epic, because when these two come together for a performance, they just light up the stage.

West co-wrote and co-produced "FourFive Seconds" with Sir Paul McCartney, who was not present for the surprise performance, but Rihanna decided to come out to watch her friend — and sing along. Yeezy and RiRi sang the chorus together, just like in the recorded version of the tune — this time though, he sang from the stage and she crooned from the concert pit. Once the crowd heard her voice, they went nuts, according to fan videos taken at the festival. "Make some noise for Rihanna in the crowd," West shouted after the song. As his set closed, Rihanna finally joined him on stage to sing her part in his star-studded 2010 single "All Of The Lights."

FYF Fest wasn't the only time these two have rocked it together in a performance — here are some more amazing duets by West and Rihanna:

All three of the big names on "FourFive Seconds" — McCartney, Rihanna, and West — took to the stage at the Grammys earlier this year and belted out the hit tune for the audience. It wasn't a perfect performance, though — no one could hear McCartney throughout and it was suspected that his mic may have been off for the duration.

Kanye and Rihanna performed her hit song "Diamonds" (above) at this exclusive concert she headlined in Arizona during Super Bowl weekend earlier this year — and just like the song's lyrics say, they shined bright on stage. West appeared for a 10-minute set during Rihanna's hour-long performance, according to Billboard, and they also sang "FourFive Seconds" in the set as well.

Rihanna let the guest appearances come to her on stage during her performance at the 2011 NBA All-Star Game halftime show. She sang her hit "What's My Name" with a guest appearance from rapper Drake, and then Kanye emerged from the bottom of the stage to join her for "All Of The Lights" from his album My Beautiful Dark Twisted Fantasy.

If you think Rihanna and Kanye are great together, just add some Jay-Z to the mix and these three music titans are unstoppable. The three performed the hit song "Run This Town" in the above undated concert live at Madison Square Garden. The performance begins mostly with Rihanna and Jay-Z sharing the stage, but once Kanye enters at around 4:20, it's just mesmerizing.

These two need to keep teaming up, because clearly, West and Rihanna are incredible when they're together.